Canyon scratches the itch with an all-new Aeroad 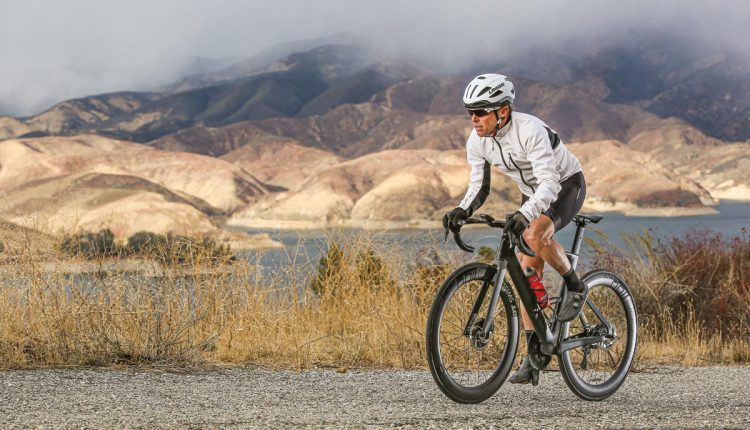 If you’ve been a regular RBA reader, then the German bike brand Canyon needs no introduction. If you haven’t been, then know that Canyon is a fast-growing brand dedicated to the consumer-direct sales model. From the start, the performance aspects of their road bikes have never been in question, owing to their winning tradition in the WorldTour—something rarely found with consumer-direct brands.

Couple pro-level racing success with cutting-edge designs and uber-competitive retail prices, and you have an easy-to-understand brand formula.

The new Canyon Aeroad is the first re-issue of the bike since its inception back in 2014. While the new version looks similar to its predecessor, in fact, it has very little in common with it. Aero is, of course, still the name of the game, but instead of prioritizing between aerodynamics, weight or compliance, this time around Canyon was actually able to provide all three in a unique way. 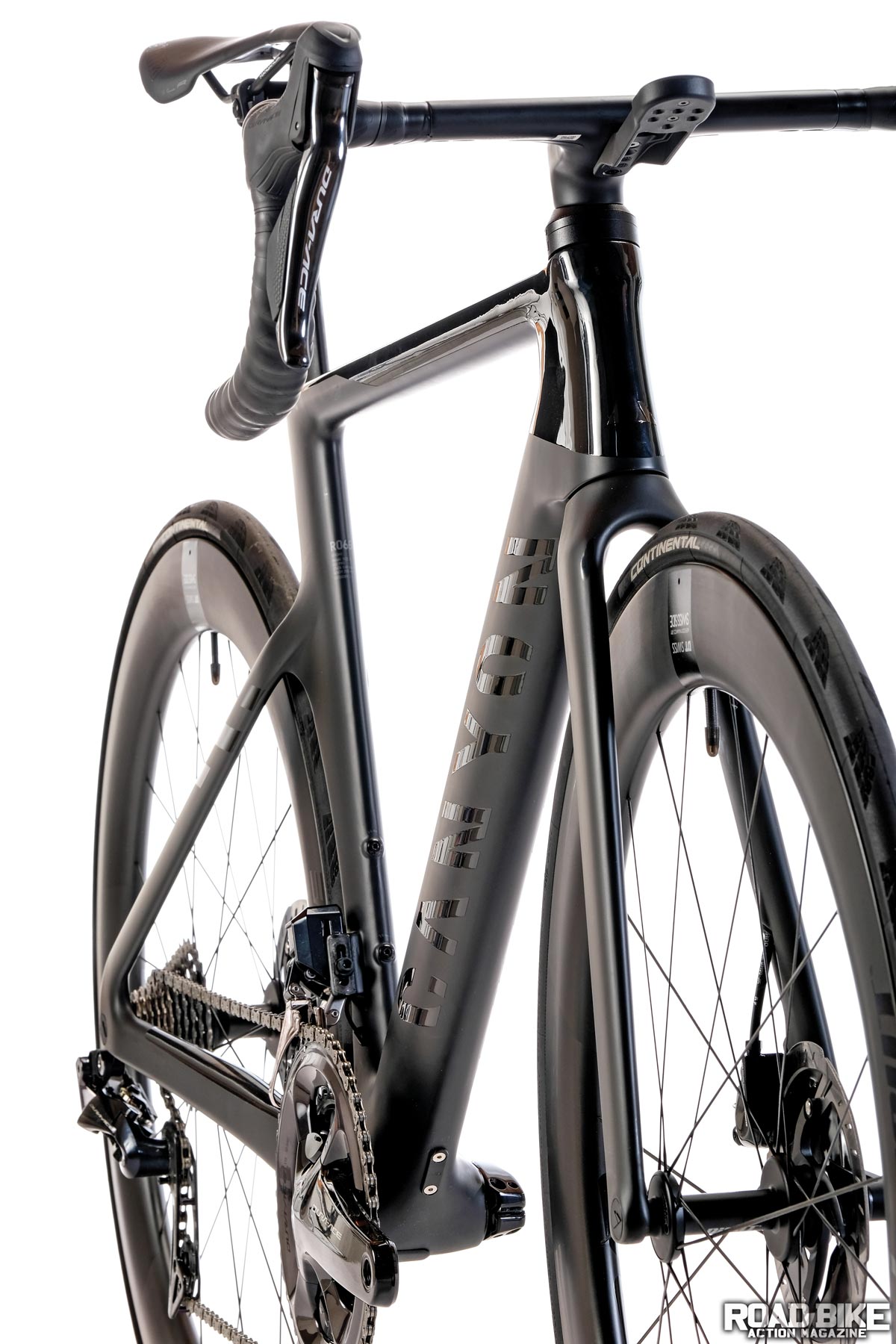 Since “aero” is in the name and there have been some substantial advancements in aerodynamic design knowledge since 2014, from the seat stays to the fork, there are a lot of very small changes made to the new bike.

On top of the new and refined tubes, the Aeroad is only available in disc-brake trim. This then opens the designers up to accommodate a wider variety of tire sizes, as well as slight geometry enhancements. The 98.4cm wheelbase is 3mm shorter with 41cm chainstays that are 5mm shorter.

As far as fit is concerned, the 72.72-degree head tube is now 4mm shorter at 12.6cm. The top tube is 54.9cm with a reach of 39cm and stack of 53.9cm. When comparing this to the previous version, it has a 6mm-higher stack and 1mm-shorter reach. The frame retains the Press-Fit BB86 interface.

The biggest updates to the Aeroad are the proprietary cockpit and seatpost. The Aerocockpit is designed specifically for the new version. The stem has a proprietary wedge design that only fits the Aeroad fork. Besides hiding all the hoses and wires internally, the stem also has a 15mm range of height adjustment. The most unique aspect of the handlebars is that they can easily be widened (via a sliding slot on the underside) from 39cm to 43cm wide via three positions at 20mm increments.

Currently, Canyon doesn’t offer an aftermarket option, so you are locked into the stem length/handlebar width that comes with the specific bike size. Our size-small bike was fitted with a 90mm stem with the 39mm bar that
can adjust to 37mm or 41mm. Currently, depending on the bike size, there are five different offerings: 80–90mm
stem with 41/39/37 or 100, 110, 120mm with 43/41/39.

The new seatpost has a deeper aero profile, but this is combined with a lower clamping location for compliance. The post is also split on the lower portion to add even more compliance.

The CFR model is equipped with Shimano’s Dura-Ace Di2 drivetrain with a 52/36 power meter crank matched to an 11-28t cassette. The bike rolls on tubeless-ready DT Swiss ARC 1100 Dicut 62mm wheels mounted with a mixed spec of a 25mm front and 28mm rear Continental GP 5000. Finishing the build is a Selle Italia SLR saddle with manganese rails.

When setting up our bike, the first thing we did was adjust the handlebars and realized that the internally routed wires and hoses were too short to allow for the widest width (41cm) setting, so we opted for the middle setting of 39cm. The real downside to the telescoping design is it leaves a big groove under the tape on the top of the bars. Sure, it can be covered with tape, but it feels weird on the hand and fingers.

Next is the stem height that has a total of 15mm of adjustment. Sure, it doesn’t require the steerer to be cut after fitting the bike, but there is only 15mm to play with, so unless you like a “pro” fit, you’re going to be out of luck. It wasn’t the easiest to work with and requires a supplied but specific tool.

Next is the seatpost, and the lower third is cut away to apparently provide some added compliance. However, that idea doesn’t really pass the smell test.  We couldn’t quite grasp how the cut-away seatpost design was going to give a better ride. If anything, the cutaway post seems designed to instead allow for added clearance around the seat-stay/seat-tube junction when the saddle nears its lowest setting.

Setup details aside, this bike truly does deliver on speed. It feels fast under you. Even with lower tire pressures the deep tubes and even deeper wheels just want to slice through the air. Even in the windiest conditions we came away impressed with how it handled. With that said, this is still very much a race bike, and the handling can be defined as such. The steering is responsive, and the back end feels short, which leads to a bike that responds quickly and left a few less-experienced riders on edge.

Although the bike doesn’t look the part, it could be described as an all-arounder. Out-of-the-saddle efforts were where we felt the bike was most lacking. It wasn’t the frame or power transfer; that was spot-on. It was more around the new bar system. None of our testers are what we would consider “big,” and all but one mentioned the flex they experienced out of the new cockpit. It was a deal-breaker for a few. 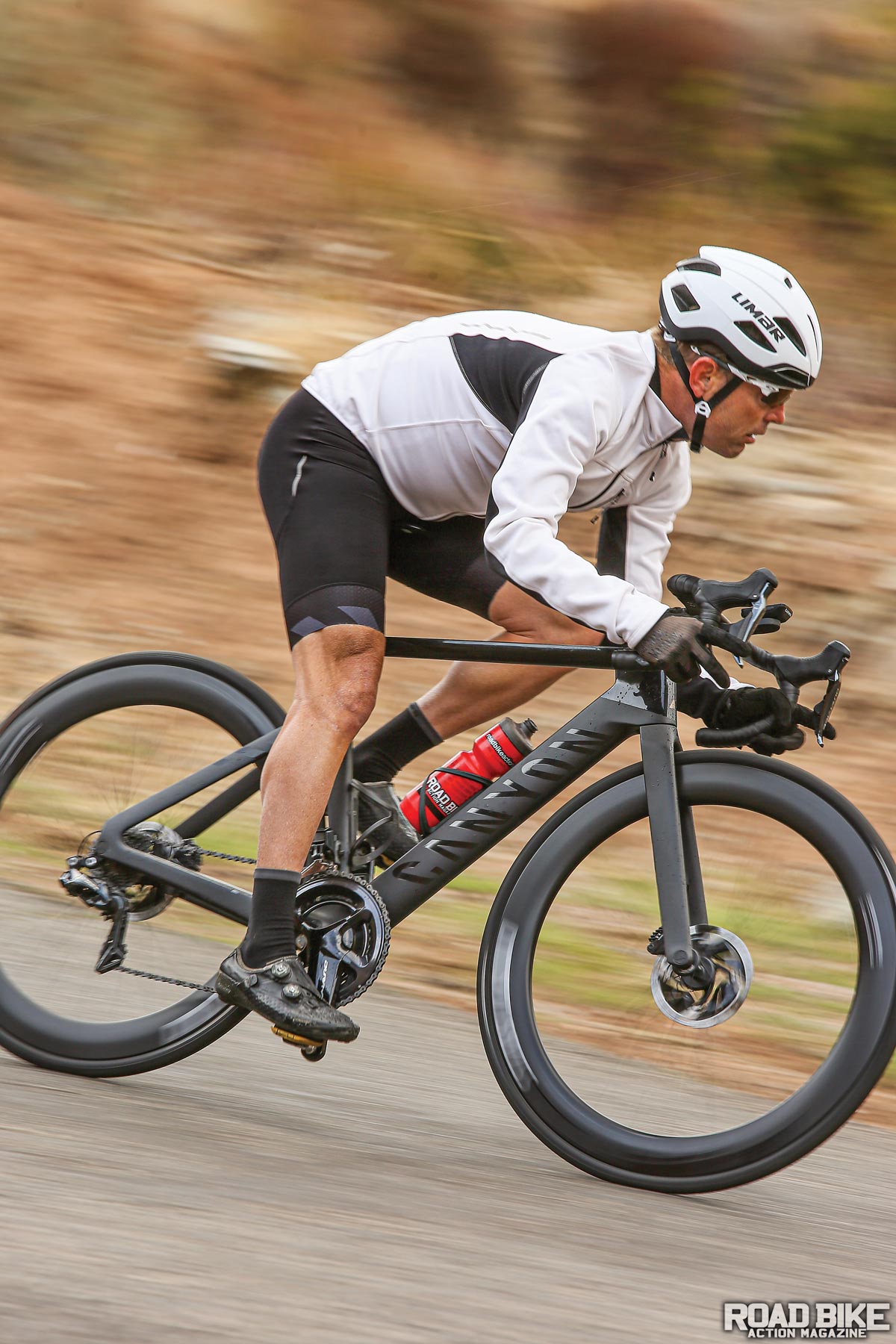 It’s almost shocking that a bike with frame tubes and wheels this deep can still hit the scales at 16 pounds. This just goes to show how much technology has evolved. This is an aero bike that we wouldn’t hesitate to call an all-arounder, but that is if you’re okay with a fairly aggressive geometry and minimal cockpit adjustment.

For some, this compromise is worth the rest of the package and price. There isn’t another bike on the market at this level that even comes close in price, and then add in a power meter. Trek, Cannondale and the rest should take notes, because this is what riders want—value and performance.

Despite all the massive upgrades, we’d say the Aeroad is 95 percent there. Just as they did with the dual-plane handlebar on the Grail gravel bike, Canyon assumed some risk with the adjustable handlebar concept. We hope they’ll offer a selection of aftermarket-compatible cockpits so a rider can better personalize the steering package to
their needs.

Regardless, the CFR has become the go-to bike for one of our speed-demon test riders. For us, the real takeaway is further validation of how a consumer-direct company can affect and infiltrate the market so drastically. But, it’s simple, they make bikes that push the limits and minimize compromise for a hard-to-beat price. ν

• Too much handlebar flex

• Look, feel and be fast