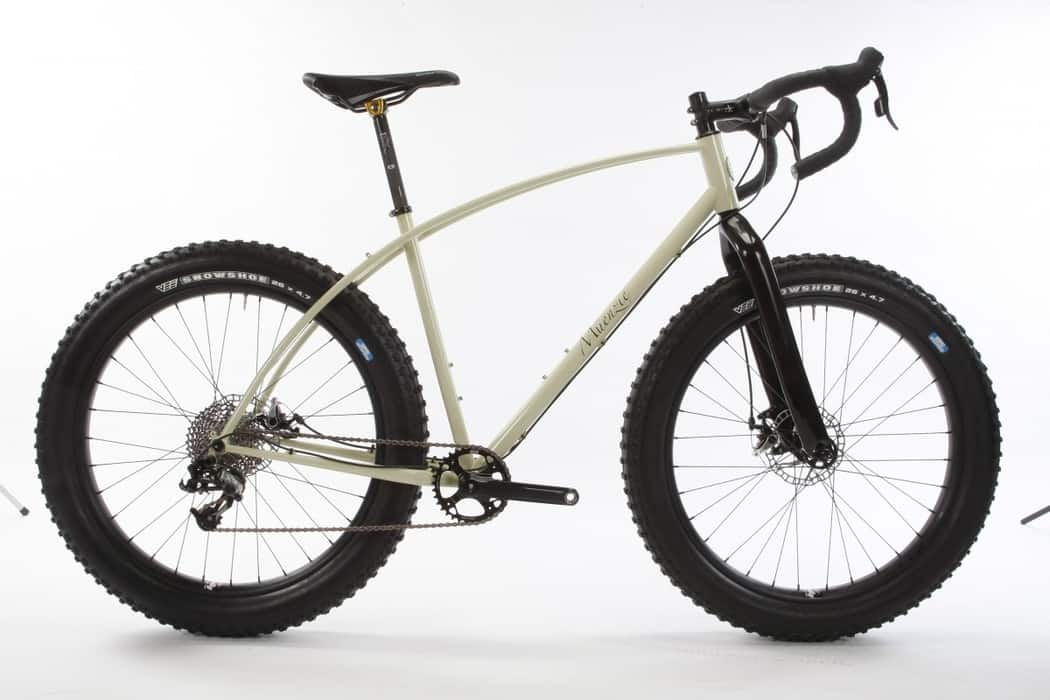 The idea ﬁrst began to jell with us on a gravel lunch ride when the group talk centered on how much better bikes with bigger, dirt-oriented, 33c tires handled on the pavement, as well as the dirt roads they were optimally designed for. When we got back to the ofﬁce we discovered that in our hour-long absence our sister zine, Mountain Bike Action, had taken delivery of another “fat bike.” As deﬁned by their massive, tractor-like fat tires, the fat bike category is currently expanding with the type of explosive growth we’d expect to see if an In-N-Out burrito franchise opened here in SoCal. 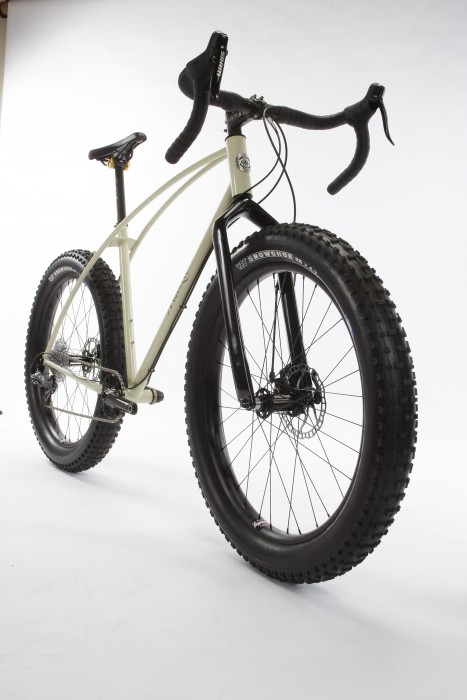 Within minutes of checking out the new fat bike, someone blurted out the obvious question, “What would a dropped-bar version of a fat bike be like to ride?” Soon enough, a call was made to John Muenzenmeyer of 616 bikes. John was an old friend from his days running the original Nukeproof bike brand, and the Grand Rapids, Michigan, builder had recently picked up the torch once again to create the 616 brand of fat bikes. When we pitched the idea of building a dropped-bar version, John jumped at the chance; it’s hard to keep a bike-obsessed torch man from doing his job!

THE BIKE
Although 616 was founded on the standard-issue double-triangle frame, John had been toying with the idea of building a new/old cruiser frame, and that’s just what he used for the basis of his ﬁrst drop-bar fat bike. The frame is made from a combination of 4130 chromoly (top tubes) and True Temper OX Platinum tubes for the downtube, seat tube and chainstays. Besides the welding, John personally hand-bends the top tubes himself. Despite the steel frame and the monster-sized wheels, the Muenzie still only weighed in at 22 pounds. The frame runs with a 71-degree head and 73-degree seat angle, with 45cm chainstays and a 105.5cm wheelbase. Painted in a soft pistachio green color, the classic cruiser design with a split top tube is graceful and fetching to say the least.

THE RIDE
In going over the bike with John, we got quite an education on all things fat. Apparently, there are currently two camps of different wheel sizes being used—26 and 29 inches. The Muenzie runs on 26-inch rims, which, with the over-sized tires, push the bike into the wheel-size realm of a 29er. The fat bikes using 29-inch rims are called 29erplus (an actual 31er) bikes and, as of now, their market growth is limited by tire choice. While many fat bikes are also now going with tubeless tires, our 26-inch-wheel bikes ran with 4.75 tires and inner tubes. The ride quality deﬁnitely depends on what air pressure you run. On the pavement, we did notice a sort of falling-over sensation when leaning the bike in for a turn.

No, the Muenzie is not intended to be the ideal, long-distance gravel bike—although we spotted a handful of fat bikes competing in the 200-mile Dirty Kanza—but depending on the local geography, for some of you, it just might qualify as the ultimate fat bike. As much as we expected the bike to prove capable in rough terrain, thanks to the high-ﬂoatation tires, we still came away surprised at how efﬁcient the bike was for riding over truly rough and rocky terrain. When we hit patches of deep sand, the bike was not as much fun to pedal. But eventually, once we realized where the bike most liked to be ridden, that’s where we tried to keep it. In short, the 616 was a blast to ride. No, maybe not the stuff for any dyed-in-the-wool roadie, but for anyone with an inkling of enthusiasm for both road and dirt riding, the Muenzie is a low-cost way to broaden your pedaling experience. 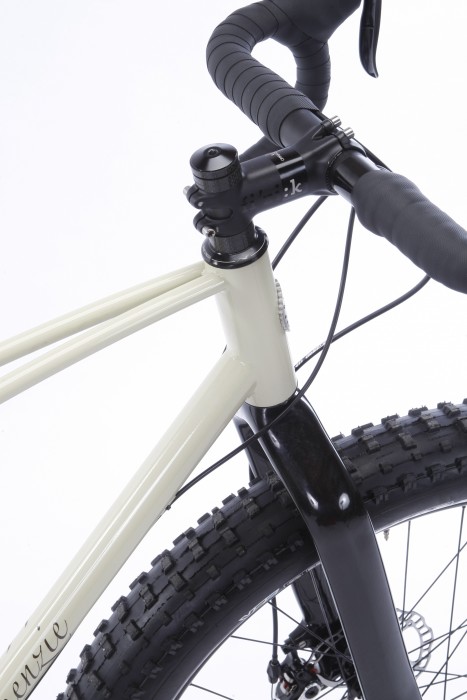 Due to the positive response he’s gotten with the Muenzie design, John has decided to maintain the Muenzie as its own line within the 616 brand. The frame will also now be available as a (single-speed) townie version and a 29-plus version, which uses a curved seat tube to make room for the rear wheel.