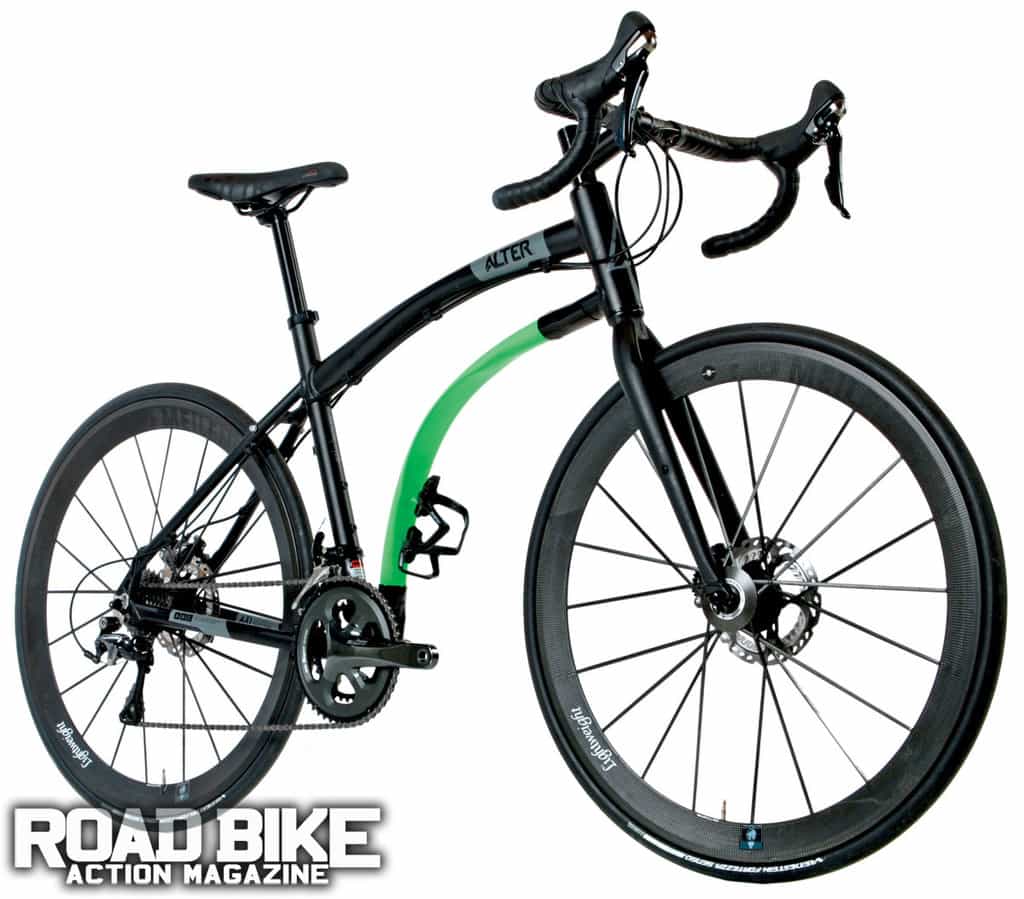 A new bend on added comfort

Let’s not kid ourselves here. At Road Bike Action, our mission is to test performance-oriented road bikes. In testing the Alter Reflex, we’re not deluding ourselves into thinking that it could be the next greatest thing in road bike design. However, we feel that another part of our job is to explore new and different technologies that could impact the market. And what we are welcome to consider with the Alter is simply the arrival of a new frame design, which could get more people cycling by making the experience less uncomfortable.

Alter Cycles is the product of Mark Groendal, who was also the mastermind behind the even crazier-looking Slingshot bike from the early ’90s. The concept for both the Slingshot and Alter is that a flexible frame is capable of storing energy to increase a rider’s speed and comfort.

We first encountered Mark and his Alter bikes at the 2015 Interbike show. Knowing that race bikes like the Specialized Roubaix, Trek Domane and Cannondale Synapse were now extolling the benefits of increased compliance, we were intrigued with the concept of the Alter. We told Mark that if he made a bike with drop bars, we would definitely take a look at it. One year later, Mark delivered.

Ever since he sold the Slingshot brand in 1994, Mark has remained committed to finding a less radical (and visually off-putting) design that embraced the same concept. Eventually, he opted for a curved downtube to act as the frame’s spring element, and in that pursuit he tested different materials for the frame and spring. The first iteration was a carbon frame that used a titanium downtube, which he says produced great results. However, to reach a larger audience with a less expensive frame, Mark decided to release an aluminum frame that used a steel spring that would best allow a variety of builds—from flat-bar fitness bikes to drop-bar road and gravel bikes.

The guiding philosophy of the Alter frame is one that runs counter to the prevailing ethos of all frame builders—that frame flex is a good thing. With their ARC (Active Frame Construction) technology, the idea behind the Alter frame is that a flexing spring not only enhances comfort and compliance but stores energy. With the Alter frame, this concept is accomplished by using a specifically designed top and downtube that “extends” from both bump and pedaling forces.

The main tubing of the Reflex is 7005 aluminum with short tube sections that extend from the head tube and bottom bracket to house the interchangeable steel downtube. The top tube has an oval shape on each end that is vertically oriented to maximize contact with the head tube and seat tube. The oval shape is altered at the center of the tube so it is oval in a horizontal axis. This allows the flex of the alloy to be focused away from the welds.

There are four different downtube “springs” available (in seven different colors) for varying degrees of flex to allow the customer to tune the amount of flex needed (by rider weight). Optional springs cost $99. Although the frame is made in Asia, Mark proudly points out that the downtube sections are manufactured in America.

In theory, the energy stored in the frame is released just as you enter the “dead zone” of a pedal stroke. What you get is compliance without energy loss. Another advantage that the design has is it not only can store pedal energy, but it stores momentum energy that would otherwise be lost energy as you encounter a bump and your forward momentum would normally be lessened or diffused by your body. While some of this is still happening on the Alter, it also is loading some of that into the spring that moments later will be returned if the rider continues pedaling.

After a few miles of a familiar loop that included some gravel roads and rough tarmac, it was clear that the Alter definitely enjoyed an increased level in compliance. Still, we had a hard time pinpointing the frame’s all-around potential as a more performance-oriented ride.

As with every test bike we get, we always first ride them as delivered. Was it the relaxed geometry? The upright position? The weight? The big tires? To find out, we made a dramatic component swap and mounted a pair of Lightweight Meilenstein C Disc wheels. The hand-built $6500 wheels only weight 1358 grams. Not unexpectedly, this change and a few other small modifications completely changed the bike’s dynamic.

Yes, we felt the same flex and rebound, but it now felt more efficient. Our only conclusion was that with the addition of the stiffer wheels and smaller tires, the frame was no longer dissipating energy; instead, it harnessed the energy into a precise location where it could be stored and reapplied as long as the rider was continually pedaling. We found the best results when we averaged a cadence of 85 or lower, because we naturally seemed to maintain tension throughout the entire pedal stroke.

The Alter Reflex is a unique design that, instead of dissipating road imperfections, vibration and frame flex, it embraces it and stores the energy like a spring. This energy is only stored for a short time—about a quarter-turn of the crank at 85 to 90 rpm. With a continuous pedal stroke, that stored energy is then unloaded from the spring against the tension on the crank, allowing it to be transferred to the forward motion of the bicycle.

As of our test, Alter is only selling two models of city bikes, both with disc brakes, but summer 2017 the Route 400 is set to be available. While we don’t expect to see a lot showing up on our group rides, marketing the bike to casual, entry-level riders makes good sense. As odd as the bike looks, it definitely lives up to its promise of providing a smoother, more comfortable ride.

Giro d’Italia to start in Israel