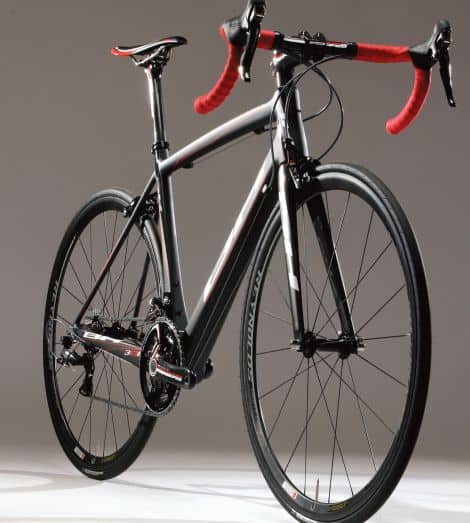 Share
Weighing just 13.6 pounds, the Ultralight is one of the lightest bikes we’ve tested, but the BH show bike gave us a clue about how much lighter the bike could get.
Remember the pitched battle fought between the big bike brands for lightweight supremacy just a few years ago? Well, for 2012, the battle lines have been redrawn, and when it comes to attaining previously unheard-of frame weights, it’s safe to say that there are some few frames on the market that are shaved down and ready for battle! This return to the weight wars is actually a two-fold byproduct of the continued evolution of carbon fiber. It has as much to do with competitive marketing between brands vying for your attention in a world of increasing carbon sameness as it does with continuing advances being made in carbon frame development.
Like every other consumer good, the bike industry is committed to touting the latest and greatest thing to convince consumers that last year’s technology is so, well, last year. But, it’s not just hype. The industry-wide engineering frenzy has resulted in bold advances in improving aerodynamics, lowering weight and increasing stiffness. The ultimate example of this is the BH Ultralight, first seen at the Sea Otter Classic in April, its frame hitting the scales at a staggeringly light 747 grams. It was big news that lasted all of one month. Soon enough, Cannondale’s new Evo came along and set the bar even lower with a claimed weight of 725 grams. (Back to the trenches!) 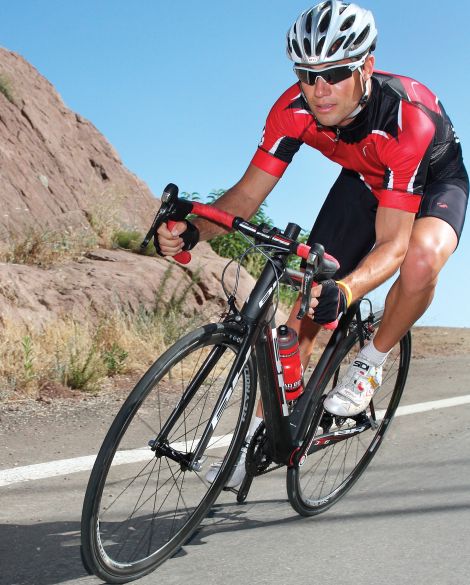 Extra attention needs to be paid when descending due to the Ultralight’s minimal weight.
THE FRAME
At first glance, the Ultralight resembles Cervelo’s R-series bikes with its pencil-thin seatstays, tall, rectangular chainstays, and square-section downtube and seat tube. The sub-750-gram weight of the Ultralight includes the derailleur hanger and (minimal) paint, which some companies leave out when hitting the scales. It was only a few years back that a 900-gram frame was on the cutting edge of weight-how quickly technology progresses.
By using a full-carbon bottom bracket shell and molded-carbon rear dropouts, the Ultralight is able to drop every non-essential gram of weight. It’s not only the frame that’s anorexic, the fork follows suit too. The 300-gram, 1 1/8- to 1 1/2-inch tapered fork has a bearing race molded into the crown, doing away with the need of a heavier steel version. 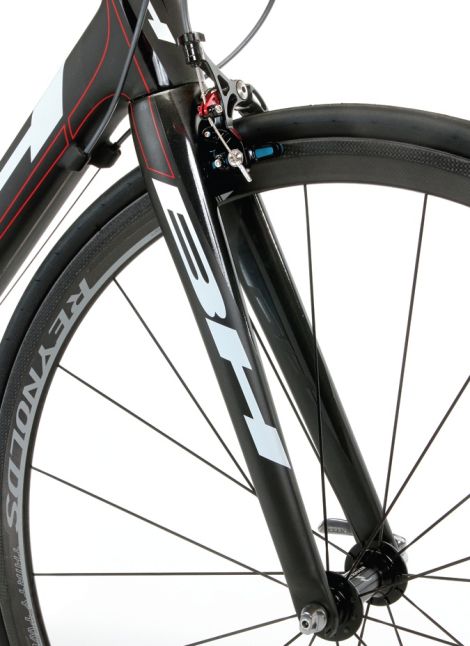 BH didn’t just put all their effort designing the Ultralight frame, they also built a 1 1/2-inch tapered fork that comes in at 300 grams.
When designing the Ultralight, BH teamed up with FSA Components and Wilier to help design a new bottom bracket system that would accomplish two things: First, optimize the stiffness and lower the weight of the frame by allowing larger-diameter, thinner tubes to be used. And second, allow compatibility with just about any crank on the market. What they came up with was the BB386EVO. By combining the 30mm spindle of the BB30 system with the 86.5mm-wide shell of the BB86, in theory, you get the BB386EVO-the best of both worlds. Using a 86.5mm shell rather than a 68mm shell allows the chainstays and seat tube to increase in size, while the downtube can increase by as much as 20mm, increasing lateral and torsional stiffness. In comparison to BH’s 890-gram G5, the Ultralight is claimed to have increased torsional rigidity by 166 percent and rear-end stiffness by 122 percent-those are some big numbers. The Ultralight’s geometry mirrors that of the G5: it has a 73-degree headtube with a laid back 72.5-degree seat tube. It has a wheelbase of 99cm, giving it a fine balance of stability and very quick handling. 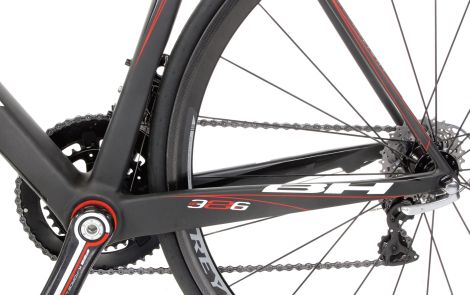 The BB386EVO was a joint venture between BH and FSA to make a bottom bracket that has all the best features out there and combine it into one system. The wide shell allows the chainstays to increase in size to add stiffness; the slender seat stays add comfort.
THE PARTS
The Ultralight will be available as a frameset, as well as Shimano Dura-Ace and SRAM Red build options, but final pricing and spec weren’t available when we completed the review. Our test model came equipped with Shimano Dura-Ace 7900 shifters and derailleurs, with FSA K-Force Light (BB386EVO) cranks. The handlebar, stem and seatpost are FSA’s carbon K-Force. Reynolds 32mm carbon clinchers keep the rotating weight to a minimum, weighing 1400 grams. As light as our test bike was, we still remember the 10.6-pound bike that the Ultralight frame contributed to that was showcased at the Sea Otter Classic.
THE RIDE
Do you want to know what’s great about riding a bike that’s lighter than what you’re used to? As long as stiffness is comparable between the two, it will undoubtedly help you climb faster. On a five-mile climb of 7-percent grade, at the same wattage, the Ultralight is going to be nearly a minute faster than a 16-pound bike. How’s that for performance enhancement? We naturally picked some of the hillier routes in the area to test our feather light BH. Since any bike can casually be ridden up a climb, we made sure to crack the throttle wide open on the Ultralight as often as we could. The result? Out-of-the-saddle accelerations had the bike propelling us forward with each pedal stroke, and its low weight could even be felt when pumping the handlebars side to side; the Ultralight epitomizes the term ‘dancing on the pedals.’
While the Ultralight was at ease on the climbs, its minimal mass didn’t necessarily lend itself to fearless descending. Paying a little extra attention on descents was necessary since it’s quicker to be thrown off its line than a bike with more mass. This isn’t a geometry or design problem; it’s merely the inevitable trade-off that the new super-lightweight bikes have to make. 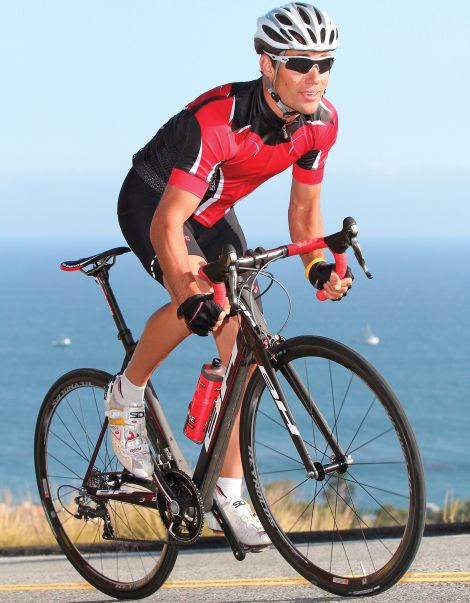 The Ultralight’s combination of a stiff bottom bracket and low weight brings a smile to your face when going uphill.
Power transfer from the Ultralight’s nucleus, the BB386EVO system, propels the bike forward when jumping hard on the pedals searching for top sprinting speeds. The oversized tubes on the bike’s lower half help keep the three main points of frame stress- headtube, bottom bracket and chainstays- laterally stiff with a feeling of being connected under power. One place the Ultralight really shined was its vertical compliance, an area where others in its category have been less than stellar. The 27.2mm-diameter seatpost helps dampen, but probably the biggest contributors are the super thin seatstays that do the job they were designed for: smoothing out the road.
THE VERDICT
The super-light bike category has a new player, and its Ultralight name says it all. Although the BH doesn’t have the same solid feel as a heavier bike when bombing down mountain passes, that’s the price you pay to be able to smash your PR on the way up. For the racer that’s looking for the extra edge in competition, or the enthusiast that just wants to have the lightest bike at the local coffee shop, the Ultralight will satisfy both. The $4300 price tag for the frame and fork puts it in the same price range as the Cervelo R5 (the R5 is $4900, but includes an FSA K-Force Light crank), while the Cannondale Evo is only available as a complete bike (starting at $5500 for a SRAM Red build).
PUNCH LINES
? A real mountain goat
? Fast descents will keep you on your toes
? One of the few frames on the market capable of being built-up at the 10-pound mark
STATS
Price: $4300 (frameset)
Weight: 13.6 pounds
Sizes: XXS, XS, S, M (tested), L, XL
Contact: BH Bikes