THE PERFECT BIKE FOR STUPID RIDES?

As simultaneously brilliant yet mean-sounding as that title treatment is, we have to admit that it was never a question posed by us, but a declarative, tongue-in-cheek assertion found in Cervelo’s own PR package to attest what the new Caledonia 5 is intended for.

Famous for their many Pro Tour racing exploits, the former Canadian brand Cervelo (recently reestablished as a NorCal based brand), has launched a new bike that attempts to speak to the serious recreational rider while still exhibiting strong racing traits. 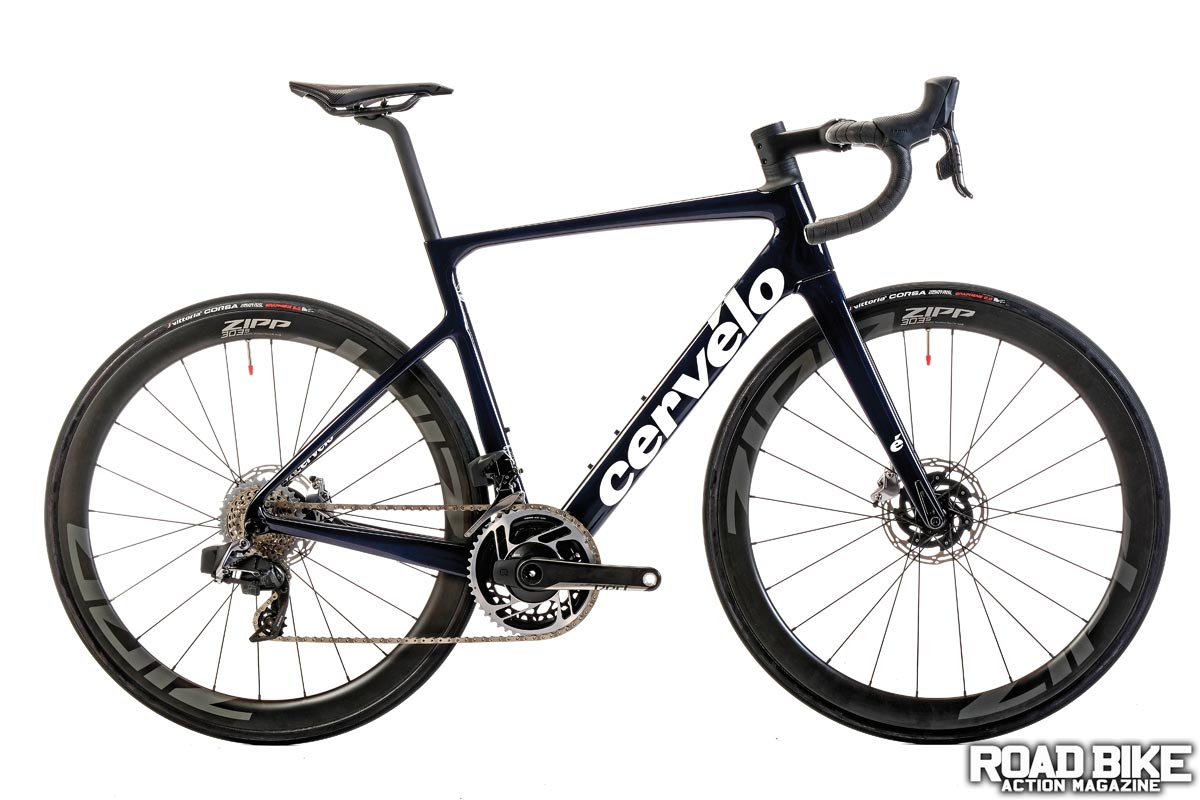 Cervelo has never been shy when it comes to maximizing tube shapes, and the Caledonia is no different.
A massive downtube and bottom bracket junction have become a Cervelo signature, and the design feature lives on with the Caledonia, which was the last bike to be designed in their former Canadian offices.

As has become all the rage, the Caledonia, too, relies on the dropped seatstay design with square, tapered chainstays and a nicely tapered top tube. It’s a small detail, but having the internal seat-binder bolt placed diagonally made for much easier tool reach and adjustment.

Although between science and style we’ve heard a handful of reasons why some frames are designed to have their thru-axle handle on opposite sides of the bike, Cervelo has chosen to do just that with the handy pull and release levers.

Always worth mentioning is when a bike brand makes the effort to expand the color palate beyond black, and the Caledonia is available in six different color schemes.

Proving Cervelo’s investment in the Caledonia platform is the fact that the bike is available in seven different spec iterations. Starting with the $5000 entry model (with Shimano Ultegra) to the $11,000 model (with Shimano Di2 Dura-Ace), with models using every other drivetrain option (sans Campagnolo) in between.

Our test bike was the second-highest spec, with a SRAM Red eTap AXS drivetrain and a CeramicSpeed bottom bracket matched with a pair of Zipp 303S wheels mounted with tubeless-ready 28mm Vittoria Corsa Graphene 2.0 tires and 160mm rotors.

Cervelo took care of the hard parts with their own carbon handlebar, stem and seatpost, which was topped off with a Prologo PAS saddle. The bike also comes with an add-on parts kit to allow for fenders.

Alluding to the famous Spring Classic (where they have proven victorious in the past), Cervelo emphasized that the Caledonia was specifically designed with a lower bottom-bracket height and increased trail and rear-center measurement to have a type of fast handling geared for Paris-Roubaix. As such, more than one rider wondered if the same emphasis on “fast handling” would be used if there were some long and fast descents on the famed cobble course because, once at speed, the Caledonia’s front end gets a little, well, fast in the hands.

Even with the now-fashionable dropped seatstays to aid in compliance, rolling with 65 psi in the tires, the Cervelo still provided a harsh ride. Not unlike our experience with the Calfee Tetra (RBA, October ’20) where an initial rough ride was altered by simply lowering the tire pressure, it didn’t take long for us to start dropping tire pressure with the Cervelo to lessen the bite felt over rough patches of pavement. 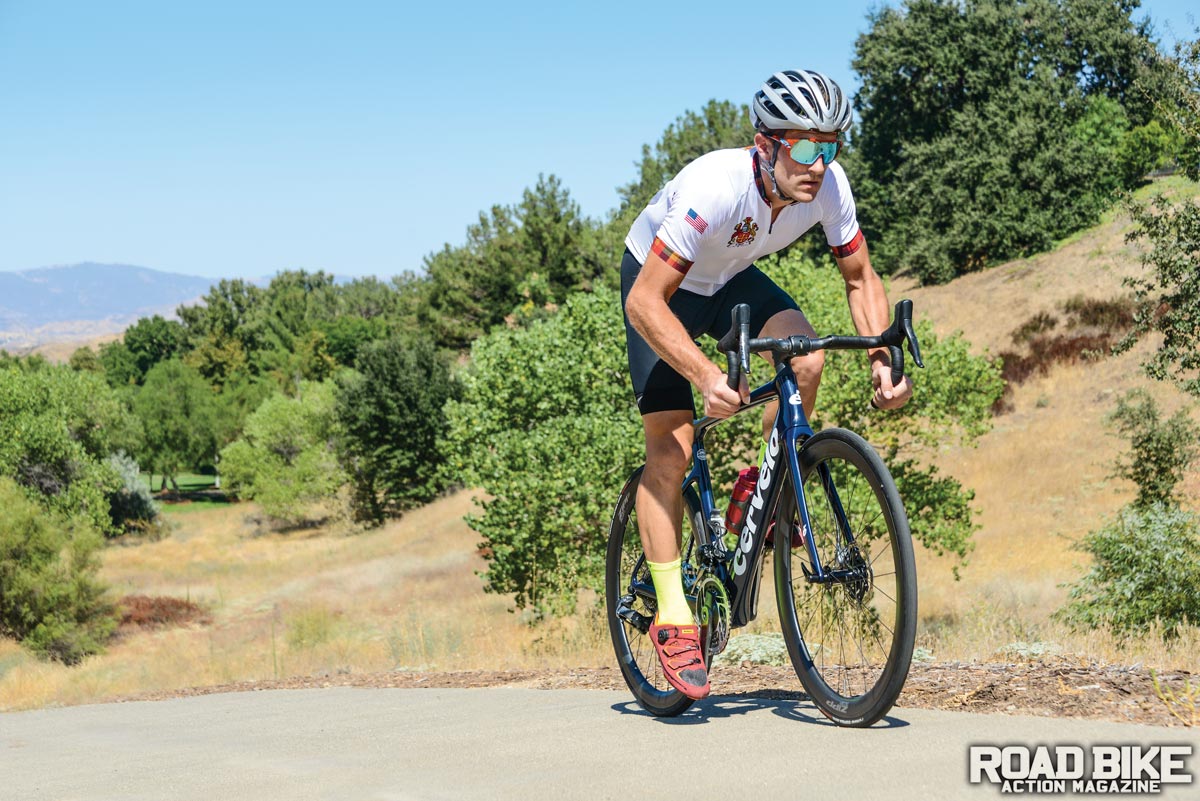 Starting at 65 psi, we dropped all the way down to (a lower-than-normal) 50 psi (with inner tubes) for about 70 miles of riding without incident, which spoke well of the Vittoria tires that, renowned for the ultra-smooth roll, have been known to be on the delicate side.

Highlighting the efficacy of running tubeless, one test rider who flicked the tubes in place of some sealant (at 60 psi) literally changed his mind on how the bike rode from just okay to great. Trust us, folks, with the latest
wheel/tire tech available, running lower tire pressures can bring appreciable benefits to a bike’s performance and ride quality. 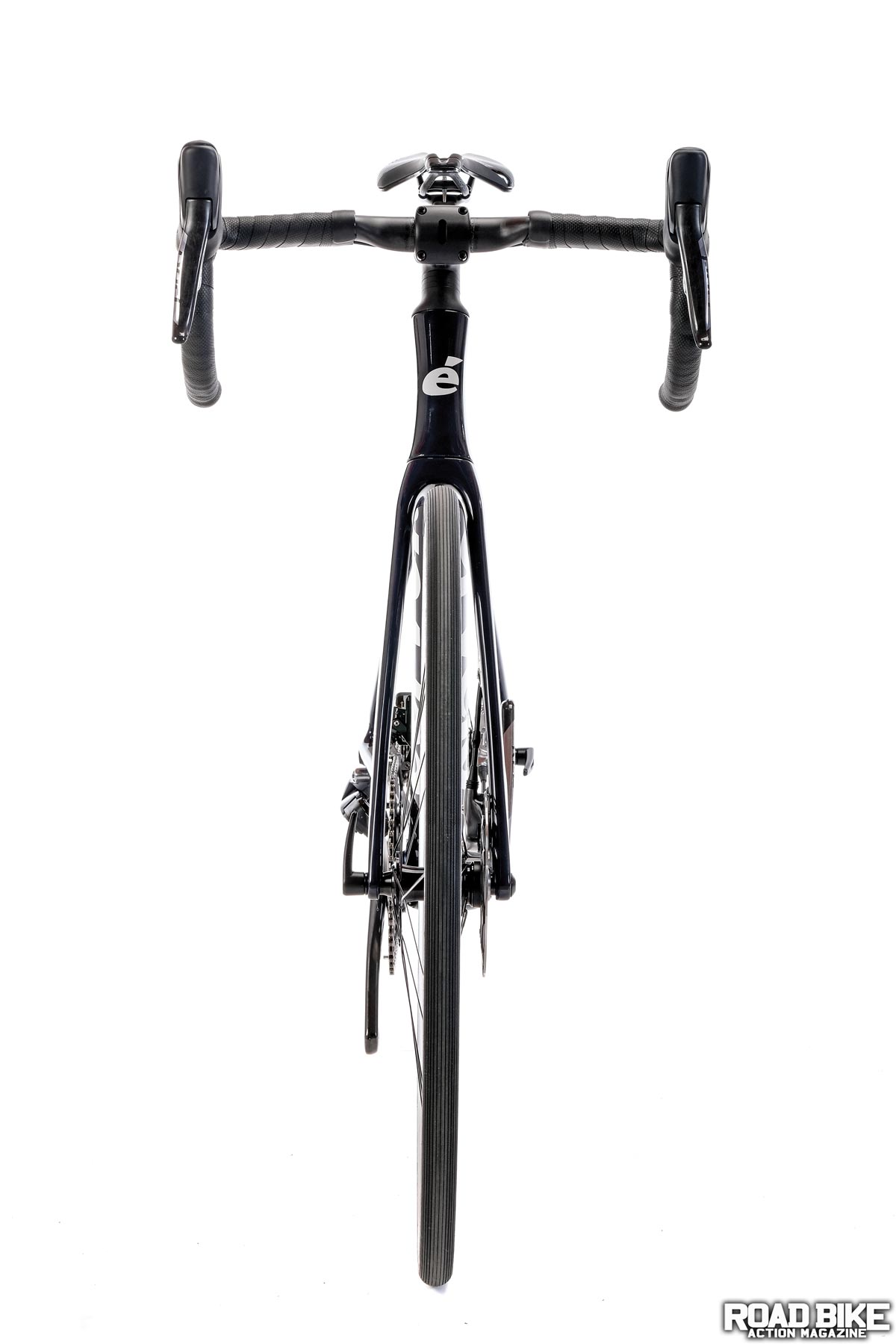 Everyone who threw a leg over the Caledonia was disappointed to learn that for spending 10 large on the bike, they’d be left rolling on Zipp’s $1300 entry-level hoops and not their higher-end Firecrest wheels. What’s with the $10,000 asking price if not to include better wheels?!

Given the importance wheels can have on overall performance, the more race-oriented riders determined that the better buy would be the $7000 version with the just-as-good-working SRAM Force eTap AXS drivetrain so as to provide leftover cash for a more desirable wheel upgrade.

In addition to the aero-enhanced six-bike Caledonia family, Cervelo also has a three-model entry-level version that runs a round handlebar and seatpost starting at $2900.