The only handmade bike still made at the Colnago factory 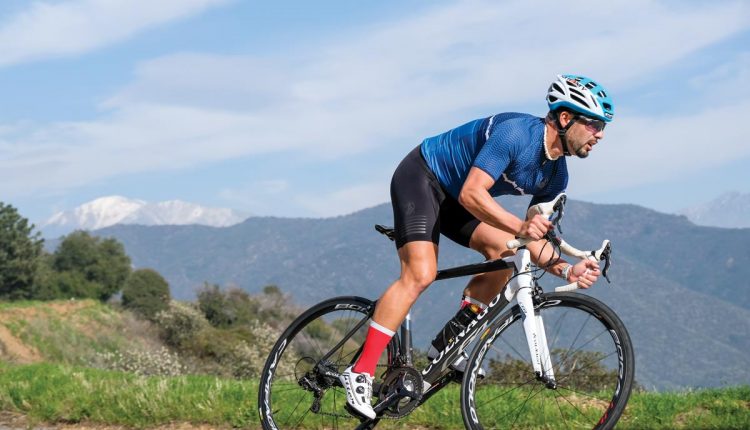 A MAN, A MACHINE, A LEGACY

Writing an intro for a Colnago bike test is easy but hard at the same time. For most road geeks, there is no need to go into the whole who, what and where that makes up the Colnago legacy. But still, we know there are plenty of others who see the name and wonder, “What the heck is a Colnago?”

Since our goal is to be as inclusive as possible in what we do, those of you road geeks who may be rolling your eyes right now can just jump ahead to the test. For the rest of you, here’s a brief explanation of what we’re talking about here. 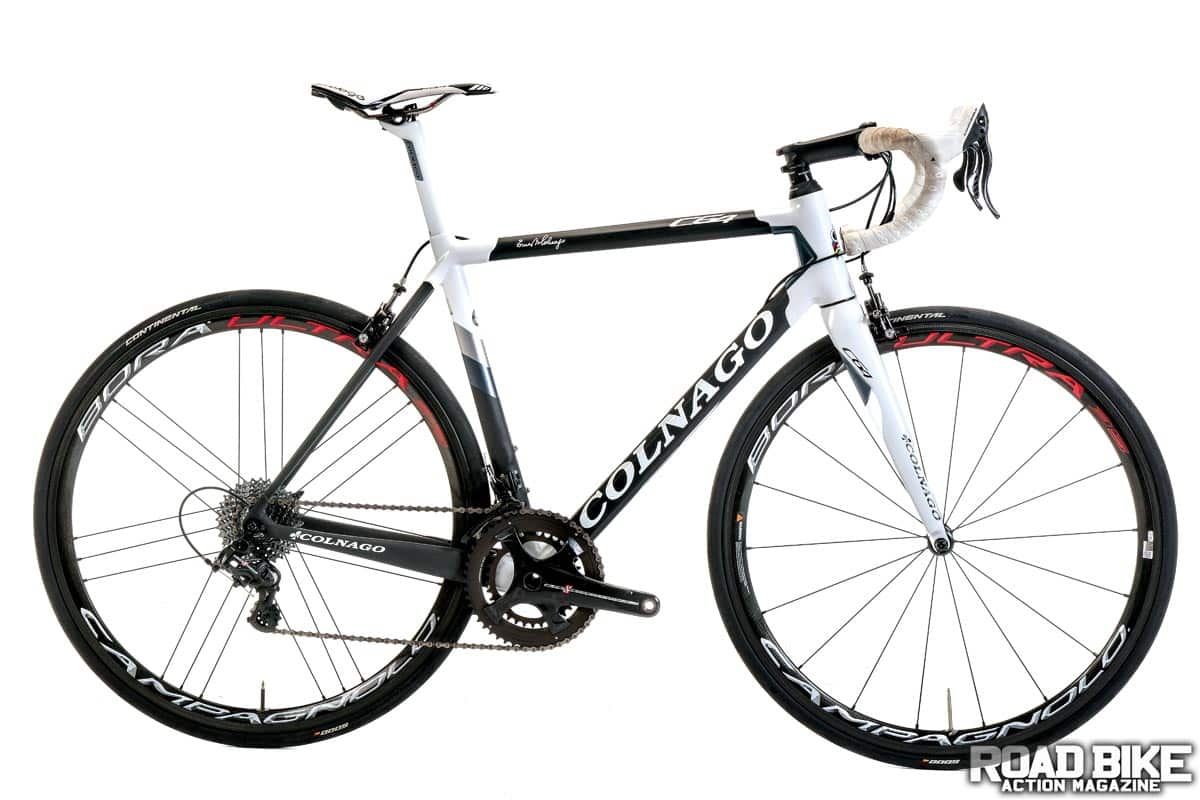 As of 2019, there are only two people alive who represent sheer royalty in the sport: Eddy Merckx and Ernesto Colnago. In the annals of race history, Eddy remains the greatest racer ever. And way back in the day, he had a mechanic who not only worked on his bikes but also built his frames. That man’s name is Ernesto Colnago.

Over the years the Colnago brand has only gained in prestige as the brand has remained under the close direction of the old man himself. Beyond that, there’s not much more we can say, because it’s all about the bike.

As with all the C-series bikes, every C64 is hand-built in the confines of the small frame shop that resides underneath Ernesto Colnago’s home in Cambiago, Italy. Like a prized puzzle, each tube and lug is hand-bonded and -assembled. For the C64, Colnago’s aim was to make the bike stiffer and lighter than its C60 predecessor. The 3K carbon-weave tubes of old have been dropped in favor of unidirectional tubes that are lighter.

In addition to the new, lighter head lug and one-piece chainstay and all-carbon dropout, the biggest change is the one-piece seat lug/tube. The chainstays are also asymmetrical, with the left side significantly larger.

There is a new seatpost that is D-shaped, and to go along with this new shape is an internal wedge to hold it in place. This is accessed from under the top tube for a clean and hidden design. The Thread-Fit 82.5 bottom bracket is carried over from the C60 and allows for a wide variety of crank fitment.

Cables are run internally, and the downtube has a recessed bottle-mount area that adds additional rigidity along the tube in addition to its already shaped design. The fork has a new recessed area at the rear of each leg just under the crown to allow compliance, as well as add lateral stiffness. The fork and rear seatstays are drilled for direct-mount caliper brakes, allowing for up to 28mm tires.

Colnago offers the C64 in nine sloping (regular) and five high geometries, as well as a custom option. Our test bike is a size 52s (sloping) that has a frame reach of 38.4cm and a stack of 56.5cm. The top tube is 53.8cm, with a virtual top tube of 55cm. The head tube is 15.8cm long at 71.92 degrees. The head tube is where the major difference is between the sloping and high geometry, with the high being between 15–20mm higher depending on the size. With a 99.5cm wheelbase, this race bike is on the long side.

Our test bike is equipped with none other than Campagnolo’s Super Record 11. Direct-mount calipers and mechanical derailleurs are all controlled by the sculpted Double Bend controls. There is a 50/34t crank matched to an 11-32 cassette, allowing us to keep the cadence high even on the steepest of climbs.

Atop the new seatpost is a Prologo Zero II Tirox saddle that all the testers seemed to be a fan of. A Deda Superzero 110mm stem holds a set of Deda Superleggera carbon handlebar in place. Colnago delivered our test bike with Campagnolo Bora Ultra 35 tubular wheels, but we swapped them out for a set of Bora clinchers that we keep in the office just for such an occasion. Tubeless beats tubulars any day! 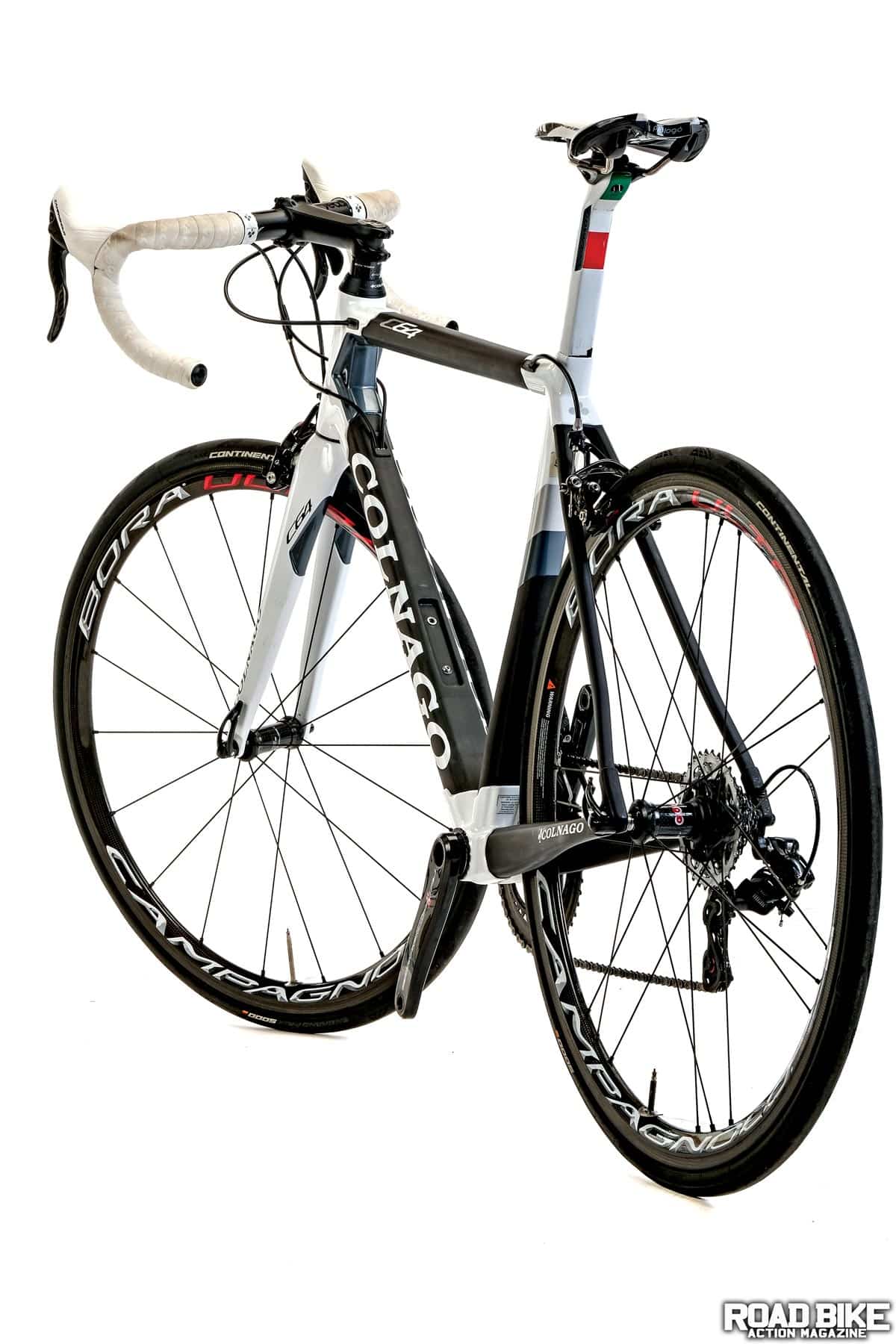 The C64 is a head-turner for anyone that is a true road fanatic, even with our subtle white, silver and raw finish. The bold graphic is iconic, and the painted carbon lugs perfectly contrast the raw tubes. As expected, the ride quality is very race-oriented with a stiff bottom bracket matched to the asymmetric chainstays and large downtube. This combination drives the energy to the rear wheel. The fork on our rim brake version is stiff, and even with the recessed compliance shaping offers plenty of road feedback.

The handling is responsive and at speed demands the rider’s attention and confidence. This is not overwhelming but definitely requires attentiveness and focus. The rear end is stiff, and even with the new D-shaped seatpost there is little forgiveness or flex. This is left to the seatstays that taper and change shape as they mate to the dropout lug.

When it comes to climbing, this bike is an absolute rocket ship, and the power transfer and low weight offer up a veritable boost of power. Ascents feel natural and are where the bike truly shines. As always, the shifting was spot-on with Campy, thanks to their independent controls. The Campy rim brakes on the carbon wheels were also one of the best we have tested, but we still wish we could have gotten the disc version of the C64.

When it’s all said and done, the C64 is an iconic bike representing Ernesto’s 64 years of dedicated and tireless innovation. The attention to detail is among the best in the frame industry. Although our test bike ran with rim brakes, we’re told that 70 percent of the C64s sold are with disc brakes. They also noted that the majority of people still choose the sloping geometry, but each year the number of high frame sales grows.

With 14 stock sizes, as well as full custom, there is one that will fit nearly everyone with little compromise. At more than $6000 for a frameset, you are getting a piece of cycling history. For most of us it’s only a dream, but there is no doubt that this is a thoroughbred Italian race bike.

• Can a racer afford it?