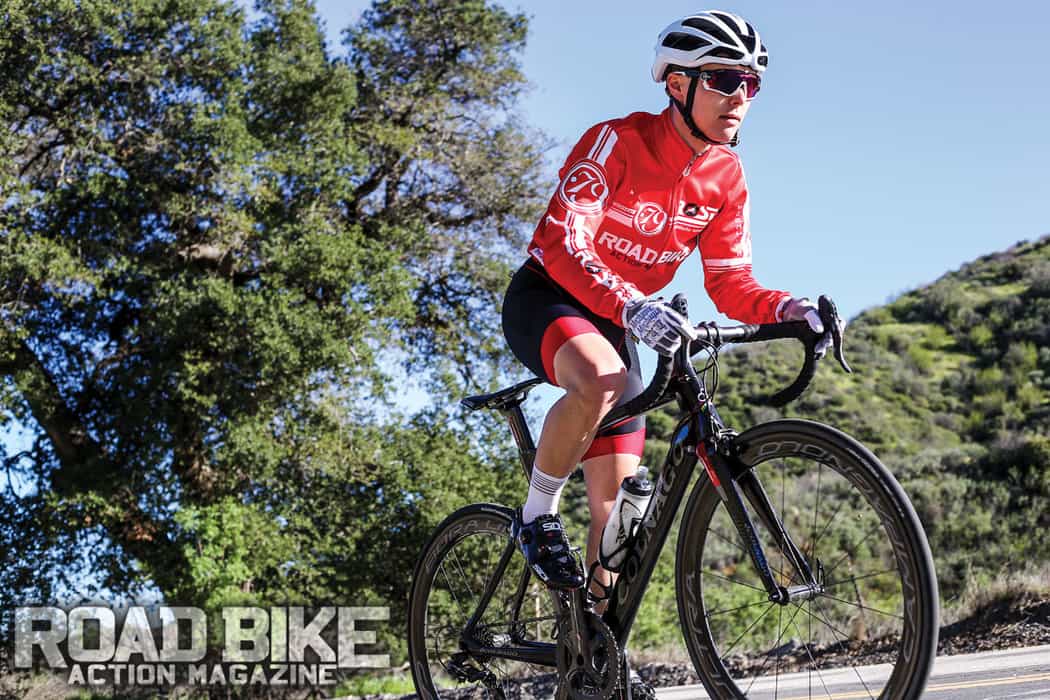 Launched at the 2016 Eurobike show in Germany, the Colnago Concept introduced a new race machine in the aero category for the Italian bicycle brand. This is their first true aero road frame. The “Concept” is actually the second time the brand has used this name, the first being in 1986 when Colnago partnered with Ferrari Engineering to produce one of the first all-carbon frames. Though that Concept was never produced, their new aero Concept has caught up with the times in offering a great aero road/race frame for consumers.

Surprising (if you don’t know the Colnago legacy) and not surprising (if you do), it was nonetheless impressive to find that each Concept frame size has a different front and rear triangle design to make up for the most in aerodynamics depending on that size. In a world best typified by small, medium and large sizes, this level of detail is indeed rare but normal for a frame designer like Ernesto Colnago, who thinks so particularly about every frame nuance. Each frame is truly different in geometry spec. The fork’s steerer uses a special lamination process to reduce added transfer of vibration to help with that goal of ride comfort as well.

Colnago chose to go with frame-specific integrated brake calipers, which use a two-bolt direct-mount caliper for the front and rear. To damp vibration, Colnago uses replaceable upper and lower headset cups that are a mix of short carbon fiber polymer blended with elastomer.

The downtube is very wide on top to help airflow pass around your water bottle. Also on top of the downtube are three cage mounts to give you the option to run your bottle on the higher or lower end. The Concept frame, with a claimed weight of 995 grams, is made in Taiwan, with the final paint being applied at Colnago headquarters in Cambiago, Italy.

With a lot of current aero road bicycles on the market that come with an integrated bar/stem system to maximize drag reduction, Colnago chose to go with a standard bar and stem, resulting in an easier and more user-friendly way to personalize the parts. We like that the rear brake is located on top of the seatstay versus the less-appealing (in both performance and maintenance) under-the-chainstay position that’s popular for its aero benefit. Sure, the bike may lose some wattage in the aero department, but we appreciate the proper braking power over any aero advantage in this department.

The drivetrain is compliments of none other than Campagnolo, with the Super Record name bringing an air of Italian royalty to the ride. Campagnolo shifters are unlike their Asian-made counterparts, with a dual-lever trigger system with one inside the brake lever and the other mounted inboard on the brake hoods. The hoods have a comfortable feel to them, with all the shifts coming quick and efficiently. We liked the Campy Bora carbon clincher wheels, which had a very responsive feel to them once they were up and moving.

When it comes to aero bikes, the Colnago Concept was a breath of fresh air. Ever since aero came on the market, there seems to be a wide range of bike builds, which create stiff and heavy, rides. Right off the bat we noticed that the Concept doesn’t have an integrated front cockpit system, which meant we could adjust the stack height, rotate the bars and even change out the bar or stem if needed (we didn’t). For an aero frame, it didn’t have too tall of a top tube, which gave it the feeling of being a more effective 54cm frame.

The frame was stiff, but not to the point of being uncomfortable. Though it rode very well on the flats once up to speed, the bike handled very well descending corners. Racing down a descent where you can still pedal, we felt a great response when we were in the drops attacking out of corners. When required, the bike pivoted well at high speeds.

Like many true aero frames, it wasn’t the best ride going up climbs. If the climb wasn’t below 5-percent grade, it rode smooth, as you could keep up speeds. But once you got steeper, the bike felt more as if you were carrying it. Jumping out of the saddle it didn’t dance too well as it preferred to stay in a straighter line. This is an aero frame, though, so not having the best climbing ability out of it is to be expected.

Overall, we really enjoyed the ride and feel of the Colnago Concept. Although Colnago may have been a bit late to the aero party, they put a typically impressive effort forward to deliver an aero bike that didn’t get caught up in a lot of common marketing tactics that you see with other aero bicycles. It rode very smooth and has the option to swap out key parts on the bike to make it fit you like a bicycle should. Again, being able to ride an aero frame with proper rear braking is a very big win for us.

Smooth handling for an aero frame