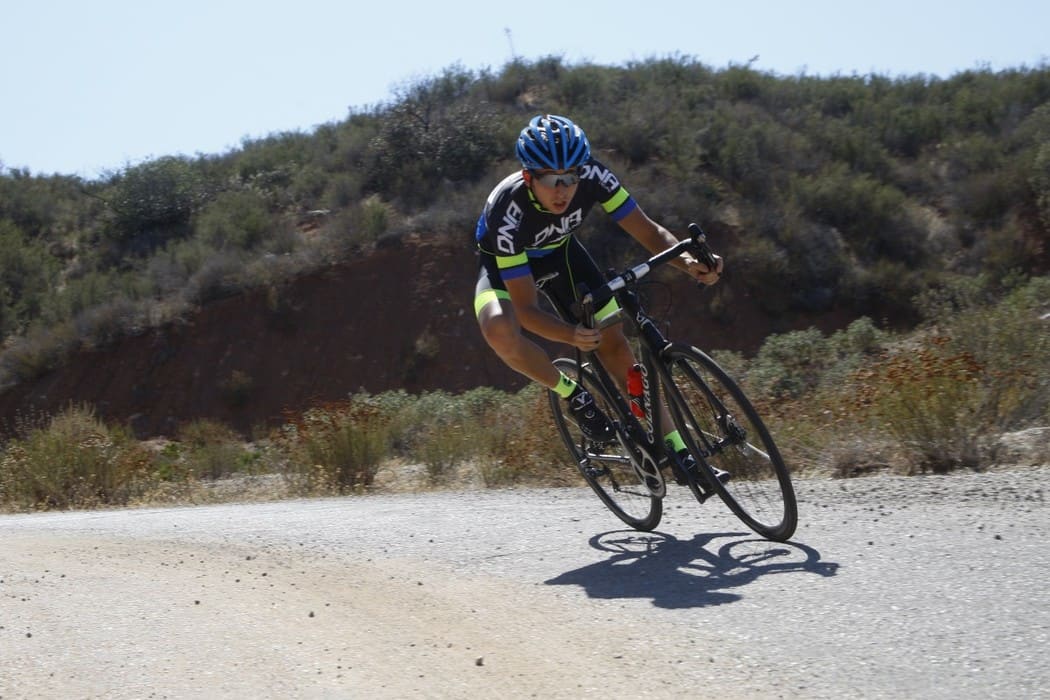 For as long as cars and bikes have shared the roads, they have “enjoyed” a contentious relationship to say the least. For most of us, cars are a necessity for our off-bike transportation needs. Equally so, cars remain our biggest nemesis when it comes to our safety and well-being in trafﬁc. Cars—can’t live with them and we can’t live without them.

Despite all that, the bike industry has come to rely on the car industry, not only for team sponsorship dollars but, increasingly of late, design and technical assistance for the modern-age race bikes. Pinarello touted their relationship with Jaguar to develop their Tour de France-winning F8. Specialized has relied on British F1 squad McLaren to help develop their Venge from the very beginning.

Of course, just as you would—or could—expect from Ernesto Colnago, the Italian bike maestro was way ahead of the game in forging a relationship with an exotic car brand. And it wasn’t with just any car company; it was with iconic automotive brand Ferrari, and the initial result (back in 1989!) was the futuristic C35 that used a carbon frame with hydraulic brakes and an internal gearbox. 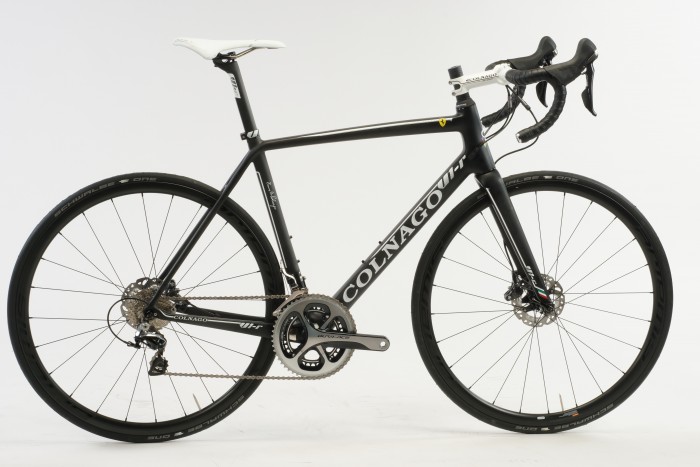 Fast-forward over two decades later and the Colnago/Ferrari relationship carries on with the development of their V1-r, where the world-renowned car-maker helped Colnago develop the carbon lay-up schedule and tube design to maximize the frame’s weight-to-aero balance. Each of these new V1-r frames are tagged with Ferrari’s prancing stallion logo to remind riders of the thought and technology that was put into the frames.

THE FRAME
With 60 years of designing and building world-class frames in every known material (well, except bamboo), Colnago has also spent many hours thinking about how their frames are manufactured. Despite their lugged tradition with their C-series frames, the V1-r relies on monocoque construction and, according to Colnago, is “the greatest monocoque frame produced in the history of the company.”

The ﬁrst thing you notice with the V1-r are the truncated aero-tube shapes used for the downtube, seatpost, seat tube, seatstays, head tube and more mildly on the fork. Colnago’s idea here is that the truncated proﬁles would suit all riders in any wind situation, whether dealing with fast, full-on headwinds or battling gnarly crosswinds up the side of a mountain. 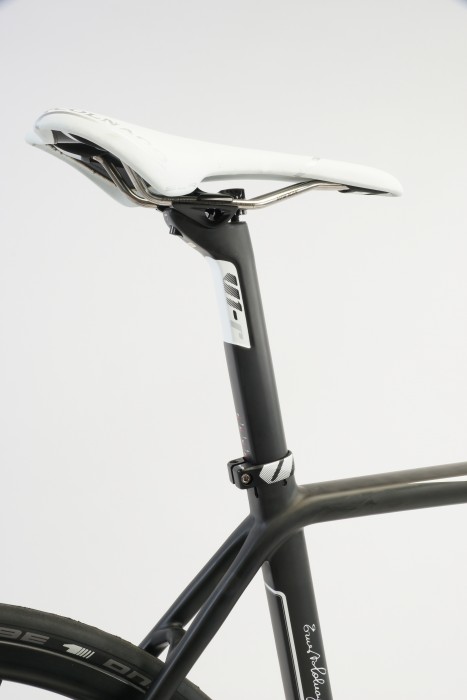 While the ﬂattened trailing edge of the tubes does provide the V1-r with an aerodynamic advantage, it also helps to stiffen up the rest of the frame. Also, by cutting off the tail of the traditional aero-foil shape, Colnago was able to decrease the weight by losing the extra carbon needed for the tail. Colnago took their stiffness goals even further and developed a proprietary removable Press-Fit bottom bracket shell system called Threadﬁt 82.5. The two side cups thread into a middle shell that can all be replaced if damaged or worn out, then a Press-Fit system would press into the Threadﬁt 82.5 shells. This creates a large and solid bottom bracket platform with minimal play in the bottom bracket shell to reduce the chance of creaking with any bottom bracket system.

THE PARTS
Despite Colnago’s warranted pride in their Italian roots, it would have been impossible to spec a Campagnolo drivetrain on our test bike since the grand Italian component-maker does not (yet) market a disc brake (Colnago does make a V1-r frame with traditional caliper brakes). To that end, our V1-r was built with a Shimano drivetrain that included a set of their superb hydraulic disc brakes. The wheels on the V1-r are a set of Colnago’s house-branded Artemis disc wheels with Shimano’s Ice-Tech rotors attached and wrapped in 23mm Schwalbe One racing tires. To match the V1-r’s tubing shape, the seatpost is a proprietary design that follows the same truncated aero-tube shape as the rest of the frame. Like so many others, Colnago recognizes the deﬂection properties of a 27.2mm seatpost, so the smaller-size seatpost is used, just without the circular shape.

One tech innovation that Colnago brought to the V1-r was the front 15mm thru-axle system designed by Mantiou called Hex-Lock. On a scale from 1 to 10—10 being difﬁcult—the Hex-Lock’s user-friendliness initially rated a solid 8, especially when compared to the easy-breezy design by DT Swiss. 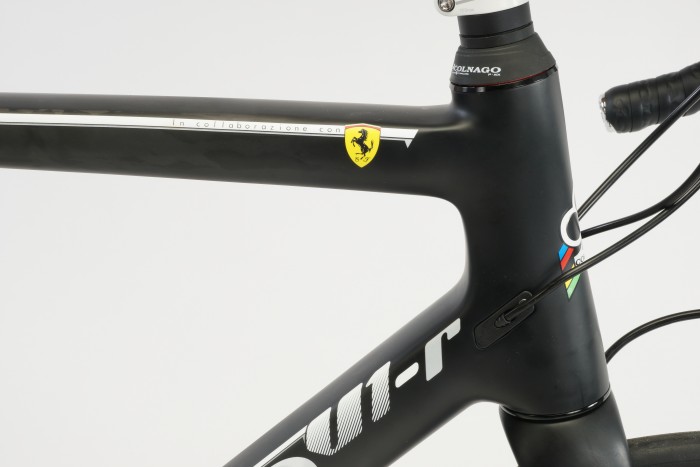 THE RIDE
When the V1-r ﬁrst arrived at the RBA ofﬁce, there was a split in opinion on just what the bike was intended for: Cyclocross? Gravel? Adventure? Racing? There was the 175mm-tall head tube—a deﬁnite endurance friendly spec. Rear-wheel clearance was deﬁnitely too tight to qualify as a gravel bike. Once we dug a bit deeper and looked over our notes from last year’s soft launch of the bike (RBA, November ’14), we conﬁrmed that the V1-r was indeed intended to be a race-inspired, performance-oriented road bike.

As far as the disc brakes were concerned, even though they are currently still illegal in UCI races, everyone knows that they are being ofﬁcially being considered; does the V1-r represent another example of Ernesto Colnago’s forward-thinking?

On our ﬁrst (ﬂat) lunch ride, the Colnago proved comfortable in terms of both compliance and (upright) positioning. The frame’s stiffness was way beyond what we were expecting given the amount of vertical compliance. Powerful efforts proved equally enjoyable with minimal loss of energy, but more often than not we were wishing we could have gotten to a lower front-end position.

Since we could not get into an extra-low position while descending, it threw off the center of gravity and made leaning into fast corners a tad difﬁcult. Additionally, Colnago had implied that this was a great frame to ﬁght off crosswinds due to the truncated airfoil tube shapes, and they were right. Flying down straight descents with harsh crosswinds was nothing to get spooked about. 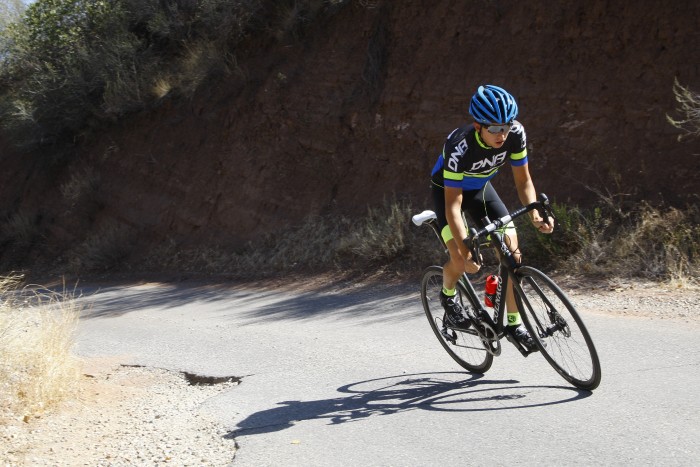 VERDICT
Colnago, of course, has a storied tradition, which should automatically ﬁnd a special place in the hearts and minds of all cyclists. When you get past the history and get to the now, they remain front-runners in the high-end market. Their partnership with Ferrari has helped get the V1-r right where they wanted—light, stiff and responsive. We were surprised with the different approach to the geometry, neither for nor against it, because for some riders it’s going to be just right. At $4699 for the frame, the V1-r indeed hits the top end of the price range, but if you’re in need of a race-inspired bike without feeling like you’re kissing the front wheel, the V1-r should be a contender.

Check out colnago.com for more of their historic brand