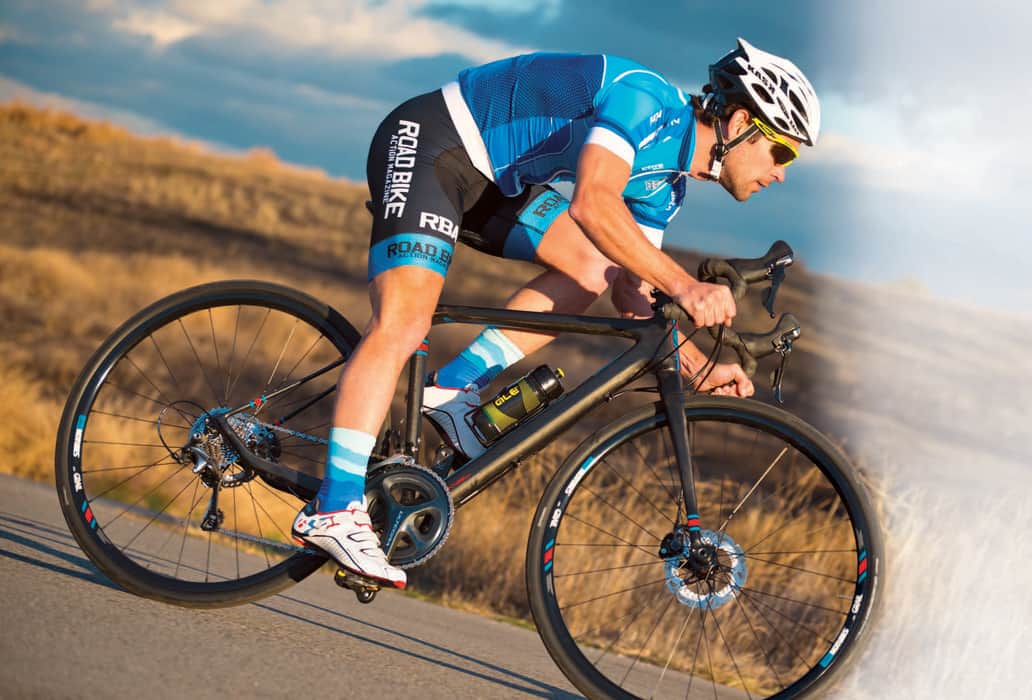 Few bike brands enjoy such a unique, storied history as GT Bicycles, a company who was once on top of the mountain bike world while simultaneously showcasing its road bikes in the pro peloton. And while recent years have seen GT struggle to find a place within the drop-bar community, it was in 2014 when the company drew a hard line in the sandbox that is the bike marketplace when it unveiled the Grade.

Part of GT’s EnduRoad line that’s akin to the gravel and all-road designations we’ve seen emerge, the Grade was designed to handle any and all terrain, and do so with both comfort and performance. We reviewed a pre-production version of the Grade in a previous issue, and now we’ve finally gotten our hands on a production model to put through its paces.

THE FRAME
Among the full-carbon Grade’s most noteworthy features is its relaxed geometry and long wheelbase (our size-51cm test bike sports a 101.7cm wheelbase, and head and seat angles of 69 and 74.5 degrees, respectively) designed for all-day riding in a relatively upright and laid-back position. The Grade also features GT’s signature triple-triangle frame design, with thin seatstays connecting to the top tube forward of the seat tube in an attempt to help increase vibration damping (admittedly, this design is much less pronounced on our 51cm test bike compared to some of the bigger sizes in the range). Speaking of the seatstays, they’re not hollow like those found on most other bikes, but are made using a solid, glass-fiber construction, which GT says improves compliance even more, but is also more durable for such thin tubes.

Other features include tire clearance for up to size-35mm rubber, a PressFit 30 bottom bracket, and 1 1/8- to 1 1/4- inch tapered head tube. Interestingly, though, the Grade does not have any kind of internal routing, with all of the cables run underneath the downtube. The front brake cable, likewise, is run externally down the left fork leg and held in place with a less-than-inspiring plastic clip.

THE PARTS
Our test bike was the top- of-the-line Grade offering, and it included a full-Shimano Ultegra drivetrain with a mid-compact (52/36) crankset and R685 hydraulic disc brakes with 160mm rotors. It rolled on a set of Stan’s NoTubes Grail wheels wrapped in Continental Grand Sport 28mm tires. A Fizik Aliante R7 saddle sat atop an FSA K-Force 27.2mm carbon seatpost. GT provided the aluminum stem, as well as its own unique DropTune aluminum handlebar, which features a 16-degree outward-facing flair along the drop sections. You can also get the Grade’s same carbon frameset spec’d with a Shimano 105 drivetrain for $2499.99. The Grade is also available as an aluminum model, with six builds ranging in price from $799.99 to $1699.99. The entire Grade line is disc brake-specific.

THE RIDE
During our previous test of a pre-production Grade, we encountered a noticeable amount of fork chatter during hard braking over rough (road and dirt) surfaces. Back then, GT told us that they were already working to rectify the problem by designing a new fork with a different carbon layup, which found its way to all of the current production Grades. Consider the problem solved, because the test bike featured here elicited very little in the way of fork chatter during hard braking.

And speaking of braking and descending, the Grade is very much at home when it comes to descending at speed, particularly on dirt. The Grade’s long wheelbase and slack angles give it a terrific amount of stability in general, and its overall compliance helps absorb plenty of vibrations to help the bike continue tracking smoothly through corners. On the flats and rollers, the Grade’s compliance is a welcome addition too. And the frame’s foundation— downtube, bottom bracket shell and chainstays—is quite robust, so there’s plenty of stiffness for spirited riding.

THE VERDICT
The Grade is not a race bike, instead being more at home on rougher roads, dirt paths and gravel, and as a terrific companion for long days logging lots of saddle time. The Grade also includes rack and fender mounts for commuting. So considering its intention to be an all-rounder, the Grade is a great choice, especially given the fact that there are so many builds available in both carbon and aluminum, all at prices to meet every budget.