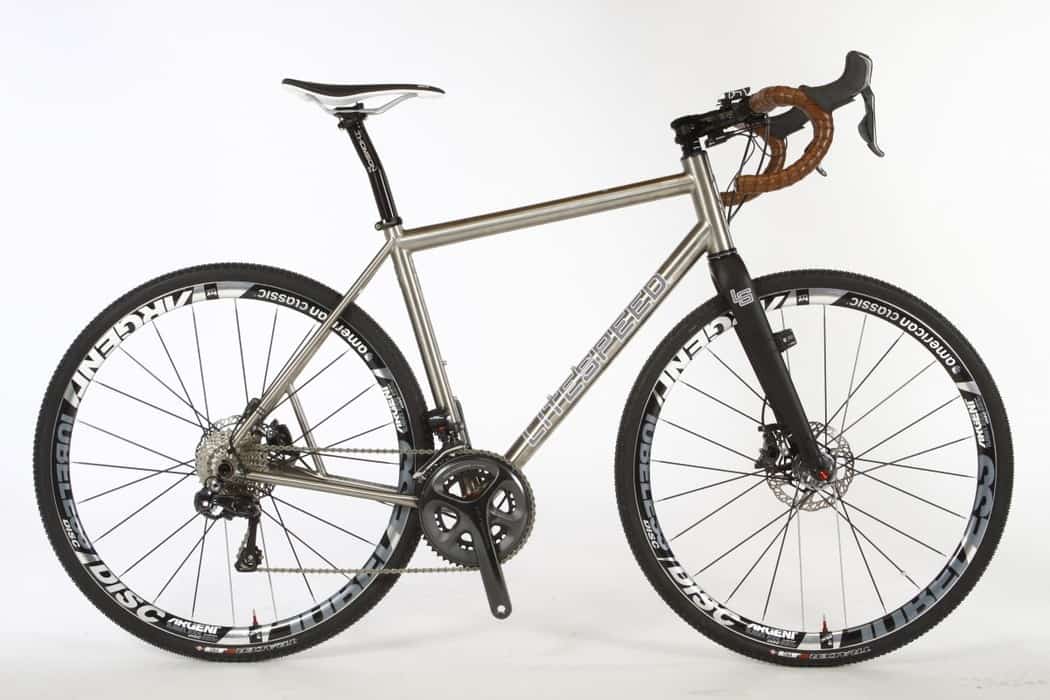 Ever since the gravel category grew from the custom workshops of the handmade builders to mainstream acceptance, there has been a rush by the big brands to add something dirt-oriented to their lines. In many cases, their new gravel or adventure bikes are simply a rebadged cyclocross or touring bike. That’s not the case with the new, U.S.-made, titanium Litespeed T5G.

THE FRAME
Instead of just putting a longer head tube on their existing cyclocross bike and slapping a different sticker on it, the T5G was developed from the ground up with what Litespeed deemed as ideal gravel geometry. “It’s a road-derivative gravel bike that falls between a road bike and ’cross bike,” said Litespeed’s Brad DeVaney. This is similar to the geometry approach Specialized took with the Diverge (page 62), and is aimed at giving the bike the handling and characteristics of a road bike, just with much greater versatility.  The frame itself uses 3Al/2.5V tubing and is constructed in Chattanooga, Tennessee, where Litespeed builds all their titanium frames. 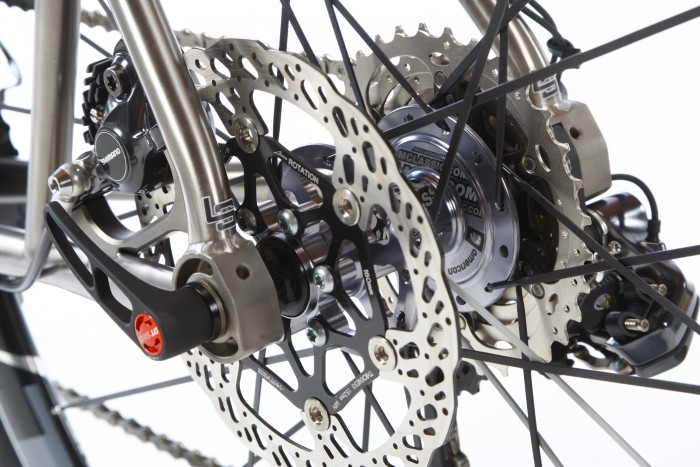 One aspect of the frame in particular that stands out is the beautifully machined rear thru-axle dropout that give it a custom look that few molded carbon bikes possess. DeVaney told us that because of the drivetrain rigidity that the rear thru-axle provides, a super-light set of seatstays are able to be used for greater vertical compliance. To help handle the braking stresses from the rear disc, an additional tube was added on the left side between the chainstay and seatstay to keep from having spongy brakes that are caused by frame ﬂex. Even though the T5G can’t match the tire clearance of what most cyclocross frames have, we were still able to easily ﬁt 38mm tires without any worry of tire rub.

THE PARTS
Litespeed sells the T5G in a few options: frame only for $2200, frame and fork for $2590, or as a complete bike with Shimano Ultegra mechanical for $4700. We went for the frame-and-fork option and put together our own build kit using Shimano’s Ultegra Di2 and R785 hydro disc brakes. For the stem, seatpost and handlebars, we used Thomson, a brand we don’t see nearly enough of on the road. The U.S.-made CNC-aluminum stem and seatpost were a great addition to the classic look of the Ti frame. As for the wheels, we went with American Classic’s aluminum Argent tubeless disc so that we could roll tube-free without worry and the fact that the hubs are dual compatible with both quick-release and thru-axle designs. 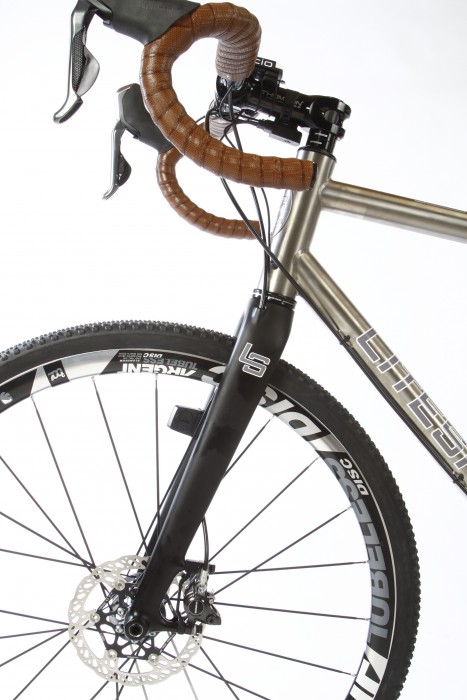 THE RIDE
We ended up spending a lot of time on the T5G over dirt roads, paved roads and in the Strada Rossa event in Redlands, and there was even a fair amount of singletrack riding to be done. Yes, a mountain bike would have been faster through the single-track sections, but because of the combination of dirt and paved roads that made up the 64-mile course, the T5G was ideally suited for the parcours. On that occasion, we were in the saddle for over four hours with plenty of rough terrain passing under our 33mm tires. Although we were beat by the end, it wasn’t necessarily from the abuse of the incessant vibrations and bumps. Overall comfort was surprisingly good for a bike that relies on tube thickness over compliance features, or even a small-diameter seatpost (it uses a 31.6mm seatpost). 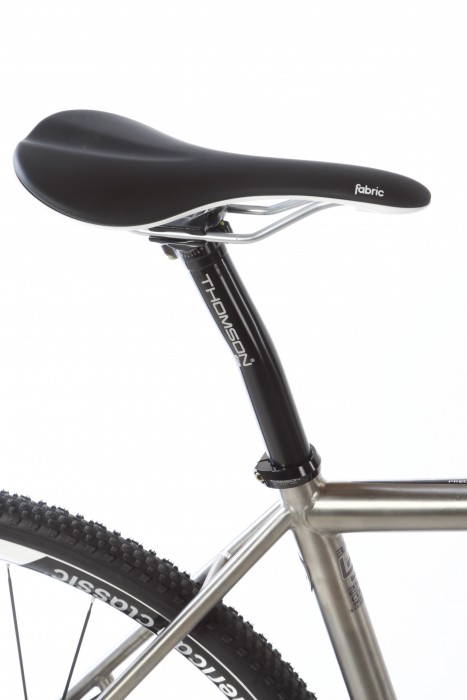 One of the testers would have preferred a slightly lower stack (the vertical distance from the bottom bracket center to the top of the head tube center) in order to achieve a position closer to his road fit, though a stem with more drop could have also provided this. Something important to mention is the higher impact resistance titanium is going to have over most carbon frames, which is especially noteworthy for a bike that’s designed to be ridden in the dirt too. The T5G is going to stand the test of time, even if that means hitting the ground in a soft corner or a rock bouncing up and dinging the downtube. 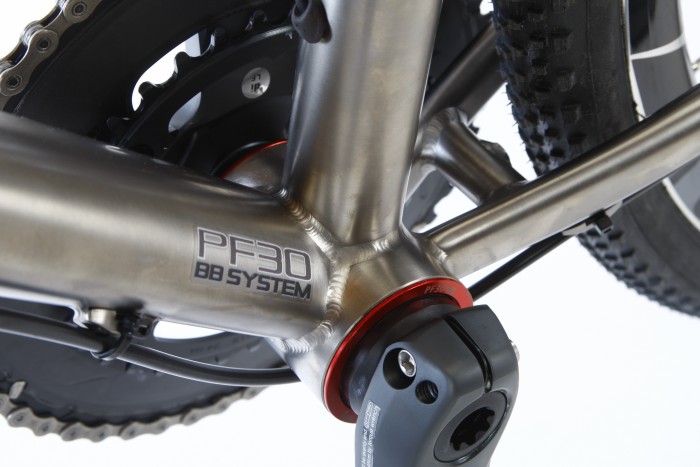 THE VERDICT
Road-inspired geometry gives the T5G a performance feel that’s designed to be much more than just a stable-cruising touring bike. It’s an endurance road bike in design, with ample tire clearance for most gravel-road conditions you could expect to face, along with the overall ride quality that helped us continue enjoying the days we could tack on a couple more hours onto the ride. At $2200 for a U.S.-made titanium frame, the price is definitely a big attraction.