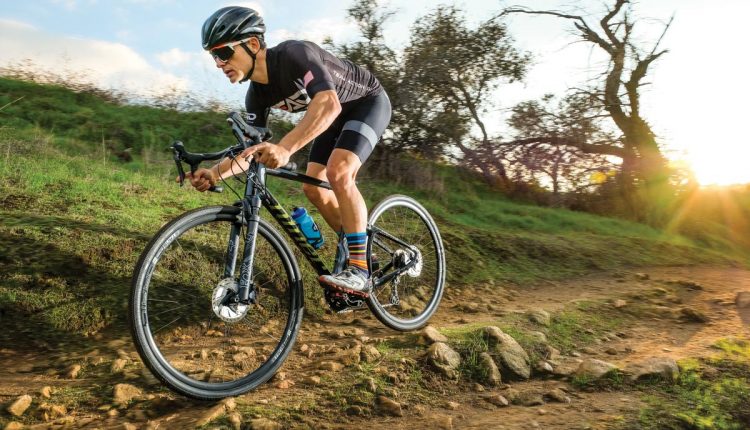 Niner’s MCR brings a new discussion to the gravel world

The Niner MCR (Magic Carpet Ride) is a bike that Niner has been teasing for a few years now. Last year we visited their Colorado headquarters to test ride a pre-production prototype (RBA, July 2019), and although the bike performed well, the route we rode had very little in common with our local gravel terrain.

The bike was officially launched shortly after and just as occurred so often back in the 90s when so many small, innovative mountain bike brands led the way with new ideas and designs, Niner will be known as the first bike brand to introduce a production run of full-suspension gravel bikes. Bravo.

All carbon MCR models share the same frame platform with 50mm of rear-wheel travel. The paint and finish quality are both creative and first-rate. The bike uses a PF30 bottom bracket shell and an oversized 1.125 x 1.5-inch head tube. This oversized head tube makes for easier adaptation of suspension forks, like the Fox AX that comes stock on all builds.

“When the climbing got steep, the 1:1 gear ratio we usually find favor with for gravel bikes felt a tad tall given the bike’s added weight.”

Niner’s CVA (Constantly Varying Arc) linkage design has been a main ingredient in their full-suspension mountain bikes for years, and for the MCR, they’ve tweaked the linkage to better respond to the high-frequency bumps of gravel riding versus the big hits of mountain biking. With the lower link under the bottom bracket, the Niner maintains a fairly short virtual chainstay at 43.7cm. With the top link connected to the frame, it leaves the center-frame triangle open for bottles and bags. The frame has eyelets everywhere for bags, bottles, fenders and more.

The MCR has internally routed cables and is Di2 compatible. All internal shift and brake routing are guided, which means no fishing for them in the frame. The wheelbase is long at 106cm with a 71.5-degree head tube angle. The frame visually seems to have a very slack/shallow seat tube angle, but because of the shock placement, it’s moved in front of the bottom bracket. The actual angle to compare with a traditional frame would be 73.5 degrees.

The stack on our size 56 frame is 597mm with a reach of 394mm and designed to pair with a short stem. Niner claims there is room for a 700x50mm tire in the rear. But this would be a tight fit up front. The frame is compatible with 1x or 2x drivetrains.

Currently, all MCR bikes are delivered with the Fox AX suspension fork with 40mm of travel. The AX fork is a modified version of their Step-Cast 32 mountain bike fork that normally has 100mm of travel. It features a three-position damper adjust with the Fox short-travel Float Evol air spring. Since the fork is a modified mountain bike fork, it uses a 15mm thru-axle and a post-mount disc brake caliper.

The heart of the build is the new Shimano GRX 800 drivetrain with mechanical derailleurs and hydraulic disc brakes. For gearing, Niner chose an Easton EA90 47/32t crank matched to a Shimano Ultegra 11-32 cassette. The front derailleur is also Ultegra, while the rear is the GRX 800 GS with a Shadow Plus retention clutch.

“Like most cyclists, we all like to push the limits a bit, and if there is one huge downside to the MCR, that’s it. The suspension allows you to push the limits of where a gravel bike can go or how fast you can go through a section, and sometimes that ends up being too fast.”

Stan’s Notubes Grail S1 wheels roll on Schwalbe G-One Evo SS tires with CenterLock 160mm rotors. A 27.2/400mm carbon Niner seatpost is topped with their custom saddle that has titanium rails. The cockpit has an Easton EA50 AX bar with a 16-degree flare that is held in place by the 80mm Niner carbon RDO stem. The handlebar is also home to the remote lockout for the X-Fusion rear shock with two settings—open or locked.

To say the MCR rides like nothing else is completely accurate. For many of our test riders, it was a feeling they had a hard time describing because even with the suspension active, the bike feels very supportive and stiff. The suspension works best when you stay seated. Out of the saddle, the rear still feels supportive, but the Fox fork almost demands you keep it locked out. To be honest, for the first few rides, we almost always had the fork locked out. We relied on its breakthrough valve to open on hard edges.

After experimenting with the air settings in the fork, it was obvious the five volume spacers didn’t offer a progressive-enough stroke for our liking. We contacted Fox, and they verified that seven was the max, so we added two more, which was a simple-enough task that only took a few minutes. After the volume spacers were added, we went back to the recommended air pressure for our weight and went from bottoming it out constantly to sitting high in the stroke where small bumps are absorbed. Bigger hits would still send us to the bottom, but with far less frequency and jarring.

At 25.5 pounds, our test bike is far from a featherweight. But once on the dirt, the weight goes largely unnoticed. The ability to stay seated and pedal through even the worst washboard or rocky bumps offers a true advantage over any other gravel-compliance system. The suspension does a great job of keeping the tires on the ground while allowing the rider to stay nearly undisturbed and producing more power. When the climbing got steep, the 1:1 gear ratio we usually find favor with for gravel bikes felt a tad tall given the bike’s added weight.

On smooth dirt roads and tarmac, we kept the suspension locked out. If you do hit a big pothole or bump the suspension will momentarily open, which highly minimizes the impact.

One of the biggest advantages of the suspension is cornering. When the dirt is off-camber in a corner or full of rain ruts, the MCR maintains traction and can track much more predictably. In fact, you can even chart your own lines knowing that the chatter bumps won’t send the tires and bike off course. We noticed that we could also size down on tires now that we weren’t relying on their pneumatic properties to damp the ride quality. 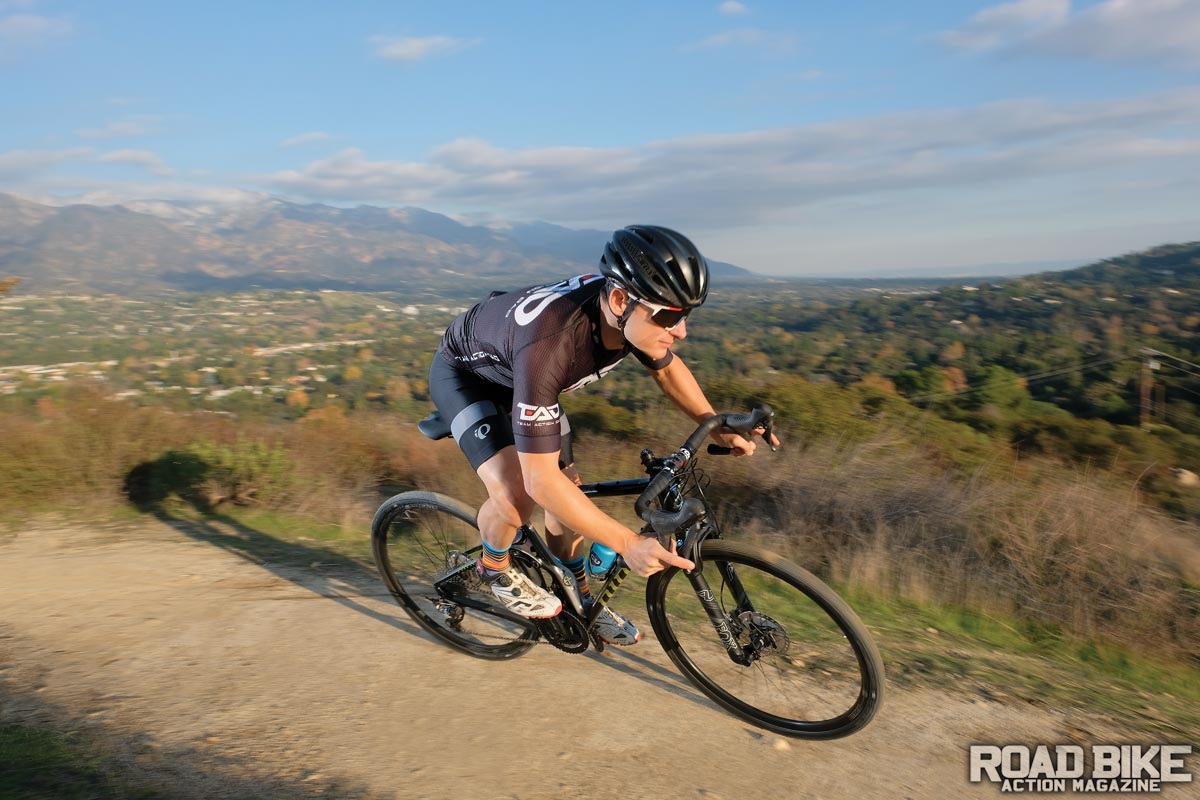 In the end, the MCR is all about comfort, contact and control with tunable and controlled suspension. This is the reason that every car and motorcycle on the road has suspension. Mountain bikers figured this out years ago, and now that we are riding dirt roads that have less-than ideal-surfaces, it’s a great option.

Without a doubt, the MCR has some drawbacks, but so does every bicycle if you look at the wide range of places it might be ridden. The MCR comes down to choosing your battles, and all our test riders had a great time on it. A few thought it was too heavy and wanted to compare their off-road downhill times to those set on a mountain bike because they were so close. Then they tried to compare the climbs to an ultra-light gravel race rig. When you flip the two, the MCR was much faster than the MTB uphill and destroyed the rigid gravel
bike descending.

On the road the MCR felt sluggish and with the heavy fork and long wheelbase it was not the bike to use for carving fast canyon turns. In the dirt, everyone had an absolute blast on the bike and sometimes that’s what it’s all about. When you’re in control and feeling confident, the experience is always good.

Like most cyclists, we all like to push the limits a bit, and if there is one huge downside to the MCR, that’s it. The suspension allows you to push the limits of where a gravel bike can go or how fast you can go through a section, and sometimes that ends up being too fast. We always seemed to reel it back in just at the ideal moment, but wow, it does inspire a level of confidence off-road that no other gravel bike can even touch.

Niner offers seven complete builds, ranging from $4700 to $8200 with the frame only (including a shock) at $3000. When we rode the bike, we were often peppered with the same question: does a gravel bike need full suspension? The answer is no different than when people asked if we needed carbon frames, disc brakes or electronic shifting; it’s not a matter of “need.”

The MCR merely represents a new level of evolutionary technology being brought to the table. It makes no bones about its adventure-seeking DNA. No, it’s not the bike we would choose for Dirty Kanza. Is it a bike for everyone? No. Is it a bike that anyone can enjoy given their own desired ride experience? Yes.

It’s not a mountain bike

As we often do here at RBA, we like to experiment and mix and match different bikes and parts to see what we can create. After a few test rides with the Fox fork, we decided to swap it with a Lauf Grit suspension.  The Lauf has 30mm of travel. No, it doesn’t have any lockout or adjustment, but we wondered if its level of progression through the travel would pair well with the rear suspension.

The Lauf feels much more supportive than the Fox AX. Although it’s over 1 pound lighter than the AX, it is undamped. This is a problem when things get chunky and rough for a long period of time. However, since this is gravel and not mountain biking, that’s rarely an issue. While the Fox fork handles cornering better than the Lauf, both are significantly better than any rigid fork. 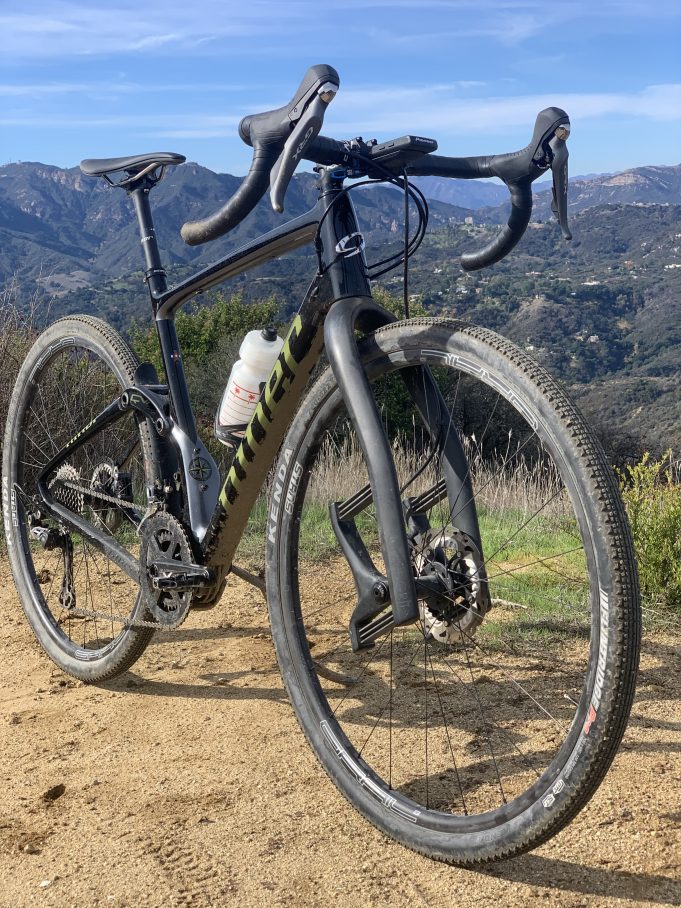 Next, we also swapped out the wheels for the lighter Stan’s NoTubes CB7 carbon wheels that come stock on the higher-end five-star build. When paired with the Lauf fork, the wheels brought the bike’s weight down to just over 23 pounds. There are plenty of other small changes we could make to lose a bit more weight. But for a bike that will always be on the heavy side, we sure did have a lot of fun.

Sidi Shoes – The Name Is The Legacy