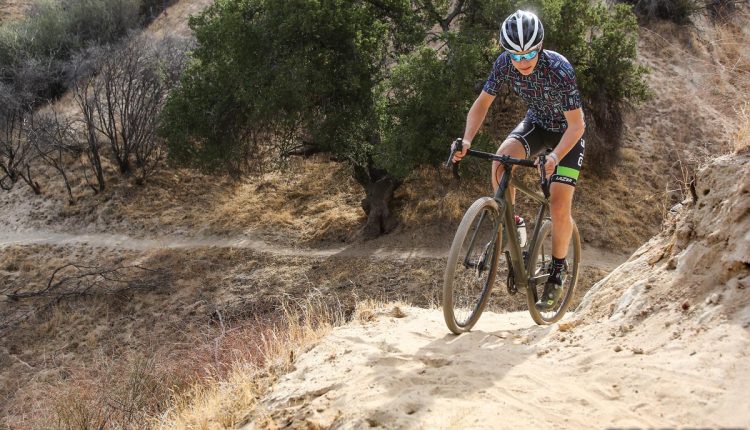 Editor’s note: Formerly Ocoee Bikes, Obed Bikes got their name from a stream in Tennessee. The adventure-bike brand makes carbon gravel and mountain bike frames designed with ruggedness and performance in mind to help you explore the nooks and crannies of your backyard.

While the Obed brand is new to the market, it comes to us under the auspices of the American Bicycle Group, which is the same team that runs Litespeed’s vaunted house of titanium bikes. While ABG continues to maintain American production for its Litespeed brand, the carbon Obed bikes are sourced out of Asia.

Some might remember that Litespeed actually used to market carbon bikes, but the name is (properly) so wedded to titanium that their black plastic offerings never really took off.  It was just last year the Chattanooga, Tennessee-based Obedrolled out a gravel/all-road rig, as well as a mountain bike.

One key difference with Obed is that it follows a consumer-direct sales model. With the success that CD brands like Fezzari and Canyon have enjoyed, ABG decided to rely on the new sales model while also adding a few
special features. 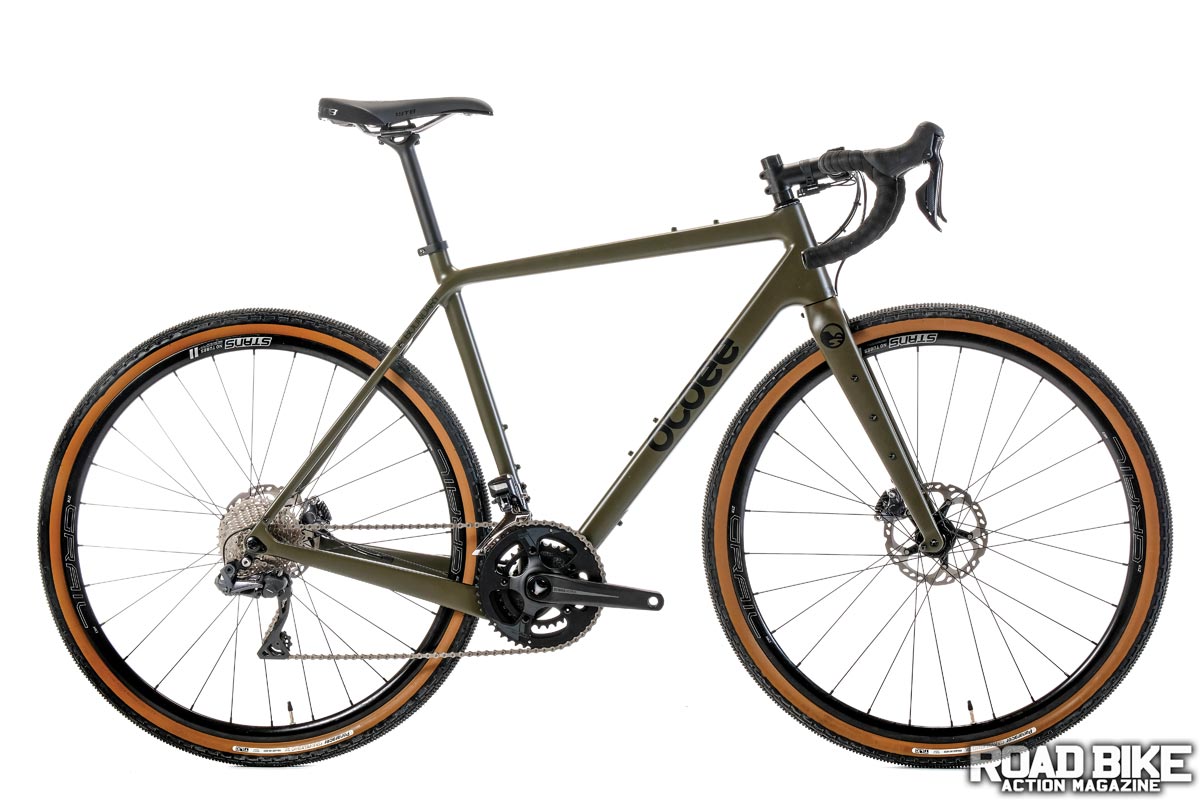 The Obed Boundary’s carbon frame touts a massive box-section downtube and seatstay combo coated in a subtle Matte Olive paint with two additional color choices (sand and blue). You’ll find four rack mounts along each side of the carbon fork and mounts for up to three water bottle cages—two on top and one under the downtube. The fork and seatstay bridge are drilled for fender mounts as well, which is just enough mounts to be considered well-rounded for commuting and touring.

The size medium’s long 102.6mm wheelbase is paired with a slack 71.5-degree head tube angle and 43.5cm asymmetrical chainstays to provide a stable, vibration-damping ride. With these numbers, the Boundary is much more of a go-anywhere bike intended to tackle roots and rocks rather than the front of a race.

The Boundary uses the same frame geometry as Obed’s all-road bike, the Baseline. The main differences being the fork, the wheel and tire combos and the drivetrain options. With that in mind, the dual-purpose ability of the Boundary/Baseline shines with an extra set of tires or wheels to swap depending on the flavor of riding you’re looking for.

Obed’s Boundary is available with three Shimano build kits, starting with a 105 mechanical, an Ultegra mechanical and an Ultegra Di2 level, all with hydraulic disc brakes and 160mm rotors. We opted for the Ultegra Di2 model since the electronic shifting is quicker than its mechanical counterpart, and for $700, it’s a worthy upgrade.

Instead of a full Shimano Ultegra drivetrain, Obed opted for a Praxis Zayante crank with an Ultegra RX rear derailleur. The 48/32 chainrings can then be paired with an 11-34 rear cassette for a lower-than-1:1 gear ratio, adding to the gravel-focused nature of the Boundary. Also making it better suited for the dirt rather than the road, is a pair of 43mm Panaracer Gravel Kings mounted to Stan’s Grail MK3 rims.

A feature usually not offered for free from big-name brands is Obed’s custom component sizing option. The in-house-branded handlebar and stem are available in a variety of sizes to choose from, and the same goes for the length of the Praxis crank.

Obed also offers 650b wheels (with 48mm tires) instead of the 700s, at no additional cost as well. Another gravel upgrade is offered in the form of the Cane Creek eeSilk suspension seatpost. It adds 20mm of adjustable suspension for an additional $200.

For those looking for the road-oriented build, the Baseline is available with the same Shimano build kits, but with compact Shimano chainrings up front and a set of 32mm Panaracer Gravel King slicks mounted to the Stan’s Grail MK3s. Since the thru-axles lack QR handles, don’t leave home without a multi-tool.

Our time spent on the Obed consisted mostly of the steep fire roads in our backyard. The winding dirt roads put up a challenge with rocks, ruts and sand left behind from recent fires. But, the Boundary was up for the task.

“The dual-purpose ability of the Boundary/Baseline shines with an extra set of tires or wheels to swap.”

Climbing is aided with the 32/34 easy gear. The lower-than-1:1 gear ratio and stock 43mm tires kept us planted and spinning over niggling rocks on the steepest 15-percent grades. The frame is stiff in the bottom bracket, which helped maximize each pedal stroke. When climbing these fire roads on other gravel bikes with less-than-40mm tires, we’d encounter plenty of challenge when the road got sandy. The front wheel would tend to sink and pull to the side, especially at low climbing speeds. But, thanks to grippy Gravel King rubber (at 35 psi with inner tubes), the Boundary was able to glide through the soft stuff.

Back down the same winding roads, the slack frame angles and long wheelbase provided easy-to-control, predictable handling. Much like when climbing, the wide rubber glides over sand and pushes rocks to the side, while the frame compensates for minor handling mistakes. 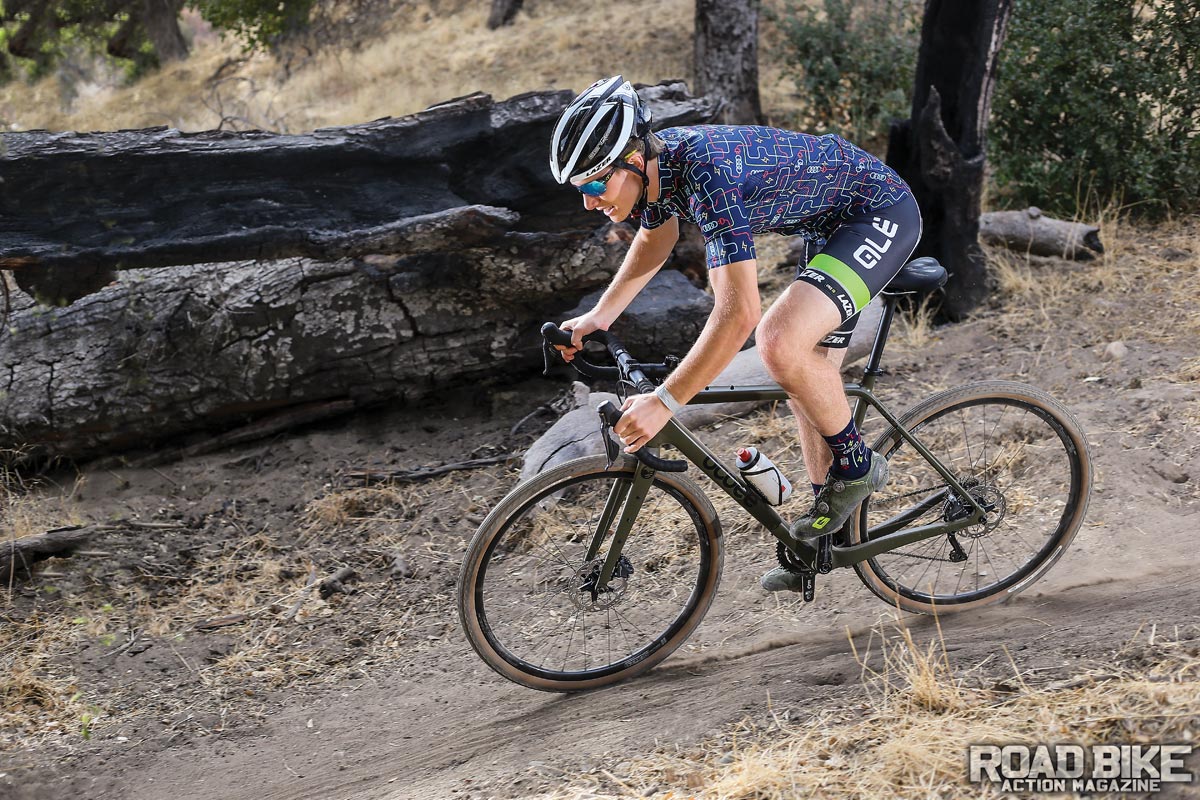 Over rolling gravel, we noted there were a few wide gaps in the gearing of the rear cassette that had us spinning too much or not enough. Drivetrains like SRAM’s 12-speed AXS deal with this issue but run a couple thousand
dollars more.

On the pavement, the Boundary’s ride was a bit monotonous, or less spirited, than a road bike, but that could be expected since it is a gravel rig. We threw on a pair of 32mm slick tires to essentially create the same build as Obed’s Baseline all-road bike, and after a few rides in we found it to have many of the same characteristics of a modern road bike. Yes, tires can make a big difference! We usually ran 60–70 psi in the tires and found the same predictable and confident handling traits on the road.

Sure, there might be a few reasons to dislike the current consumer-direct model, but the heightened level of personalization and quality of build at a hard-to-beat price point make a bike that might be out of reach for some more attainable. All of which can help add up to more cyclists on better bikes, and we like that. The Boundary checks many of the boxes for gravel riding in our area: low gearing for the climb, predictable handling for the rough stuff and, best of all, the kind of dual-purpose ability that comes with having an extra set of tires handy. Since every gravel road is different, it’s wise to consider what your local terrain is like, but more than likely, the Boundary will be able handle it.

While the Obed isn’t the eye-popping variety of gravel race bike that is attractive to some, it may be the bike that will keep an adventurous rider discovering new roads and longer rides.