The Open WI.DE. brings a new level of—gasp!—fat-tire performance to the gravel world 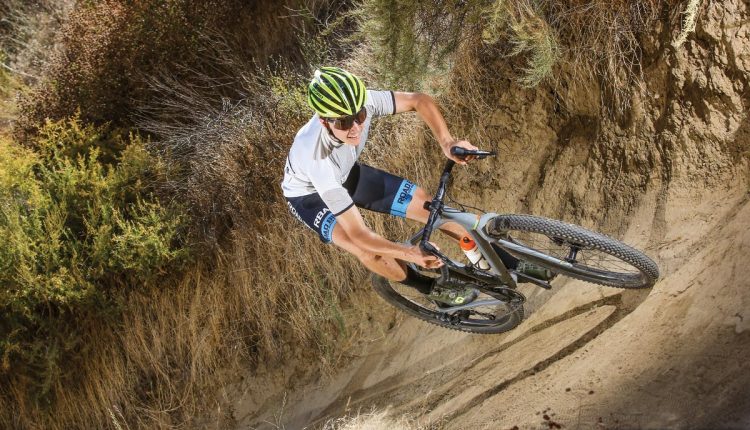 THE LINES ARE GETTING BLURRED

WI.DE. (winding detours) is the name of Open’s latest creation, and as the acronym indicates, it’s built for wide tires. More than that, the WI.DE. is an evolutionary result of their UP frame that rocked the market in 2016 with its dropped drive-side chainstay. Like the UP, the WI.DE. has road-inspired geometry that maintains nimble and responsive handling, but somehow they have managed to stuff huge 2.4-inch mountain bike tires between the tubes.

Since they first jumped on stage, Open has been on the leading edge of the quickly evolving gravel market, and now with their third frame design, they have pushed the limits of gravel into a new realm. The WI.DE. is a gravel bike, or maybe better described as a “get lost” bike, that is not deterred by the lines that have separated mountain bikers and road cyclists in the past. It seems to be just as happy shredding some narrow singletrack as it is bumping bars with the pavement set. 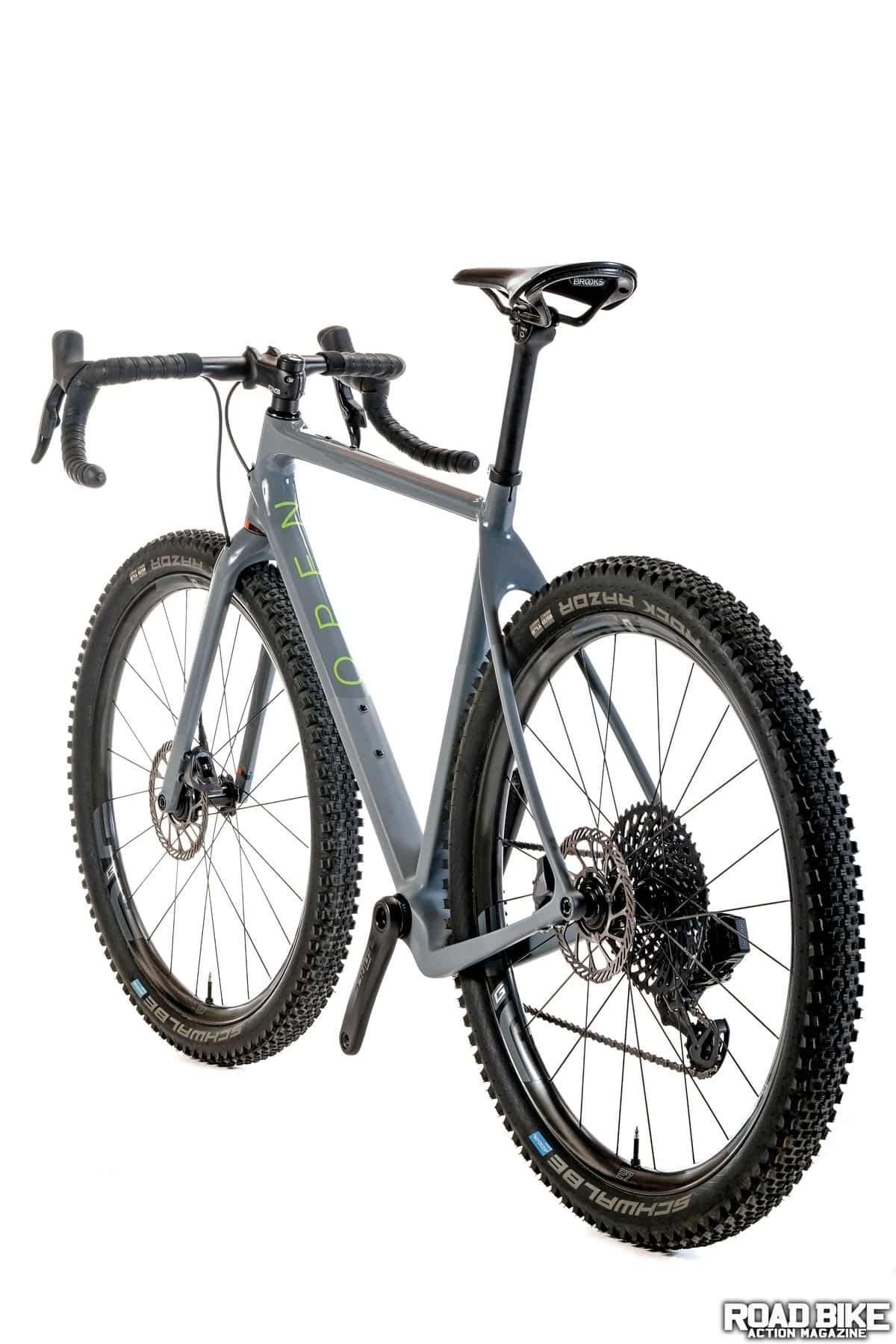 The WI.DE. frame very closely resembles the original UP geometry. There are some distinct differences and some subtle ones, too. The most noticeable is the WI.DE. has dual-dropped chainstays that give the bottom bracket area a large and robust look. It’s almost as if the downtube is extended and the bottom bracket is just placed higher on the tube. The intent of this huge box-shaped junction of downtube, bottom bracket and chainstays is to maximize stiffness while maintaining the use of the traditional road crank Q-factor.

Because the design of the WI.DE. was to stuff the largest tires possible into the restraints of road components, the frame is 1x-specific while maintaining a 42cm virtual chainstay length. The wide Press-Fit BB386EVO bottom bracket is narrower than the chainstays, thanks to a molded design that allows the spider and ring of the crank to narrowly pass. The seatstays are thin and have a slight curve to help focus flex, like the frames of the past.

“The WI.DE. is a true modern hybrid that has taken many small things from across the cycling industry and blended them together to create a truly surprising performance ride.”

All the cables and housings are run internally along our size medium with a 100.9cm wheelbase. There is a simple U-Turn fork with their Smartmount caliper that attaches through the front of the fork blade with no need for adapters. This design used the flat-mount caliper and is also implemented in the rear with both specific to 160mm rotors. The U-turn fork is fitted to the 15cm head tube that sat at 71 degrees on our medium test bike.

There is a stack of 57cm, a reach of 37cm and a virtual top tube length of 54cm. The bottom bracket drop is 75mm, and the geometry is designed to use a zero-setback seatpost. Overall, the Carbon frame uses a mix of different modulus fibers to minimize weight but simultaneously improves stiffness and durability. With a claimed frame weight of 1040 grams, this gravel monster truck is still surprisingly light.

Our test bike is a mix of road and mountain bike parts, and this is fitting because that’s what the bike is all about. The drivetrain starts with a SRAM Force AXS 1x crank fitted with a 42t chainring. It’s worth noting that when using a chainring that has an offset like the SRAM, a 42t is the largest, but if you have a flat ring, you can go up to 46t and as low as 38t. These numbers will vary depending on the crank, but 2mm of clearance is recommended. In the rear, Open borrowed from SRAM’s mountain bike parts bin for the wide-ratio XX1 Eagle AXS derailleur matched to
the 10-50t 12 speed Eagle cassette.

To slow things down, the Force AXS brake and shifters are mounted to a pair of carbon Enve G-series gravel handlebars with their compound flare. Mimicking the current mountain bike fashion/geometry template, a very short (a bit too short for our test riders) 70mm Enve carbon stem was spec’d but was quickly swapped. The 27.2mm Enve zero-setback post supported the 145mm-wide Brooks Cambium C13 with carbon rails.

Enve was also used to keep things rolling with their G27 carbon hoops laced to their alloy hubs. The rims use a hookless bead and were set up tubeless, thanks to a huge pair of Schwalbe Rock Razor tires in size 27.5x 2.35 (aka 650b.) If you choose to go with the 700, then a 46mm tire is the largest claimed size.

Let’s face it, the 650b tires look obnoxious, and the first few pedal strokes seem weird because the bike feels nimble, but the mass of rubber under you gives you the feeling that it shouldn’t be so easy. Before you know it, you’ve forgotten that you only have 20 psi in the tires and are zipping down the road at your normal pace. The only time you really notice the large knobs on the pavement is in corners where you are leaning hard, and the larger knobs are meant to give you added support in the dirt and send a constant reminder buzz that this bike wants to get dirty.

In the dirt the high-volume tires offer an amazing level of traction and control. The combination of responsive, nimble geometry with a large contact patch and pneumatic compliance pushes you to find new, adventurous lines. When climbing, the WI.DE. doesn’t feel heavy, but instead allows you to stay seated and take the shortest line, no matter the imperfections. The front feels light enough to lift over obstacles, but the short wheelbase and low bottom bracket can hinder this.

With our monster-trucking dreams temporarily fulfilled, we swapped the 650b setup for a 700cx40mm tire option. The smaller tire and higher pressure offered even more responsive handling on the road. With fewer knobs on the side of the smaller gravel tire, we could go much harder into sharp, paved turns; we might even say faster than we could on many of the endurance road bikes that have been in the RBA stable. The short 100.9cm wheelbase makes this bike truly handle like a road race bike when smaller (30-32mm) tires are mounted.

The bike is laterally stiff, and this can be hard to feel with such large tires, like the stock 650b Schwalbes under it, but is easily translated with the downsized rubber. The front end was fairly low and feels good 98 percent of the time, but if you do detour too much and find a steep off-road descent, things can feel unnerving in the drops.

Overall, the Open WI.DE. is pushing the boundaries of where we can take a drop-bar bike and what they should look like. Honestly, it looks a lot like the first few years of early mountain bikes, but with much more advanced materials, making it probably more capable. The crazy part is that, thanks to its aggressive geometry, it does an amazing job on the road, too.

What is holding it back, you might ask? Well, since the bottom bracket drop is pretty far, we wouldn’t suggest going too much smaller than a 650b 2.1; otherwise, you will endure pedal strikes aplenty. So, if you want smaller tires, jump up to the 700c wheels and stay above 30mm.

The WI.DE. is a true modern hybrid that has taken many small things from across the cycling industry and blended them together to create a truly surprising performance ride. It is obvious that Open thinks much further outside of the box, allowing them to deliver a bike that is unique in ride and aesthetic. There are a lot of small details that all add up to a final product that delivers on so many levels and across so many categories. The Open WI.DE. is available as a frameset for $3200, and as you can tell from our test bike, the sky is the limit on build options.