THE LEGACY BRAND IS LEADING THE CHARGE 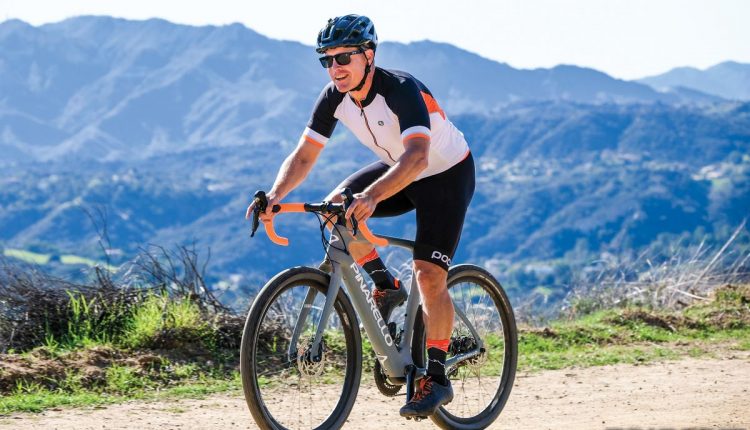 Pinarello is one of the historic Italian brands that is synonymous with racing. Their heritage is full of leaders’ jerseys and Grand Tour wins, but what really sets them apart is their ability to maintain a leading position in a quickly evolving market. For a company as large as Pinarello, they seem to have a finger on the pulse of the community with a bike that meets all the criteria, no matter the category. That’s why when we got word that a Pinarello Dyodo Gravel was on its way to production, we weren’t surprised they had jumped into the growing e-gravel category. 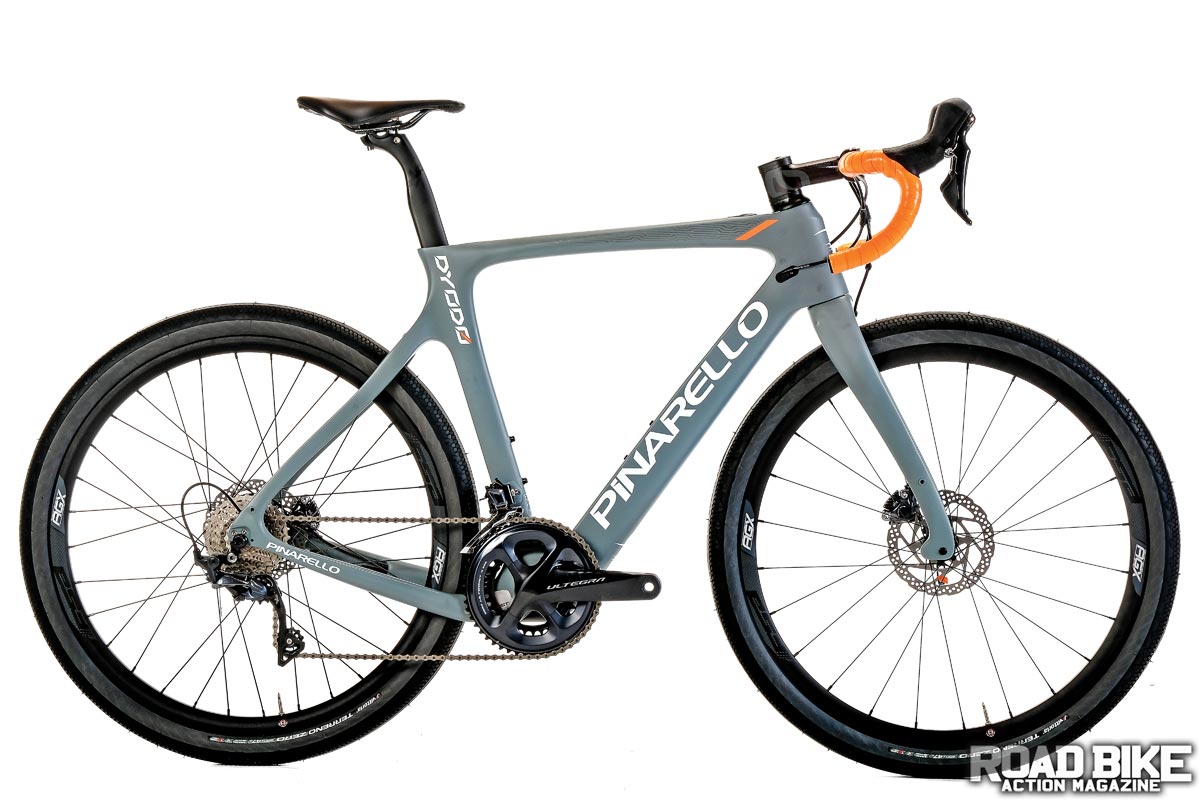 Smooth lines and shapely design are what we have come to expect from Pinarello, and the Dyodo is no different. The sleek T700 carbon frame falls right in line with the rest of the Pinarello line. What sets it apart from its non-assist siblings is the downtube houses the 250-Wh battery that powers the electric motor, but more on that later. The bike is offered in five sizes, and our size 53 has a reach of 37.6cm with a stack of 56.2cm.

The electric assist comes from a Class 1 Ebikemotion X35 hub-drive unit that delivers 40 N/m of torque and a max assist speed of 20 mph. An iWoc One controller is located on the top tube. The 250-Wh battery is stored in the downtube, with an optional battery range extender that offers an extra 208 Wh. Our test bike rolled on 650b Vision Trimax 30 tubeless wheels and Vittoria Terreno Zero 650×47 tubeless-ready tires.

The rest of the drivetrain is very road-oriented with a full Shimano Ultegra package. The 50/34 crank is matched to an 11-32 cassette. A mechanical Ultegra GS (long cage) rear derailleur moves the chain along the wide range. Hydraulic flat-mount brakes are matched with 160mm six-bolt rotors.

The cockpit is all in-house brand Most with an alloy stem and Jaguar GR flared handlebars. The bars are 42cm up top and 47cm in the drops, so not an overwhelming flare. There is an aero-shaped carbon seatpost with a Most Lynx short saddle.

First impressions were good, and the initial bike setup is the same as any other road or gravel bike. The integration of the Ebikemotion system is spot-on and from a distance goes unnoticed. The iWoc ONE controller is really just a button mounted on the top tube with a multicolored LED ring around it that allows you to power on the system and switch between assist modes. The LED ring also indicates battery life depending on its illuminated color.

Just above the bottom bracket on the inside of the front triangle is the system’s charging port and where the optional battery-range extender plugs into. The dead giveaway that it hides assist is the oversized rear hub that houses the motor. As with road bikes we’ve tested using the hub motor, the 20-mph limit seems silly and only becomes less silly when things tilt uphill. For anyone who says riding an e-road bike is cheating, they haven’t tried to stay up with a group ride. Just imagine riding a nearly 28-pound bike that cuts off at 20 mph with the group!

The geometry is fun and stable on the road, but the 47mm tires boost out to 50mm and slow the response of the bike. However, when you hit the dirt, the story changes. The 20-mph limit is now rarely achieved, and the system seems to help you all the time. The large tires offer lots of traction even with their slick profile. The bike’s geometry is a bit aggressive for gravel and more on the confident racer side of the spectrum.

“The battery offers enough power for a 2–3-hour ride for most test riders, but if you’re climbing with the most amount of assist, don’t expect to get much more than an hour or so.”

Now, since the motor is a hub drive, it doesn’t take advantage of the bike’s gears like a mid-drive does, making it slightly less efficient than other systems. At 250 watts, the motor is not incredibly powerful. Meaning, it also isn’t going to propel you up every hill at its max speed with minimal input. The system relies heavily on a rider’s power input. Think of it like regular watts that you would produce on a climb. Most of us can sustain 250 watts on a climb, but that’s nowhere near 20 mph, and even doubled at 500 watts you are still well under 20 mph.

Yes, you will go faster uphill, but it would take a strong elite rider to maintain the kind of rider power needed to meet or exceed the max assist speed on a climb. On the dirt rollers and flats, the bike gives you that extra boost of power and speed, allowing you to maintain speeds near its assist limit of 20 mph. The motor is also a bit delayed to respond.  It is okay when starting to pedal, but its biggest flaw comes when you stop pedaling. The motor takes what seems like forever, but is really about 1.5–2 seconds to cut the power. On the tarmac this isn’t as much of a problem, but on the dirt it’s sketchy.

On more than a few occasions when we were pedaling hard, we would approach a corner still pedaling, then stop pedaling in the optimal spot like a normal bike. This resulted in another 2 seconds of substantial power from the hub leaving us going faster than anticipated. We were then left applying the brakes in a corner when we shouldn’t be. It took some getting used to, and honestly, we found ourselves not pushing the limits as much when things got twisty.

“Pinarello has done a great job of integrating the system into one of their sleek, performance-oriented frames. The 650b wheels offer advantages in the dirt where the bike is most at home, but on the tarmac they are less than ideal.”

The battery offers enough power for a 2–3-hour ride for most test riders. But if you’re climbing with the most amount of assist, don’t expect to get much more than an hour or so. The iWoc controller on the top tube requires you to take your hand off the bar to change modes. Its LED colors can be a bit confusing at first too. There is an app for smartphones that allows users to customize a few settings. But most of our test riders were happy with the stock presets.

Unlike some of the other test bikes we have had with the X35 motor, the Pinarello was the easiest to remove the rear wheel. Many have covers to hide the wiring loom that goes to the rear hub, but this is all internal up to the disconnect junction. You will still need a 17mm spanner wrench or an 8mm Allen to remove the two axle nuts.

Our test bike might have been sent out a bit early, because although the spec sheet calls for an RX rear derailleur with a clutch, ours was a standard derailleur. Less of an issue on the road, the clutch-style derailleur helps prevent chain bounce and hopping between gears over the bumps.

Our chain is also too short and risks breaking the rear derailleur and hanger when we are in the big ring and reach for the easiest two cogs. This might not seem like a big deal, but with the extra power from the motor we found ourselves in the big ring more often. Luckily, the motor’s power doesn’t go through the drivetrain adding more torque on the derailleur when this happens. It also means wear and tear on the drivetrain is not accelerated like those of mid-drive systems. 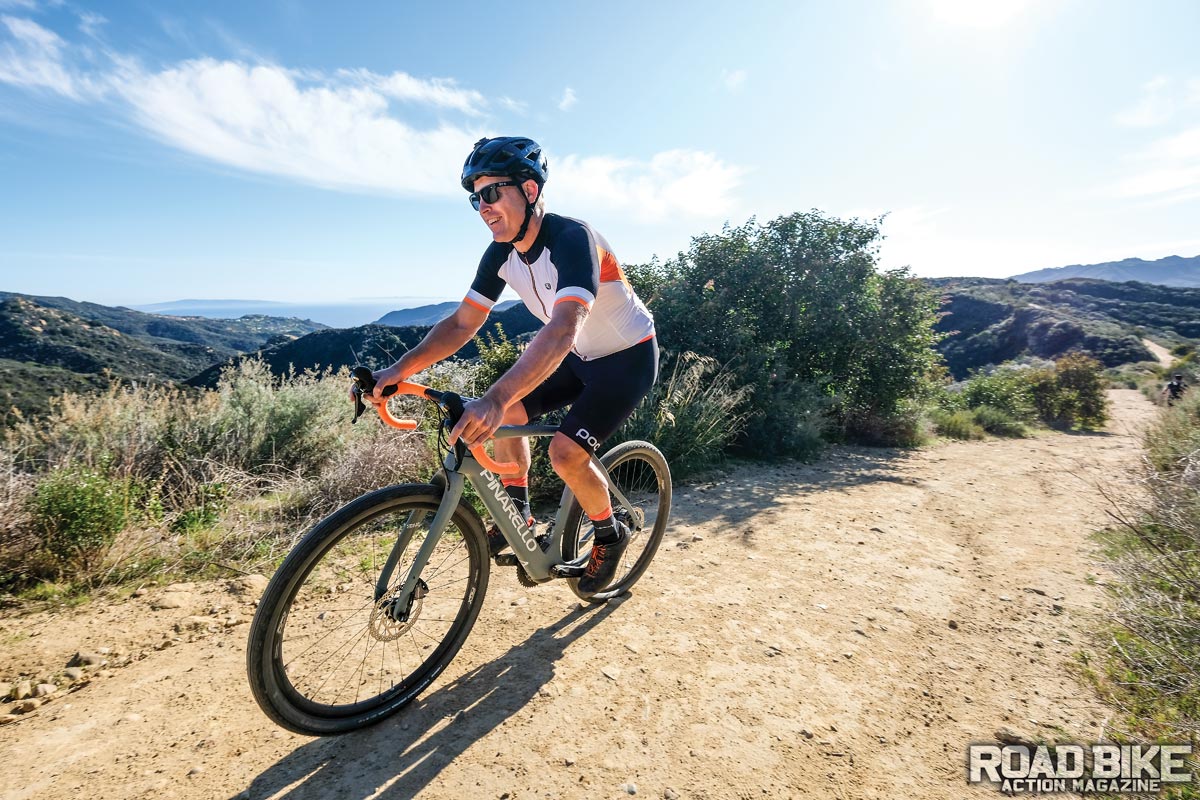 At the end of the day, the Ebikemotion system has both benefits and drawbacks. While we’re less than impressed with the hub motors on road bikes due to the limited speed assist, on a gravel bike it brings a more balanced experience.

Pinarello has done a great job of integrating the system into the sleek, performance-oriented frame of the Dyodo Gravel. The 650b wheels offer advantages in the dirt where the bike is most at home. On the tarmac they are less than ideal. The geometry is performance-oriented, but at almost 28 pounds, it’s a hefty load to move over its assisted speed of 20 mph. The added weight is rarely noticed when under 20 mph and is masked by the joy of pedaling with the added power.

20 mph is good for gravel but not tarmac