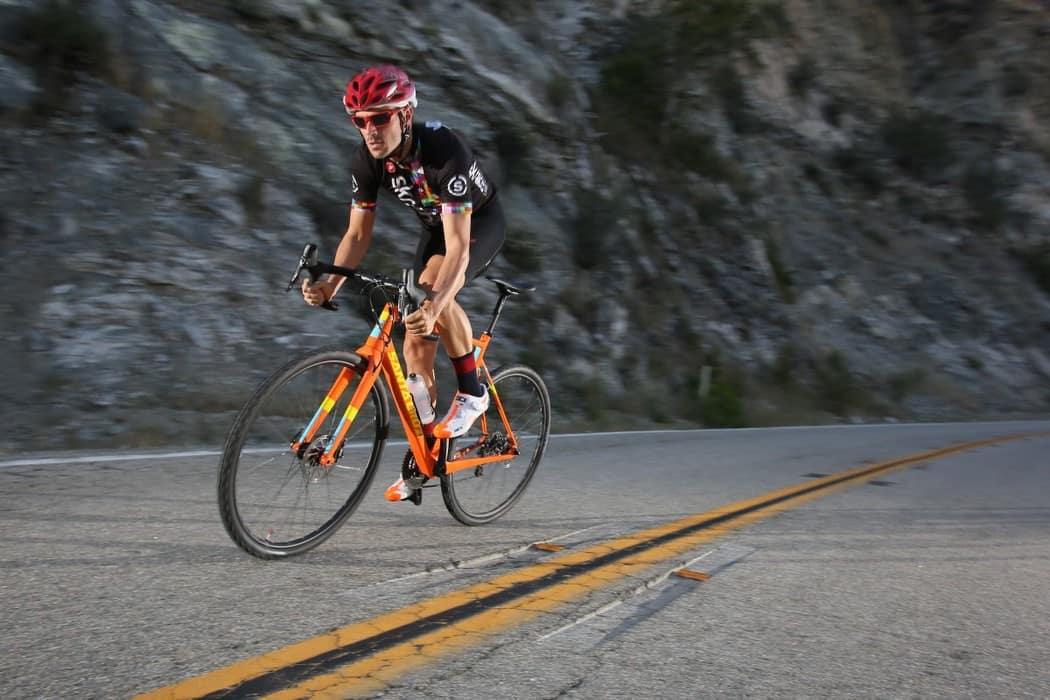 Celebrated as one of the sport’s most successful mountain bike brands (with an emphasis on building full-suspension huckers), for Santa Cruz to introduce a cyclocross bike, it’s practically akin to New Jersey’s rotund governor Chris Christie announcing a side gig as a ballet dancer. In other words, just a tad unexpected. But as the once segregated arenas of mountain biking, road and cyclocross continue to ﬁnd common cause by virtue of certain overlapping technical features, the universe of drop-bar bike brands has every ability to expand.

As the old saying goes, “Timing is everything,” and since 1993 Santa Cruz has always seemed to have good timing with both their bike design and marketing efforts. And now, with the burgeoning inﬂuence of gravel riding tacking onto the sustaining popularity of the cyclocross scene, the time seemed especially right for Santa Cruz to apply the latest in dirt bike know-how with the drop-bar scene. 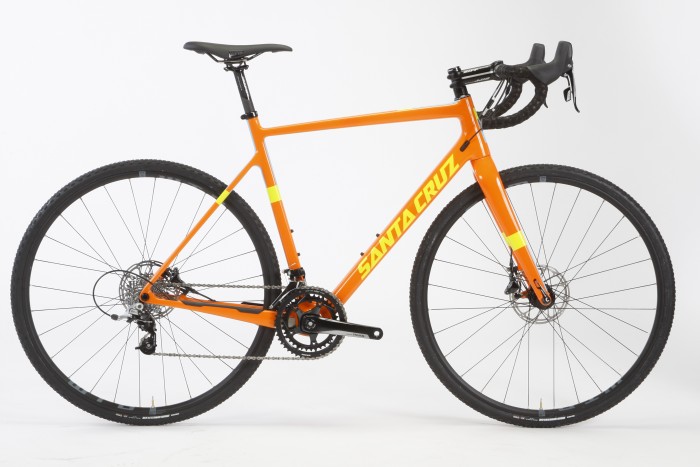 THE FRAME
From the sloping top tube and dropped seatstays to the square-shaped tubes, “clean” was the one word used most often by people describing the look of the Stigmata. Not everyone was taken with the bold color scheme, but for them, a more subtle black version can be had. In addition to the internal cable routing, friendly to either mechanical or electronic, the frame is designed to accept tires up to 41mm in size.

The Stigmata is available in ﬁve sizes and three price points: $3699 (tested), $4699 and $6599. Frame features include a PressFit 30 bottom bracket (with 69mm drop), a tapered head tube, perfectly positioned internal cable routing and, most interestingly, nary a round tube to be found. 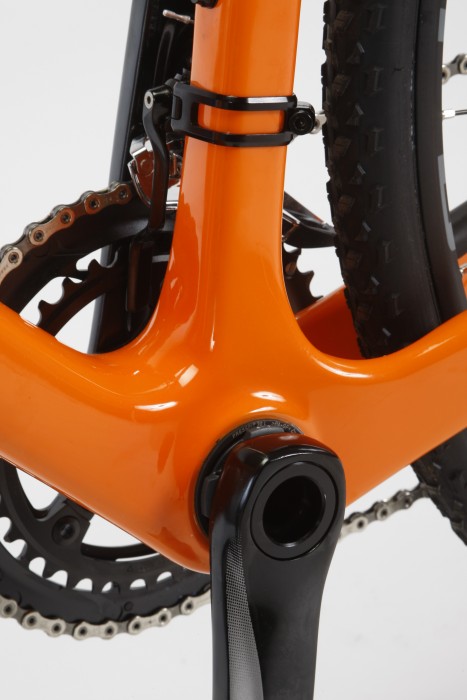 THE PARTS
The stock Stigmata is available with three different SRAM drivetrain options: Rival or Red (with dual chainrings), or the single-ring Force CX1. Santa Cruz also has a custom bike-builder program to offer a more personalized build.

All three models rely on sturdy Zipp aluminum Service Course stems, handlebars and seatposts. The tubeless-ready WTB hoops are laced to 28-spoke DT Swiss hubs with a 15mm front/12mm rear thru-axle combo. Although the least signiﬁcant of the parts spec, the Santa Cruz-branded handlebar tape was raved over by one and all. 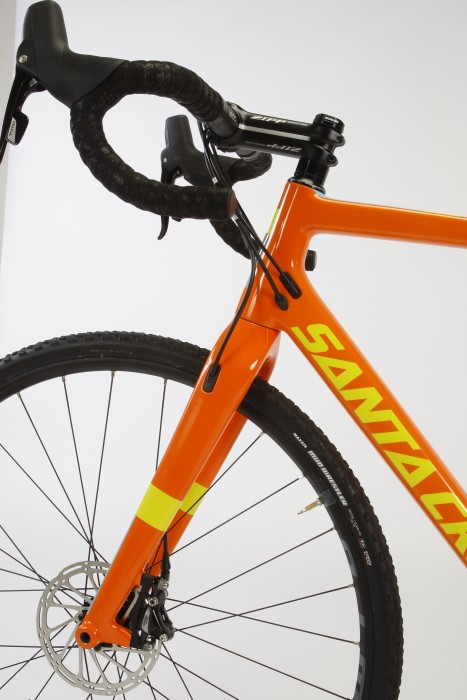 THE RIDE
Sure, sure, the Stigmata is all about cyclocross, but what right-minded ’cross rider is going to waste the seven months outside the ’cross season without taking such a dirt-capable bike off-road? So, we headed to the local network of ﬁre roads that encircle the palatial RBA towers to put the Santa Cruz to test.

As with most ’cross bikes we test, the Stigmata came with standard 46/36 ’cross chainrings mated to an 11×28 rear cassette. Although the gearing was ﬁne for tackling the road-heavy Belgian Wafﬂe Ride—yes, the Stigmata works just ﬁne as a road bike too!—some riders complained that the gearing was too tall for efﬁcient off-road pedaling. We quickly swapped out the 36 for a 34t chainring (31.8 gear inches versus 33.9 gear inches) and found our dirt road plodding much more enjoyable. 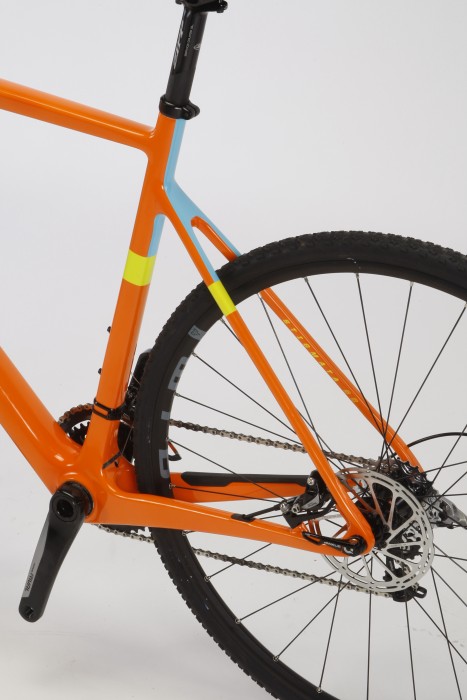 The Stigmata’s gearing reﬂects the industry’s age-old problem of over-gearing bikes. While the 36×28 low gear is an easy sell when pushing 23c tires with 110 psi on slick blacktop, it’s more of a handful with tires that can grow in size up to 40mm. And as the Stigmata became a go-to gravel bike (owing to there not being ’cross races for another three months), we swapped the stock 32mm tires in favor of some 40mm WTB Nano knobs, which made the lower gearing even more appreciated.

Out on the trail the Santa Cruz proved impervious to stutter bumps, not only capably soaking the hits up through the frame but with fantastic front-end stability. Between the tapered head tube, stout fork blades, and 15mm thru-axle, the Stigmata’s steering was never victimized by the terrain.

THE VERDICT
The only shortcoming, again, was the gearing. Since top speed is rarely an issue for either gravel riding or cyclocross racing, why not spec an 11-30, or even an 11-32 cassette, to make climbing easier? Sure, the fast riders will snicker, but it would make sense for the entry-level model, especially since lower-priced bikes often reﬂect a less proven rider. 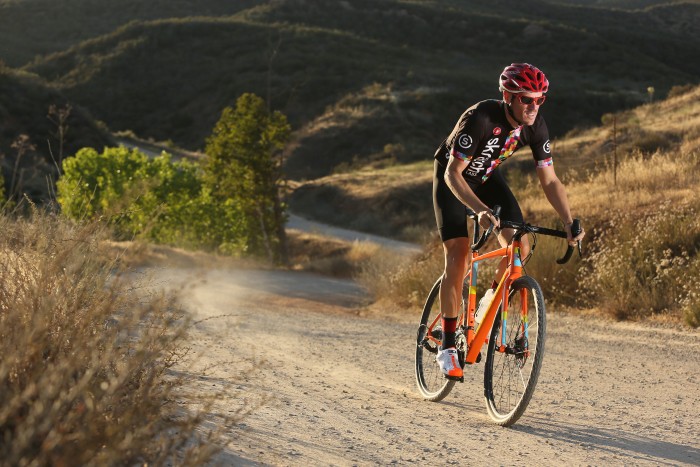 While we never laid eyes on the carbon Stigmata’s aluminum forebear, in lacking modern amenities like disc brakes, thru-axles and a carbon frame, it’s safe to assume that it rode nothing like the new version. For as well as the carbon version handled some hardcore off-road abuse (we even raced it in a mountain bike race), we can’t imagine there’s a cyclocross course anywhere that would have the Stig’s number.