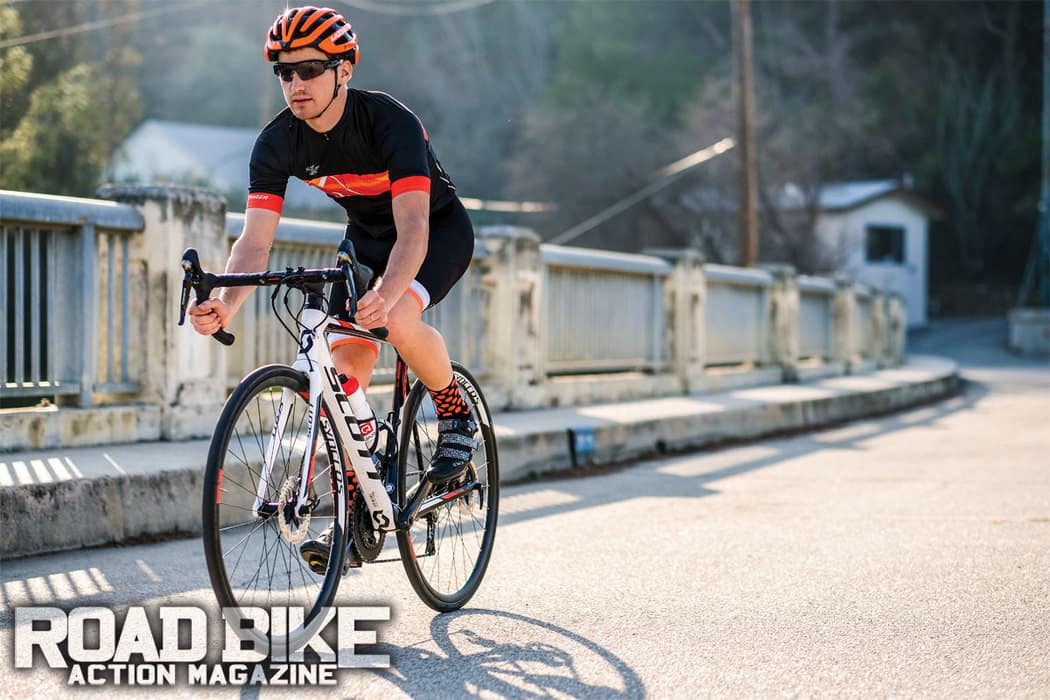 Another entry in the road-disc market

Scott has used the Addict designation since 2007 when they touted it as being the lightest road frame on the market at 790 grams. Since then, the Addict has taken on new forms with the addition of a cyclocross and also a gravel version, but still with an emphasis on a light and stiff frame. So, it was no surprise when the release of the Addict Disc was announced, combining the legacy of the Scott name with the new wave of road-disc technology. The Addict 20 Disc is made with Scott’s own HMF carbon layup. Scott offers three different levels for the Addict line, including the HMX SL that is only available in the non-disc Addict, and HMX, which is used in the Addict Premium Disc. Each of the three layups vary in quality level, which affects the number of layers needed to deliver the desired ride characteristics and strength. This also in turn will affect the frame weight and price.

With the addition of disc brakes, Scott was able to lose the brake bridge that connected the seatstays, which helped minimize the amount of material used, thereby allowing added compliance in the saddle. This loss in material was then transferred to the chainstays for added strength around the flat-mount disc brakes.

On top of that, the addition of a 12×142 thru-axle adds lateral stiffness without negatively impacting the newfound vertical compliance. This migration of comfort, with the added performance of thru-axles, allows the Scott Addict to stand apart from its counterparts.

The front of the bike also runs a thru-axle/flat-mount brake upgrade. The frame gains 60 grams over the caliper version. The geometry chart has been unchanged and still leaves room for a 30mm tire with a wheelbase of 99.2cm. Our size-54cm test bike has a short 14cm head tube at 72.5 degrees, allowing aggressive positioning and responsive handling. Scott’s decision to hold the exact same geometry from caliper to disc makes it even easier to transition riders to the new platform.

The Addict 20 Disc is spec’d with the always-popular Shimano Ultegra 6800 drivetrain matched with the BR-RS805 hydraulic flat-mount calipers. Scott chose to use the 6800 GS rear derailleur, which means the cage is longer, allowing you to swap the stock 11-28 cassette out for something larger, like an 11-32 for bigger climbing days. This is especially useful since they chose 52/36 mid-compact chainrings up front.

For the additional parts spec, Scott stayed in-house, sourcing from their Syncros brand to help keep the price down and the durability up. They have chosen the 28-spoke (front and rear) Syncros RP2.0 Disc wheelset mounted with 28mm Continental Grand Sport Race folding tires. Although the larger tires might throw the look of a race bike off a bit, the added confidence and comfort they provide make it easy to overlook the added weight.

Syncros also supplied all the cockpit parts with their RR2.0 alloy bar-and-stem combo. They chose the Syncros Carbon FL1.0 27.2 seatpost to also add to the ride comfort and compliance. Mounted to the post is the Syncros RR2.0 saddle with fiberglass-injected shell and chromoly rails.

Our first impressions were a bit mixed, as the Addict 20 Disc comes stock with 28mm tires on rims that have a 24mm outside dimension and 19mm internal width. This all combines to give the tire a measured 29.5 width, which is on the large side for a race bike. But, after setting up the cockpit and saddle height, it was evident that the race-proven geometry the Addict is known for remained unaltered.

The addition of the disc brakes also meant a few minor tweaks to the rear triangle. These changes were evident on just the first few miles of in-the-saddle pedaling. The bike doesn’t have the jarring ultra-stiff feeling we tend to get on lightweight race frames. Instead, the Addict encourages you to push harder, and when you transition to out-of-the-saddle pedaling, the bike doesn’t hesitate to respond. The lateral stiffness is noticeable and transfers the full range of power from the bars all the way to the pedals.

This same stiffness also allows the Addict to excel at technical descending. Throw in the power and accuracy of disc brakes and you can wait longer to brake before turns and more accurately scrub the proper amount of speed. The disc brakes also change the point on the bike where braking can cause flex, so like many others, the answer is 12mm thru-axles. The thru-axle strengthens the fork and rear triangle without needing to overbuild the carbon. This means more vertical compliance but with much more lateral stiffness.

The Syncros RP2.0 wheelset choice seems to be two-part: first, it’s for durability and reliability, and second is cost. As most racers have their own preference of wheels and rim depth, Scott has supplied what amounts to a set of good training wheels that can accompany many styles of riding matched with many tire choices. At 1720 grams, the RP2.0s are a moderate-level wheel using DT Swiss internals for added reliability.

The Addict 20 Disc is a modern performance-oriented bike with a price point and component selection that make it a great starting point for most while still leaving plenty of opportunities to make it your own. The addition of disc brakes to a confidence-inspiring race geometry means new limits need to be set. Maintaining the same geometry that the caliper bikes have means that the transition for those that already love the Addict is easy and natural.

We like how the Scott is stiff and climbs with outstanding power transfer, but it’s also compliant enough for long rides without feeling abused. If you’re in the market for a race-capable bike, the Addict Disc could be a good pick, and with the premium version using Scott’s HMX carbon layup also available as a frame and fork for $3300, you can build one up from scratch.