A BATTLE FOR THE PODIUM 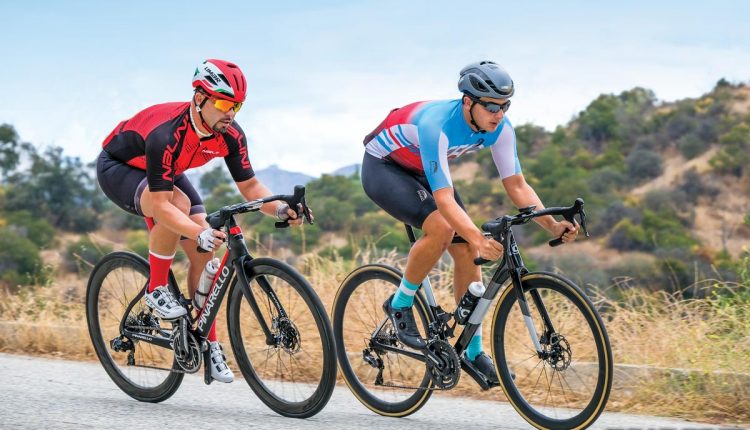 Pinarello is of course one of the most famous Italian legacy brands, and they have been building Tour de France-winning bikes for decades. The Dogma F12 follows in the footsteps of the F8 and F10, which the latter has enjoyed an especially successful Grand Tour run of victories under Chris Froome.

Cannondale’s latest SuperSix EVO release follows in line with the wholesome overhaul the brand has seen over the last year. Drawing on the wind-cheating benefits of their aero road SystemSix (RBA, November 2018), the traditional lightweight climber’s bike has been updated to make it a worthy all-rounder.

Instead of the traditional geometry and lines that Cannondale has relied on for years for the SuperSix, the 2020 EVO takes on a nearly completely different design that is more capable, aero and ready to handle on the modern road scene than ever before. 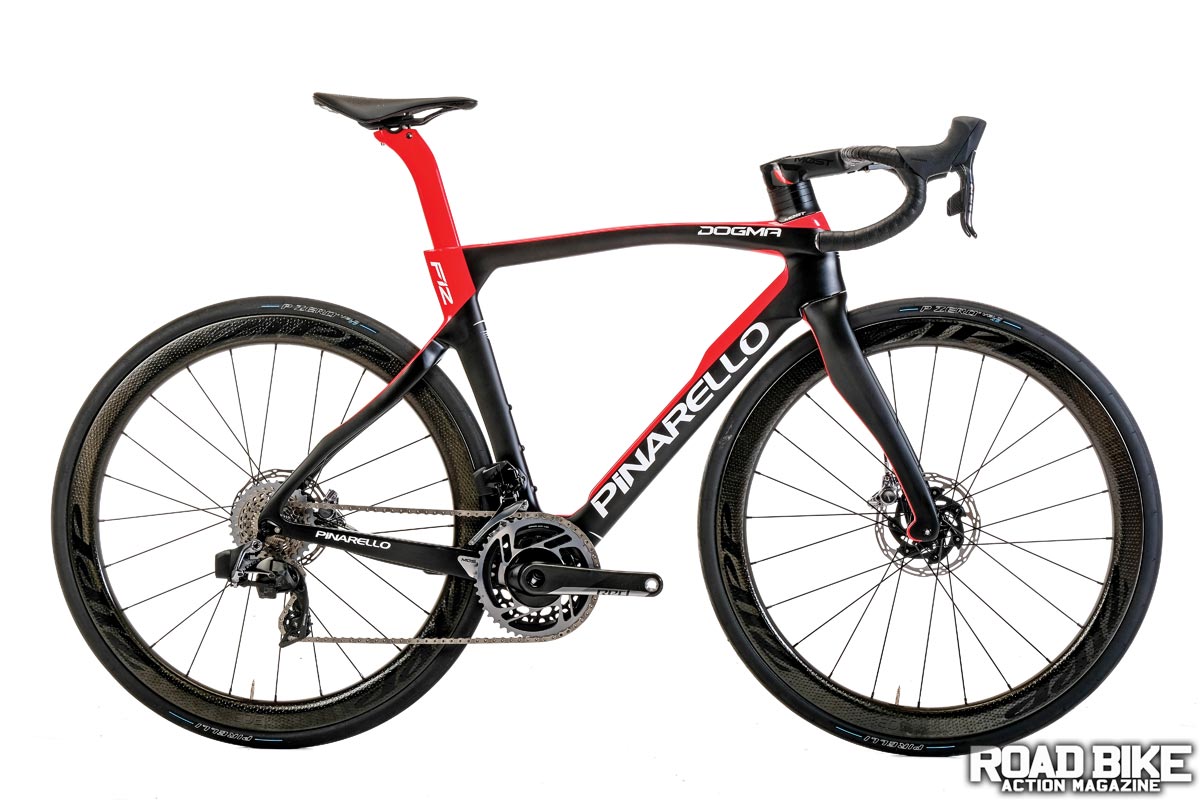 “Striking” is definitely one of the first words that comes to mind when you first cast your eyes on the F12. And no other aspect of the bike is more striking than when looking down on the rear wheel and seeing just how asymmetrical the frame is. Some people actually thought the odd shape of the frame was a blemish, but it’s in fact a signature element of Fausto Pinarello’s design.

More than almost any bike we’ve ridden, the Pinarello received consistent attention and comments. In short, the carbon frame is a looker. Yes, Asian-made, but finished off at the Pinarello factory in Treviso, Italy, and as always using the best Torayca carbon that money can buy.

“Some people actually thought the odd shape of the frame was a blemish, but it’s in fact a signature element of Fausto Pinarello’s design.”

In typical Italian “mind-the-details” legacy, the F12 is available in 13 different sizes. Our test bike rolled off the scale at 17.72 pounds, and Pinarello claims a raw frame weighs 840 grams. Our size-53 test bike measures in with a 98.2cm wheelbase and 40.6cm chainstays. The 12.3cm-long head tube is at 72.5 degrees, and the fork has an offset of 43mm.

Our F12 was drilled for flat-mount calipers and 12mm thru-axles. All cables and brake lines are completely hidden, and if you opt for the rim brake version, the front brake line is the only one exposed. While the frame still carries a very distinctive look that Pinarello is known for, there are some small changes from its predecessor that they claim have increased the stiffness without affecting the weight. As you might expect, the F12 uses an Italian threaded bottom bracket, so there are no fears of the pressed-in squeaks. 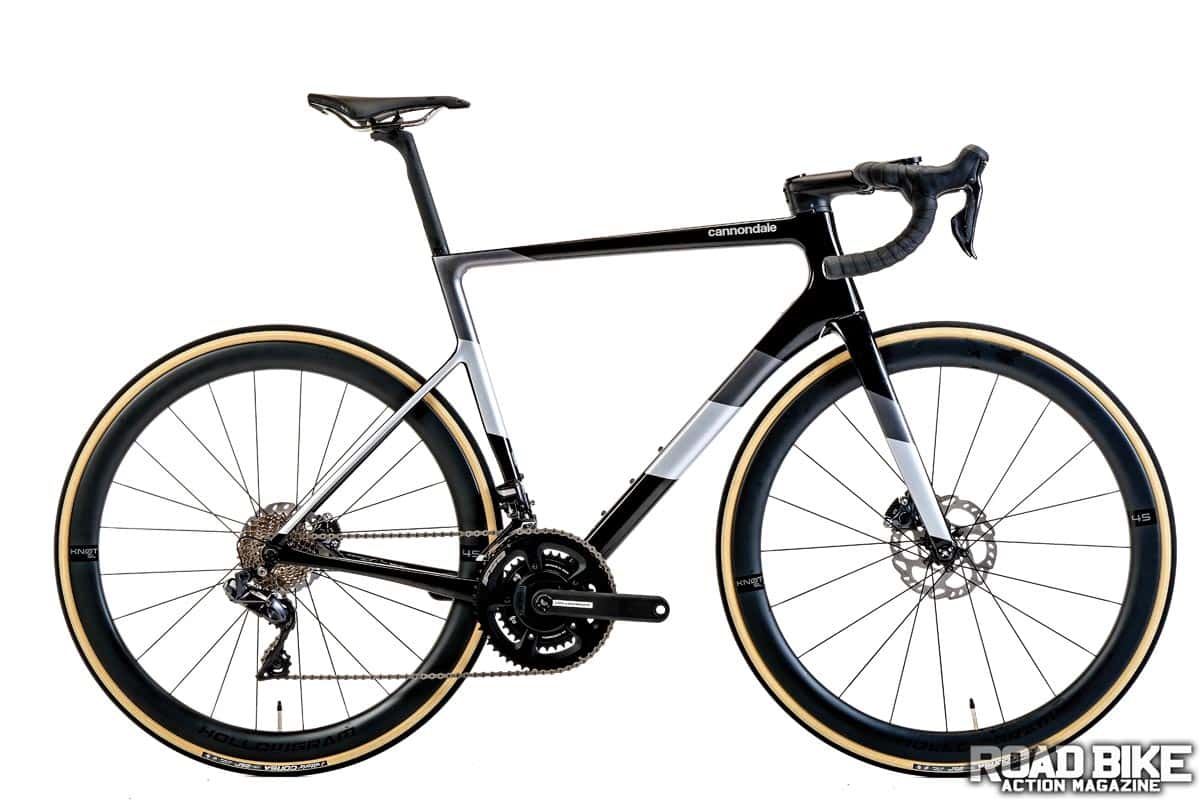 Minimalism seems to be what’s influencing Cannondale’s design team with nearly all of the latest releases from their headquarters in Connecticut opting for plain colorways that are missing the typical (over) branding and logos. The most noticeable difference in design are the dropped seatstays that had many people assuming it was a SystemSix at first glance. But no, Cannondale decided to drop the stays after wind-tunnel testing showed aerodynamic gains in the lower position.

Cannondale built the SuperSix frame in male- and female-specific geometries available in 12 sizes ranging from 44 to 62. A naked 56cm frame has a claimed weight of 976 grams. Straying from the classic geometry, Cannondale engineered a taller stack and a shorter reach for a more universal fit. No more than a 30mm tire is recommended, which is 2mm greater than we have been able to fit on previous models and is just another step towards modernity from Cannondale. Our test bike is the Hi-Mod tier, which uses a stiffer, high-modulus and lighter carbon weave in select locations to reduce flex. 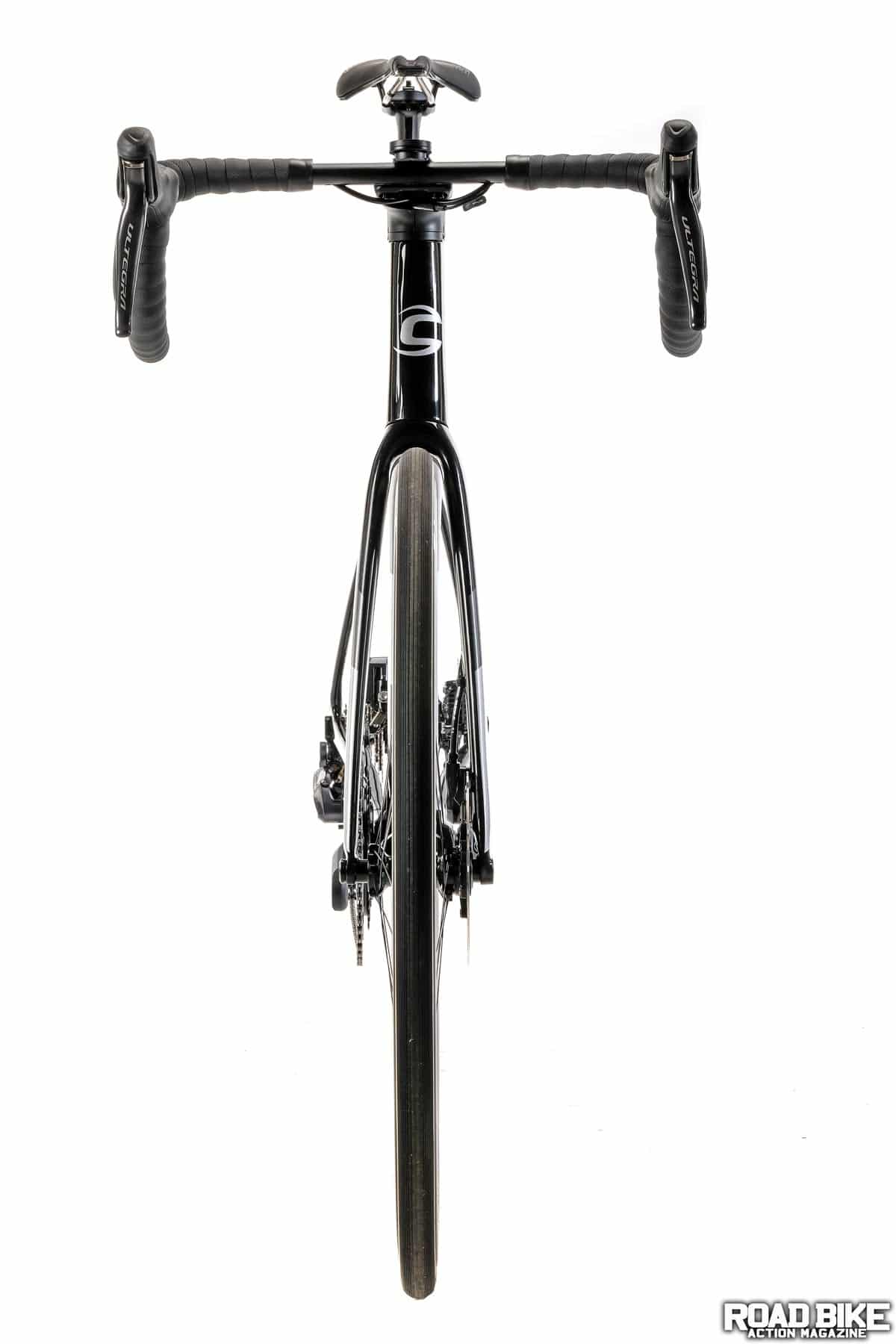 In place of the old-school quick releases, thru-axles are the rule and the SuperSix uses Mavic’s Speed Release version, which allows the wheels to be removed without removing the axles from the hub, thanks to
slotted dropouts.

Our test bike is an example of the $13,500 complete model that’s equipped with a SRAM Red eTap AXS drivetrain, rolls on Zipp 303 wheels and Pirelli P Zero Velo 4s 28mm tires. It might come as a surprise to many purists, but thanks to the 12-speed cassette, the small 46/33 chainrings matched to the 10-33 cogs provide for a wider range of gear inches than a more traditional “big ring” combo.

A trio of Pinarello’s in-house brand Most seatpost, short saddle and improved-upon Talon Ultra one-piece bar/stem combo. It’s this last component that Pinarello seems most proud of, as it does well to not only increase the aesthetic appeal of the bike by hiding all the cables, but according to Pinarello, it also aids in the bike’s aero efficiency. There are a whopping 16 different bar/stem combo sizes ranging between 42–46cm and stem lengths from 80–140mm. 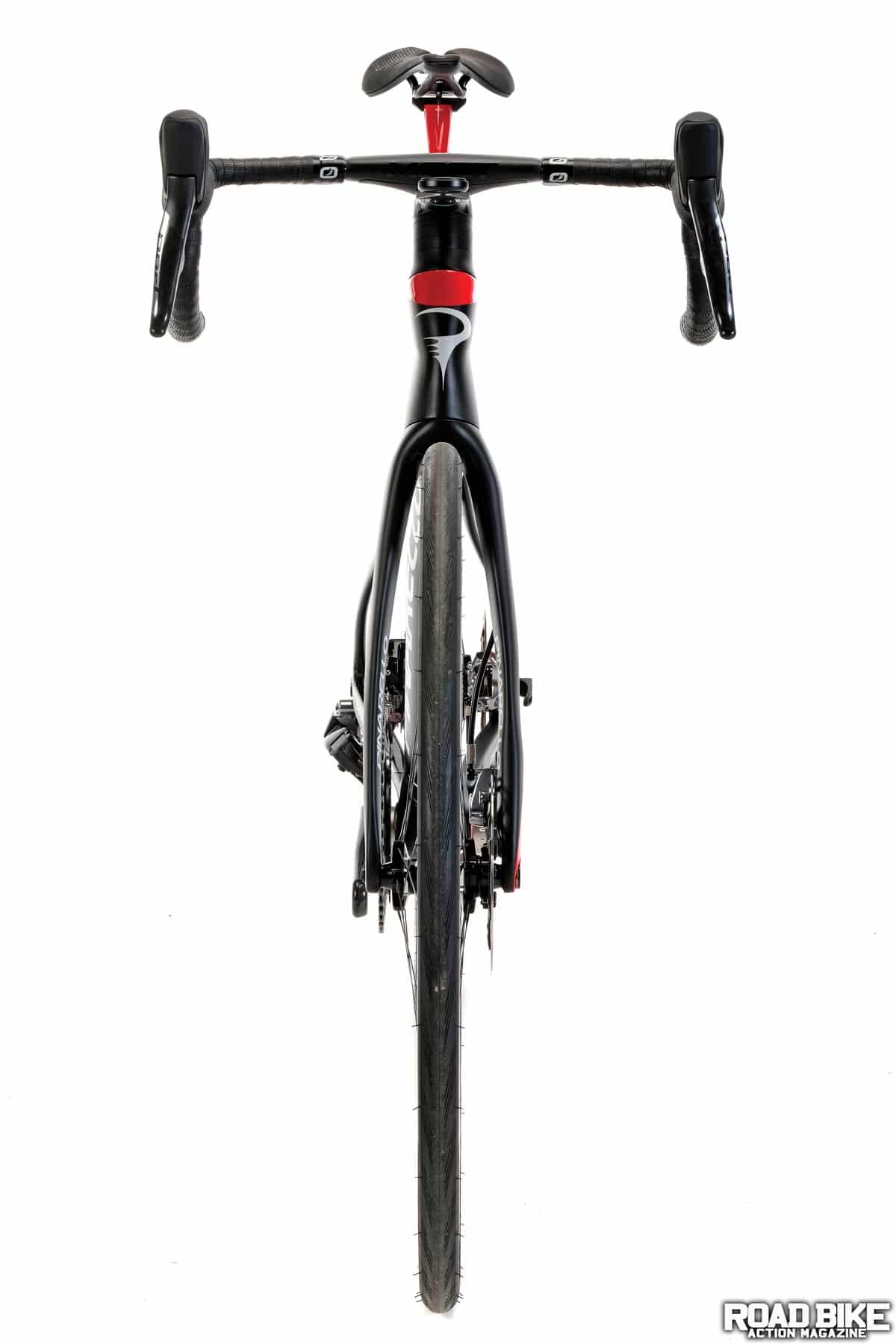 Typically, a Shimano Ultegra Di2 hydraulic disc-brake bike ranges from $4500 to $6500, so when the $7750 price point was announced for the Hi-Mod, we found ourselves scratching our heads. The bike was spec’d with 52/36 chainrings and an 11-30 cassette. Like the SystemSix, the SuperSix is shipped with a Power2Max power meter installed with the option to activate it for $500. A 160mm/140mm brake rotor combo is used to save weight
without sacrificing necessary stopping power.

The SuperSix is stocked with an in-house-branded Knot cockpit that marries an alloy stem and an aero carbon handlebar. The pair work together to hide cables and wires, but at the junction from the bar to the stem, the wires show and add a bit of drag, something the Dogma’s Most system prevents. Another twinge that pulls from the SuperSix is the raised computer mount on the bars. Usually, an integrated mount is used for aero benefits when the computer sits at the same level as the bars; however, on the SuperSix, the mount sits atop the bars and adds another point of drag.

The stem offers 8 degrees of pitch adjustment with five length options ranging from 80mm to 120mm at a 17-degree angle. Keeping things rolling is a 45mm-deep Knot 45 wheelset that has a 21mm internal rim width. This is an appreciated modern upgrade from Cannondale. A Knot D-shaped seatpost is used as well.

First and foremost, Pinarellos have never been known as lightweight wonders. Nudging just under 18 pounds without pedals is not bad, but it’s still giving away up to 2 pounds over a handful of other carbon race bikes with disc brakes that we’ve tested.

Weight aside, the best part of the bike is the handling. For an Italian bike it’s tame, but don’t get us wrong, we love it. It is a modern, performance race bike and hasn’t been held back by the old traditions that leave you biting your tongue and nervous in every corner. No, the F12 is like driving a race car with power steering and ABS. It’s fun, fast, responsive, and did we say fast?

The bike feels tall at times and the short head tube can leave the saddle well above the bars, but the F12 still handles like a dream. It’s not the one-trick pony that many aero bikes have become—a funny bike with road bars. The F12 is a complete bike. Three bottle cage mounts provide options and reaffirm the idea that a bike can be faster with bottles on it if you design it right. But, they have to be low (and harder to reach).

As it was intended to do, the 12-speed AXS drivetrain with a 46/33t chainring combo allowed riders to stay in the big ring for longer periods, which, yes, was and is a good thing. The smaller front chainring also means that you will find yourself further out on the cassette where there are only 1-tooth differences between cogs. This reminds us of the days when racers would run 11-21 or 11-23 cassettes to minimize gear-tooth jumps; now we can have the best of both worlds. As one tester said, “The AXS gruppo has swung me from a SRAM hater to a lover all in one
fell swoop.”

Look, we get the weight thing, but we also embrace the reality that disc brakes are superior in every measure of performance over caliper brakes. In its current form, the Pinarello F12 is as capable of going fast as it is slowing down. We like that. And with Julian Alaphilippe keeping Team Ineos on their toes, it’s certainly hard to argue that Ineos has any advantage with the old-style brakes.

Thanks to its stiffened bottom bracket, the SuperSix EVO’s ride quality has been vastly improved. In addition to the frame improvements, the 25mm Vittoria tires, which ballooned up to about 27mm on our Hollowgram rims, also buffed out a portion of the road feedback.

After extended testing, the new geometry began to grow on our test riders accustomed to past SuperSixes. The taller stack and shorter reach reminded our riders of other all-around bikes like the Specialized Tarmac
and produced similar compliant ride qualities.

Descending on the EVO feels confident at speed thanks to its 99.2cm wheelbase. While cornering, the EVO grips the apex and moves where you point it, but requires a bit more leaning in tighter corners than the previous SuperSix.

Perhaps most noticeable enhancement on the road is how stiff the bottom bracket is. There is a noticeable gain in power transfer and reduction of flex when pedaling seated or out of the saddle. No, it’s not as stiff as the Dogma, but it is much more efficient than previous Evos.

Shimano’s Ultegra Di2 disc groupset provided the bike aggressive gearing with its 52/36 chainrings, and the 30 in the back left us yearning for the latest SRAM AXS 1:1 gear ratios, but for anyone upgrading from a 28-or-smaller rear gear, the 30 will be greatly appreciated.

The F12 on a group ride is like driving a Ferrari to a JDM car meet-up. Everyone recognizes it and has a bit of internal jealousy. If the $13,500 tab is too high for you, there is also one other “cheaper” version available—the $12,000 model built with a Shimano Dura-Ace Di2. Still too costly? Luckily, the frameset is available for $6500, which is pretty standard for a bike of this lineage.

The SuperSix is an entirely new bike that looks to change the face of Cannondale moving forward. No longer an over-branded, weight-optimized machine, the 2020 SuperSix EVO has minimal marking and only a sticker with the SuperSix EVO name. Cannondale has brought the EVO on par with their competitors in terms of ride quality.
There are 11 models of the new EVO ranging in price from $2200 for a Shimano 105 rim brake group to the $11,500 Hi-Mod Shimano Dura-Ace Di2 disc build. Although there is no SRAM Red eTap AXS build, the Dura-Ace bike still saves you $500 over the Pinarello comparably.

As thoroughly modern as the frame design is, the F12 can still be had with old-fashion brakes as used by Team Ineos. If only they knew! For many of us, the lower-tier Cannondales may be the only reality, as no frameset prices have been released yet.

The pinnacle of modern racing

High price for a Hi-Mod