REVAMPED AND STILL A WINNER 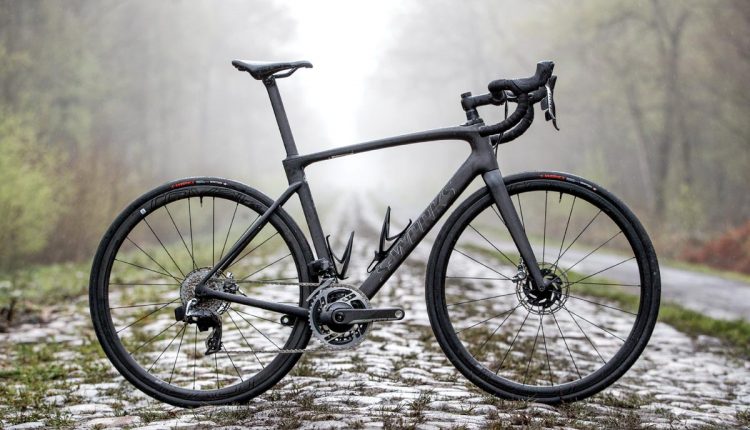 Early April is a busy time in the cycling industry, marking the peak of the Spring Classics, as well as the list of product launches ahead of the Sea Otter Classic. When an invite arrived from Specialized requesting we attend a launch in Belgium the same week as the Sea Otter, we knew why. With six victories at Paris-Roubaix aboard their Roubaix-branded bikes already in the history books, we figured it was time for a new bike modeled after the heralded cobbles.

Once we landed in Belgium we were rushed to a dinner table full of frites, with a replay of the Tour of Flanders from earlier in the day on the big screen overhead. Chris Yu, one of Specialized’s top engineers, greeted the room of journos as he went on to reveal a redesigned Roubaix that now had a hydraulically damped Future Shock
2.0.

Long one of their top-selling models, the Roubaix has come far since its 2004 inception that stood out with the unique “Zertz” elastomer inserts in the seatstays (and later in the fork) meant to damp road shock.

For the 2020 model year, the goal was to update the bike while keeping the frame weight lower than the Tarmac and keeping the frame more aerodynamic than the Venge. Of course, performance was key to the design of the carbon frame, with the 99.5cm wheelbase and 73.5-degree head angle helping the bike feel quick and responsive.

The carbon frame is available in eight sizes, and in relying on their vast database of Retul fit numbers, Specialized engineers determined that owing to only a minimal difference in general sizing between men’s and women’s frames that only a single run of frame sizes was necessary.

While the Roubaix is generally associated with a more upright riding position compared to the racier Tarmac, Specialized now offers an aggressive Team geometry version as used by their pro team riders that utilize the exact geometry of the Tarmac frame with the same Future Shock 2.0 compatibility.

To keep things aero, the top of the seat tube loses its round sides and is formed into a D-shape. Like the Venge and Tarmac, the Roubaix uses lowered seatstays to minimize drag.

The big news with the new Roubaix is that the 20mm of Future Shock travel is now adjustable. Thanks to a single-circuit hydraulic damper rather than a steel coil spring used previously, a headset cap knob can adjust the compression and rebound of the future shock. This gives the rider more control of their ride with the ability to run the system fully open or (close to) locked out.

Due to the shape of the knob, Specialized also developed the Future Stem. The stem compensates for a gap in the knob and creates a cleaner look in the overall aesthetic. The adjuster knob on two different bikes we rode both broke, and we were told a fix has been made.

To keep prices competitive, a modified Future Shock 1.5 that uses a non-damped spring like the original Future Shock will be found on the entry-level Comp ($3600) and Sport ($2800) models. Different spring tensions are available to personalize the damping.

The front end of the bike wasn’t the only piece updated to improve rough ride quality. Specialized also lowered the seat clamp wedge, which works in tandem with the carbon Pavè seatpost to allow more flex through the post above the clamp.

We’ve ridden the Roubaix with a Shimano Dura-Ace Di2 setup, as well as the latest SRAM Force eTap AXS gruppo. The Di2 and eTap groups used similar top-gear ratios with a 52/36 11-28 and a 46/33, 10-33, but the easiest gears of the Force added a significant amount of versatility. Both sets use hydraulic disc brakes with Centerlock rotors.

In an unplanned coincidence, we were able to ride the bike on both the cobbles of Belgium and the rock-strewn singletrack of the Belgian Waffle Ride in California (page 18).

Coated in a slick layer of rain, the flat farm roads of northern France proved to be the perfect testing ground for our first few rides. Our Shimano Dura-Ace Di2-equipped Roubaix was quick to wind up to speed. The frame was responsive, and we didn’t feel the need to adjust the Future Shock out of its closed position.

We hit the cobbles for the first time, and we’re unsure of the effectiveness of the new system. The jostling and sharp bumps were thoroughly shaking us like no other road condition we’ve ever encountered. But once we made it through the kilometer-long sector, we noticed we’d forgotten to twist the knob open. Oops. 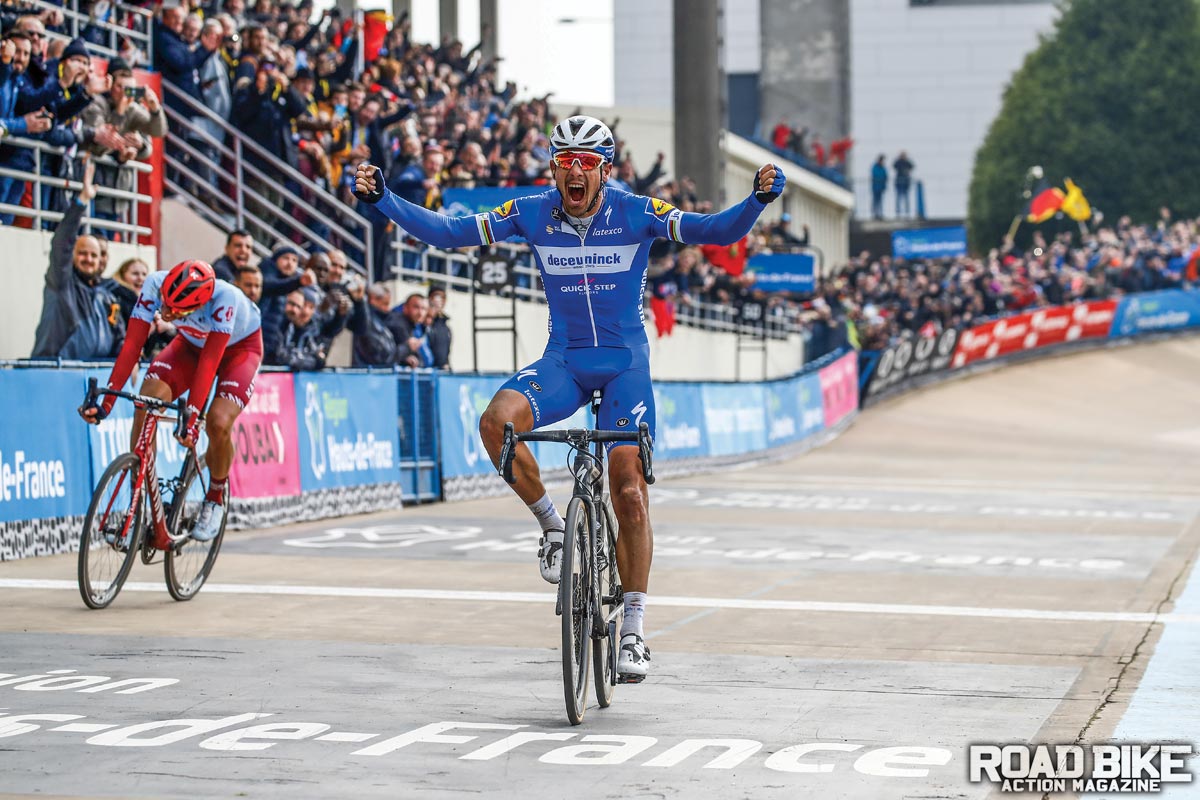 We headed towards the famed Arenberg Pavè next. Approaching the sector we twisted the cap to open the system. While the Arenberg is unlike any other sector in the area due to its large, spaced-out cobbles and minimal maintenance, switching the dial open made the ride noticeably smoother. With the added traction and control we were able to power over the cobbles and complete the sector much quicker and with much more ease than we anticipated.

Throughout the rest of the ride, we found ourselves toggling the Future Shock to meet the needs of the road. The adjustment allowed us to compensate for the quality of the road and improve traction, which made our efforts that much more efficient.

After saying au revoir to France, we requested a Roubaix Pro fitted with SRAM’s Force eTap AXS to tackle the multi-surface Belgian Waffle Ride. Unlike the flat “Hell of the North” cobbles, at the BWR we faced climbs upwards of 17 to 18 percent and not all of them were paved. Thanks to the 1:1 gear ratio, we were able to spin up all but the steepest of grades while seated. The extra gear range offered by the SRAM AXS groupset should not be overlooked, especially with the more affordable Force tier starting at $2078 for the 1x rim brake set.

Lighter and tested to be more aerodynamic, the 2020 Roubaix is more performance-oriented than ever before. For riding in extreme conditions, the Roubaix should be considered for those looking for a confidence-inspiring ride. The smooth ride quality will keep those that opt or are forced to ride rough roads feeling more comfortable longer, which means more time on the bike.

If you need some extra confidence in the Roubaix’s effectiveness, just check the final results from this year’s Hell of the North, where two of them making the podium and five in the top 10. In a sport where suffering usually determines performance, any advantage in comfort should be taken seriously.

Try it even if you aren’t conquering the cobbles