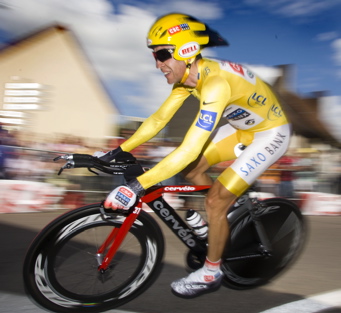 In a touching moment as he crossed the finsh line in Saint-Amand-Montron, Carlos Sastre saluted his late brother-in-law Jos Mar’a ‘El Chava’ Jimnez. Sastre’s strong time trial today clinched his 2008 Tour De France. Maillot Jaune Sastre crossed himself and sent a special salute to his late brother-in-law Jimnez, who tragically died in December 2003 of a drug overdose. Sastre and Jimnez are from the same town of El Barraco, near Avila and spent many hours training together on the local mountain roads

An emotional Sastre said after Stage 20, ‘Winning the Tour de France is a dream come true. Above all, it’s a special day for the whole CSC-Saxo Bank team. It was impossible to do this without them. It is extremely motivating to know that all the riders were ready to work for me. service. I suffered a lot in this time trial because I had to ride full gas and I slowed a bit in the final five kilometers. So I grateful because I knew that I was going to keep the Maillot Jaune jersey. It was to keep it but still I managed to do it. Now I’m happy because I have a guarantee that it will all end well tomorrow.’

Looking back on his journey, Sastre explained ‘I’ve prepared better than ever for this race. I arrived at the Tour in the best shape of my career and so what has happened is really a dream for every pro rider. I’m pleased to be a part of the history of the sport with this win. When I started today I wanted to do a good time trial but if I was able to defend my Maillot Jaune today it was for three reasons: my mind, my team, my form.’
Sastre acknowledged his final salute as he crossed the line, saying ‘At this very moment, I think of Jose Maria Jimenez, who is the person who I miss the most.’ 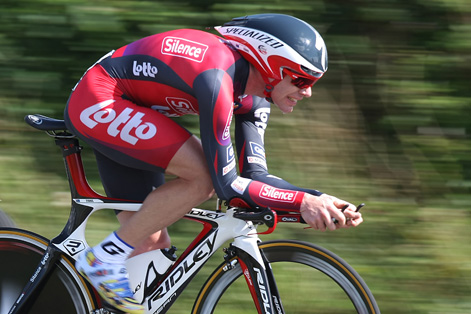 Athough he was the favorite for the 2008 Tour De France, Cadel Evans and his Silence-Lotto team could not overcome the domination of Sastre’s CSC-Saxo Bank team this year. Evans’ team manager Marc Sergeant admitted he was surprised by the dominance of Sastre, whose climbing skills had allowed him to take the Maillot Jaune winning the stage to L’Alpe d’Huez. “We expected a really tight battle and it didn’t turn out like that,” said Sergeant.  “I saw right away that he wasn’t at ease on the bike today.” At the end of the stage Evans was stunned to see his mother, Helen Cocks, who arrived from Australia on Saturday morning in the hope of seeing her son finish the day in the Maillot Jaune. But it was another surprise, from Sastre, that capped Evans’ penultimate stage of the race. Asked if he was devastated, Evans replied: “No, not devastated. Just disappointed. I felt like I rode a good time trial. I had a good day, a good start, the first time check I got after six kilometres I was doing the same time as Cancellara, for me was a really really good indication.”

But Evans admitted he was surprised by Sastre’s effort, but admitted he had been beaten throughout the race by the far stronger CSC team. “Sastre’s ride in the time trial today was a real surprise.” Evans added: “It comes down also to the fact that (CSC) have two, two and a half times the budget we do, and straight away that can buy much better quality riders,” added the Aussie, who for much of the race was left to fight for himself.

In a dominant performance today, Gerolsteiner’s Stefen Schumacher took his second time trial stage win at the Tour De France. Schumacher explained ‘I really happy about the win today; I came to Tour to do well in the TT’s and I did. From the beginning of the stage, I was not too fast and not to slow and had a good rhythm. The course was perfect for me; up and down with a lot of wind so for me it was a good race today>

Schumacher continued, saying ‘In the final part of the Tour, after such a long time trial, you find yourself almost cross-eyed from the effort. I didn’t know anything about my time when I hit the finish line so I had to ask, ?Which place?’ And I heard first and as I’d already beaten the time of [Fabian] Cancellara I knew I had a good chance to win. But I never even thought I was going to win. It wasn’t even in my mind. I only tried to find my rhythm and give it 100 percent. After 25 kilometers my radio was no longer working; I don’t know what happened, maybe I hit the wrong button but I didn’t hear anything, but I had the time at the second check and I still wasn’t sure if it was enough to win the stage.

‘I was sure that the last climb on the course would decide the winner. And I was feeling heavy after 45 kilometers and to come to the last climb, which is more than 1km long like that was hard, but I had the power to go over the top. In the last 10 kilometers I had a good ride and that was very important for me.’

Schumacher elaborated on Gerolsteiner’s Tour, saying ‘I don’t think anybody outside of the team thought that (Gerolsteiner) could have a Tour like this, so it’s unreal. I’ve been talking a lot with Bernhard [Kohl] and we’re always saying, ?Hey, this isn’t just any bike race. It’s the Tour!’ And I cannot believe what we’ve done. He said that he’d be happy with fifth and now he’s third and the King of the Mountains? so it’s been an incredible adventure.’

Runner-up today to Schumacher, CSC-Saxo Bank’s World TT champ Fabian Cancellara was philosophical, saying ‘ I’m still tired from all the work I did at this Tour, and today, I went as hard as I could but Schmacher was really strong at the end. I was really hoping that Carlos could maintain the Maillot Jaune that’s already my win, our win.’

How It Happened
On a humid Saturday where rain had fallen in the morning, 145 riders contested Stage 20th of the 2008 Tour de France, a 53km individual time trial from Cerilly to St-Amand-Montrond. Riders were separated by two-minute intervals, with the final 20 riders separated by three-minute intervals. The weather cleared as the day went on, with the northwest head and side wind increasing throughout the day.

Lanterne Rouge Bernhard Eisel started at at 11.18am, it had stopped and the roads started to dry up. Vansevenant (SIL) was next to last on GC after 19 stages but the Belgian then finished 1’25’ behind Eisel to reclaim his place as the ?Lanterne Rouge’ of the 95th Tour de France: Vansevenant is now destined to become the first rider in history to finish in last place in three Tours de France (2006, 2007 and 2008).

Next. Vansevenant’s team-mate, Leif Hoste (SIL) posted the fastest times at each intermediate check. The Belgian time trial champion is used by his team to get a gauge of the course and offer advice to his leader Cadel Evans. Hoste’s times were: 22’28’ at 18km, 45’16’ at 36km, 1h01’33’ at 47.5km and 1h07’40’ at the finish. Danny Pate (TSL) was the next rider to post the fastest time, 56′ quicker than Hoste, but next up, World Champion Cancellara blasted home with a fast time, 1h04’11”, which looked like the winning time.

But it was not to be, for Schumacher was on a fabulous day and beat the World Champion by 21′, riding 53km in 1h03’50” at an average speed of 49.817km/hr for the only time of the day under 1h4′. Cadel Evans didn’t have a great day on Stage 20 and finished the stage in 7th, but still moved up to second overall, 1’05’ behind Maillot Jaune Sastre. The Spaniard was 12th in the stage 2’34’ behind Schumacher and 29′ behind Evans. The leader of the CSC-Saxo Bank team will wear the yellow jersey for the final stage of the 95th Tour de France and hold a lead of 1’05’ over the leader of the Silence-Lotto squad. CSC-Saxo Bank will be the best team at the 2008 Tour, while Sastre’s young teammate Andy Schleck is 12th on gc and will win the Maillot Blanc of Best Young Rider. 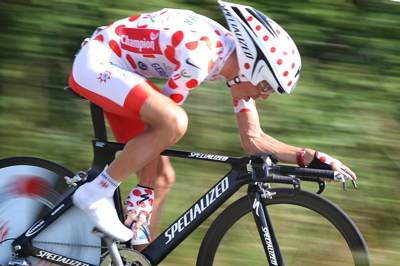 Maillot Pois Bernie Kohl (Gerolsteiner) had a surprisingly good time trial on Stage 20 to end up 9th on the stage and thus secure the ungainly yet determined Austrian 3rd place at the Tour De France, the first time in 51 years an Austrian rider has visited the Tour De France podium. 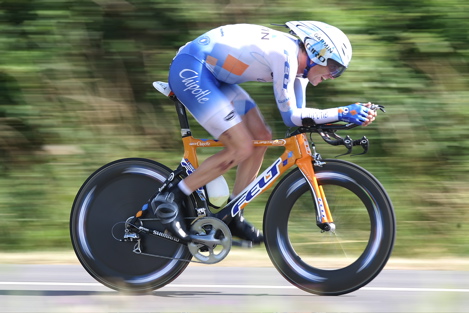 Photo Roberto Bettini: The Vandeman Can!

Garmin’s Christian Vandevelde had an excellent result today to finish in 4th place on the stage and move up one place on gc to 5th overall,  3’12” behind Sastre. But what must Vandevelde think of the 2’36’ he lost to Kohl and the other gc riders from his crash in the finale of Stage 16? Without that one moment of bad luck, Vandevelde would likely be on the podium in Paris tomorrow. And the future is now; with great young riders like Andy Schleck, Roman Kreuziger and Vincenzo Nibali all in the top 20, look out for them to battle in upcoming Tours De France.

Sunday 27 July
Stage 21: tampes?Paris Champs-lyses-143 km
The fat lady finally sings on this final stage into Paris along a hilly course winding through the Chevreuse Valley southwest of the French capital before the traditional criterium along the Champs-Elyses, la Place de la Concorde and the rue de Rivoli. Sprinters will battle attacking riders on the final 80km circuits in Paris, then finally the coronation of the winner of the 95th edition of the Tour de France.