BMC says yes with the latest incarnation of the Roadmachine 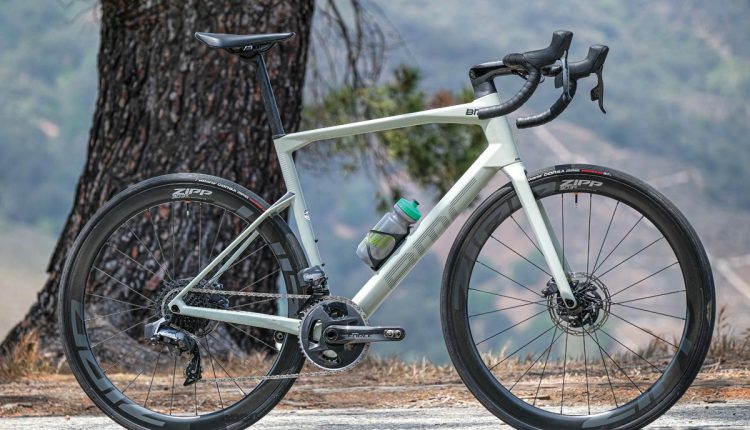 Innovation has never been a design element lacking in the BMC catalog, as the Swiss brand has led the march in road bike innovation for years. From their signature lowered seat stay design to focusing on frame compliance when stiffness was still a leading design principle across the industry, BMC has long looked to design bikes that roll between ProTour performance gains and real-world ride quality.

Our first thoughts on the original 2017 Roadmachine we tested stated that BMC designed an “all-new line of endurance road bikes centered around the notion of who and what a ‘gran fondo’ rider is, which in short means the non-racer type who simply enjoys riding a high-performance bike for as long as they want to, like all of us.”

Not much has changed on the Roadmachine frame since we last rode it in 2019 (RBA, October 2019). Most of the small updates from the 2020 model. Like the recessed headset bearings, which allow for a taller 18.1cm head tube, and the rectangular carbon steerer, which hide the hydraulic brake lines internally, alongside the headset spacers from the base of the stem—to maintain the aesthetic of a modern, cable-free endurance road bike are continued in the latest model. 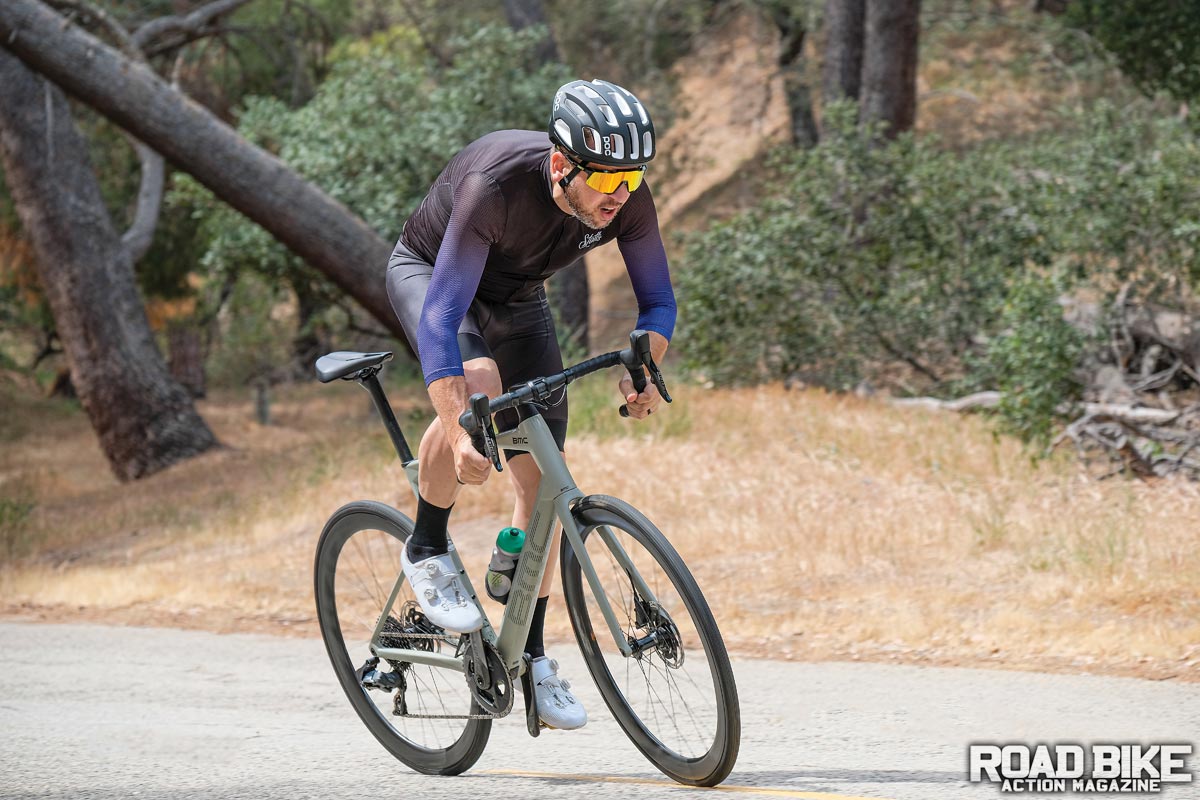 BMC engineered compliance into the frame to reduce vibrations with their Tuned Compliance Concept design. Tuning is specific to the frame type, and the Roadmachine receives the most compliant and flexible endurance-oriented characteristics in BMC’s catalog. Most of this is achieved by the carbon layup and shaping of the lowered seat stays. The seat stays also provide an aerodynamic advantage over traditional stay designs that join at the top tube.

The wheelbase is 100.8cm with 41cm chainstays for a sporty endurance experience. The longer wheelbase provides stability at speed, while the mid-sized chainstays keep the rear end responsive. A 58.6cm stack and 39cm reach boost the rider up, which gives the cockpit a high feel.

BMC spec’d SRAM’s wireless Force AXS drivetrain with a 46/33 chainring paired with a 10-36 cassette. We had our trepidations on how the Roadmachine’s top speed would be affected by the small chainring. It had been a while since we rode the combo, but were pleasantly reminded the gearing behaves similarly to compact 50/34 chainrings with an 11-tooth cassette. Unlike the near-universal 160mm front/140mm rear rotor spec, BMC runs the smaller rotors front and rear with flat-mount calipers and proprietary adapters.

For 2021, the most noticeable parts swaps are the Zipp 303 S wheels, Vittoria tires and Fizik saddle. Notably, the max tire pressure stamped on the tubeless-ready 303s rims is 73 psi. Instead of a Fizik Aliante R5, BMC opted for the increasingly popular snub-nose Fizik Argo.

Like other BMCs, the stock stem is a pain to work on due to the silly rear-facing bolts. Maintenance is best left to the bike shop, as small tweaks require more time than usual. But, we found little reason to adjust the stem after the initial setup.

Thankfully, the price has remained the same over the last year, which is a sign of good faith from the Swiss brand. BMC offers builds of the 01 frame, ranging from $6999 with Shimano Ultegra Di2 to $10,999 with SRAM Red AXS. Alongside the top-tier 01 builds are the standard Roadmachine frames with a lower grade of carbon fiber. Starting at $2999, riders can get a Shimano 105 build with the same tube shaping and the biggest offset being a couple hundred grams of frame weight.

Most of our riding consisted of a month’s worth of the hilly, winding roads through Griffith Park, our local high-speed evening group ride at the Rose Bowl, as well as the world-famous Saturday Montrose ride. The cracked and bumpy roads of the park contrast the relatively smooth three-mile loop at the Bowl, which make for fairly well-rounded testing grounds.  Saturday’s Montrose ride is a mix of both and acts as our usual endurance ride of the week, which usually tops out around 90 miles.

“We topped 36 mph during hard efforts at 110 rpm, which is more than enough even for the high speeds of the Rose Bowl ride.”

Being an endurance machine doesn’t mean it’s under-gunned in the performance category. The Roadmachine proved itself on the hill-climbs in the park. Instead of a dull, monotonous ride that clouds the general idea of what an endurance road bike is. Power transfer is responsive as the bike replies to inputs in an appropriate manner. In the saddle, the bike provides a noticeably supple ride, especially on the descents. The large contact patch of the 28mm tires help keep the road feedback at bay, while providing predictable cornering.

Once we got acclimated with its tall front end, over at the Rose Bowl, the Roadmachine felt more like a Teammachine. The smooth, planted ride allows for more awareness of the surrounding conditions rather than total concentration on keeping the bike upright and on the right line. The benefit of a smoother ride and less head rattle make it a worthy upgrade for anyone with rim brakes that has questioned the efficacy of thru-axles and wider
tire clearance.

We topped 36 mph during hard efforts at 110 rpm, which is more than enough even for the high speeds of the Rose Bowl ride. Climbing is where the easy gear catapults SRAM onto the top step in terms of the range offered by modern drivetrains. The 33-36 gear allows for spinning up challenging grades at a more comfortable cadence, and we mostly rode in the big chainring, thanks to the massive range in the rear cassette.

Hours into a ride is where the extent of the range is the most crucial. Tired legs can rely on the easy offering towards the top of the SRAM cassette. But, we found ourselves fresher than usual further into rides, thanks to the overall forgiving nature of the Roadmachine. 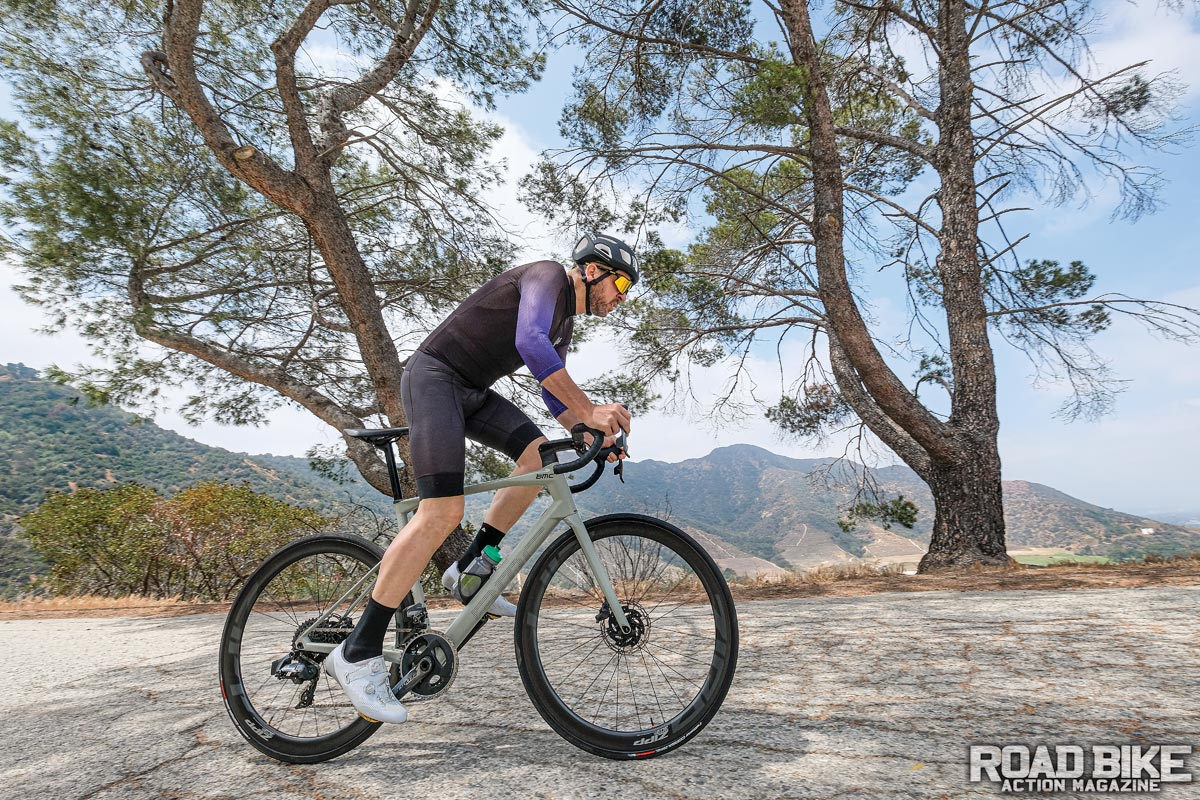 While the one bike to do-it-all argument is generally reserved for gravel bikes, it, too, can be made for the Roadmachine. The Roadmachine 01 rides like a performance bike, is geared for nearly any road and holds its own across a wide swath of terrain. Some beefy 32mm tires or wider to push the limits of the recommended 33mm max tire clearance will up the overall capabilities of the BMC.

The Roadmachine 01 is priced to match its premium ride quality. However, the same technology is offered in the standard version listed at less than half the price.

BMC has surpassed the standard of what a modern endurance road bike is with the Roadmachine 01. Little was needed to be changed since the last frame updates in 2019, and the updates to the wheels, saddle and tires keep it at the forefront of the endurance road bike market.