A racing pedigree reaches for the masses 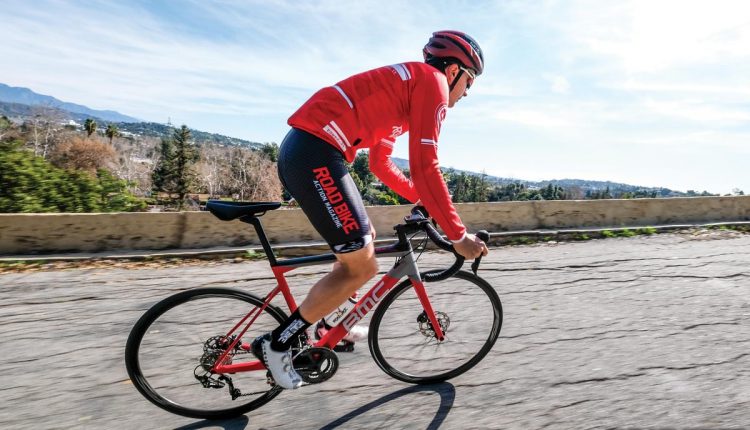 BMC is known for their innovative frame designs that are put to the test in the WorldTour year to year. The Teammachine has been their flagship race bike since Cadel Evans rode it to victory in the 2011 Tour de France. Since then the Swiss-based, engineering-focused brand has mated the modern amenities to the
race-proven Teammachine.

Scanning the Teammachine from top to bottom, the simple white BMC logo glistens on the downtube, contrasting the mute gray and sharp red colorway, but the Teammachine has much more to offer under its paint. A performance-oriented geometry with a focus on compliance is what makes the Teammachine tick. Originally designed to conquer the unrelenting climbs in the WorldTour, the Teammachine has now transitioned from a featherweight to become BMC’s all-around road bike without gaining much weight. The top-of-the-line SLR01 hits the scales at a claimed 15.56 pounds.

BMC has grandfathered the same technology from the WorldTour-level bike into a more affordable, four-model range dubbed the SLR02, in which the Disc One is the highest-end build and the Four is the most affordable. They feature the same frame design and geometry, with the main difference coming in the form of a lower-grade carbon used for the SLR02 frameset, which does add some weight.

Design-wise, BMCs have long stood out with their signature dropped seatstays. Lately, the design can be seen from nearly every other major brand. As more manufacturers have begun to see the benefits of a smooth ride on imperfect roads, the increased compliance and aerodynamics dropped stays offer have become mainstream. However, the widespread swap to drop stays only affirms the designs BMC has developed for over a decade.

BMC incorporates the Teammachine’s seatstays, fork and seatpost with their Tuned Compliance Concept (TCC). The TCC was created with the goal of damping the cobbles of the Spring Classics. It aims to achieve a balance of compliance and stiffness for increased performance on rough roads. While most of us will never need cobble-conquering compliance, TCC technology is most useful at smothering out vibrations, which can leave legs
fresher longer. 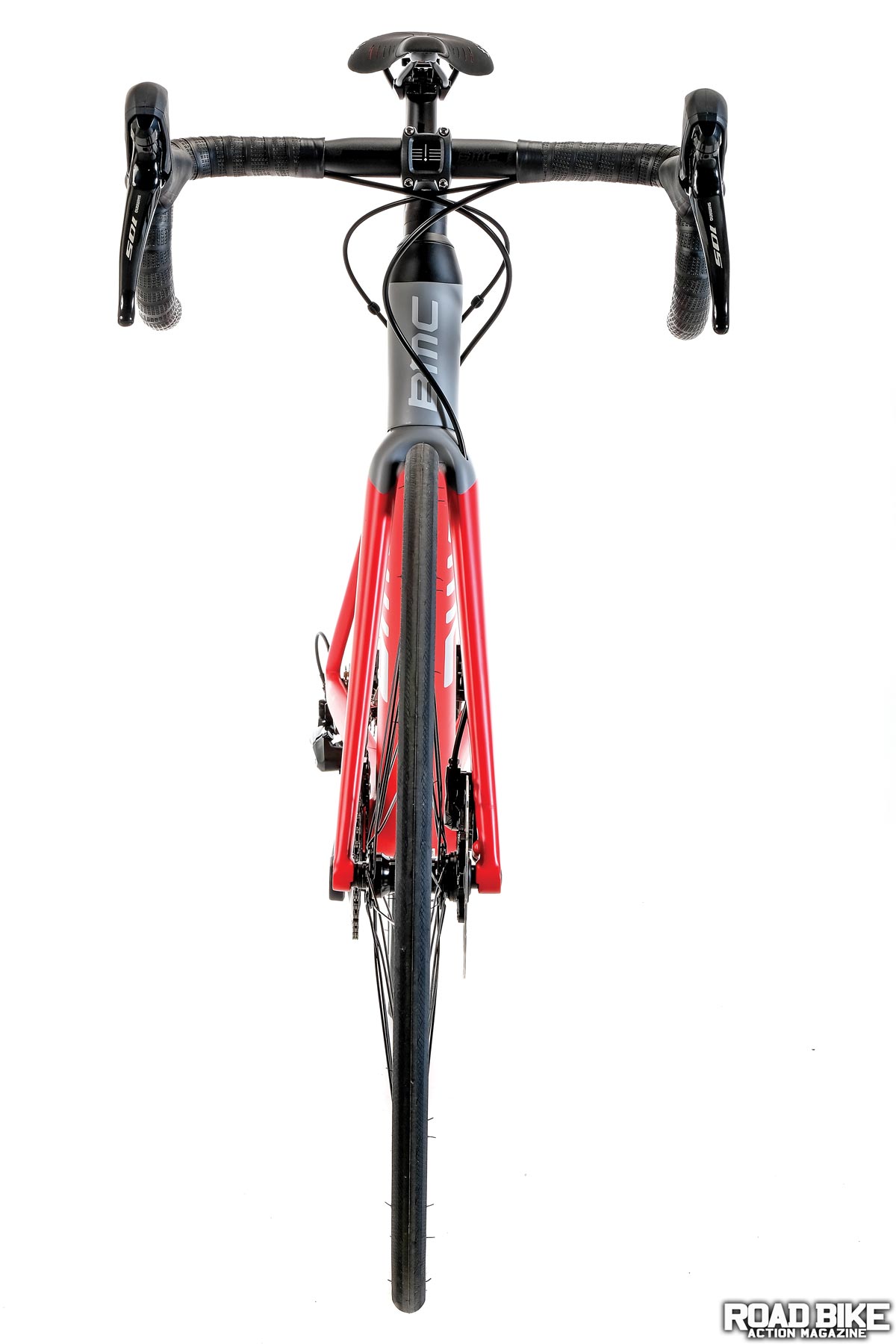 The Teammachine implements this with its thin asymmetric fork blades. They allow for an intermediate amount of vertical flex to absorb road chatter while remaining stiff to enable quick accelerations. It’s D-shaped seatpost with a 15mm offset disperses vibrations as they travel through the post as well.

In our opinion, the biggest parts upgrade to the Teammachine since its last Tour de France overall victory is the addition of disc brakes. While BMC still manufactures a rim brake version, the WorldTour NTT Pro team has wisely moved on to the SLR disc brake model. Our SLR02 Disc Four is equipped with Shimano 105 hydraulic disc brakes.

A Shimano 105 mechanical drivetrain is spec’d with compact, 50/34 chainrings and an 11-speed 11-32 cassette. The combo makes the bike friendly for the average cyclist on climbs, but lacks the gears for fast-group-ride top-end speeds. The Shimano 105 shifters are enlarged to accommodate the hydraulic wells, which add to the overall bar reach.

“The same technology that has propelled their pro riders to victory has been grandfathered down into bikes that are more affordably spec’d and within closer reach of everyday cycling enthusiasts.”

Shimano takes care of the wheels as well. A set of alloy RS-170 rims and hubs are laced together by 28 J-bend alloy spokes. The rims measure at an outdated 17mm internal rim width and Shimano recommends running no thinner than a 25mm tire with a claim that they can accommodate up to 38mm of rubber. Unfortunately, the Teammachine’s maximum recommended tire clearance is only 28mm. BMC spec’d the wheels with a pair of 25mm Vittoria Rubino tires and Center-Lock Shimano Ice Tech rotors.

An alloy BMC cockpit is comprised of a 110mm stem and a 42cm handlebar. Unlike the high-end SLR01 build, the shift cables and hydraulic lines are visible from the edge of the bar tape to the internal routing ports on the downtube and fork. 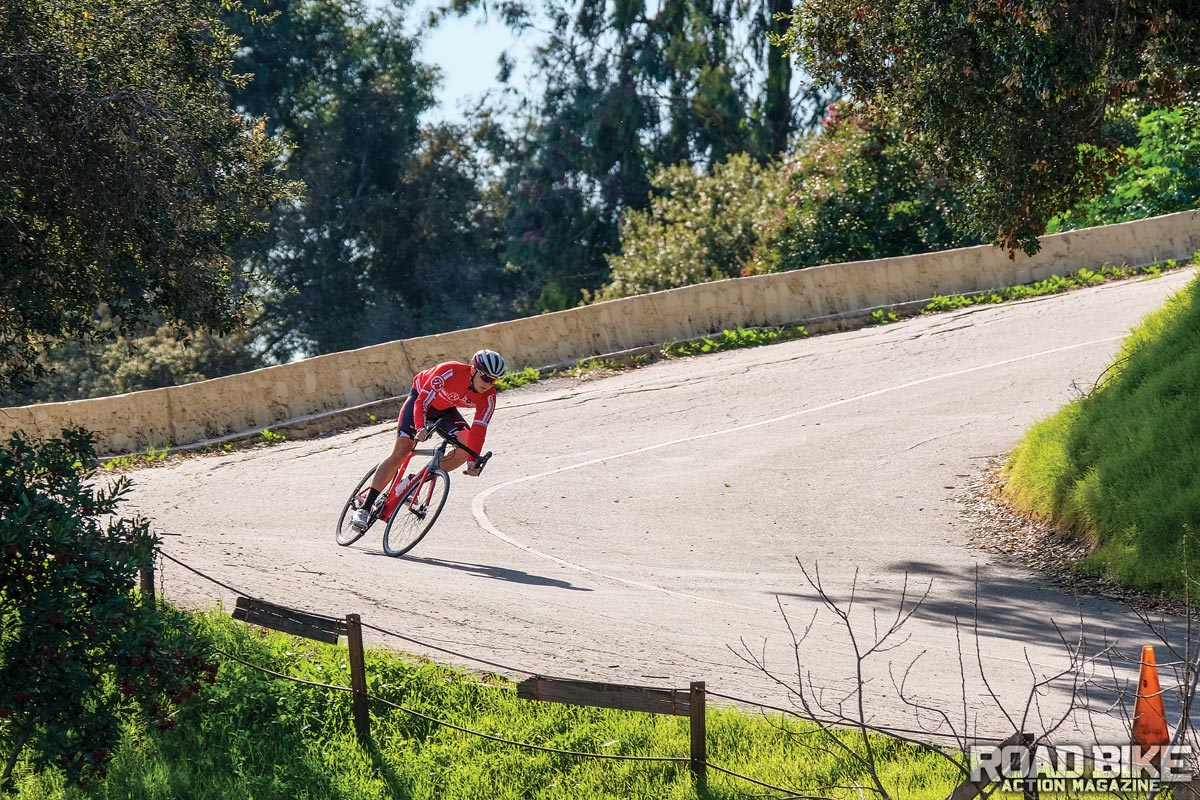 First off, we ran our tire pressure around 85 psi against Vittoria’s recommended 100–130 psi labeled on the sidewall. Clipped in, the enhanced compliance of the Teammachine is immediately noticeable.

The TCC technology was the handiest on a section of road that had its asphalt removed as it was about to be repaved. Rolling through what was essentially mini-pavé, the Teammachine provided a relatively smooth ride, and the Shimano RS-170 wheels were durable enough to bounce from pothole to pothole. Its compliance checks the boxes for what we would expect from a bike we would ride in a mixed-surface event like the Belgian
Waffle Ride.

On the climbs, we appreciated the compact gearing the most. The wide downtube and bottom bracket area assisted in efficient power transfer during in-the-saddle and out-of-the-saddle efforts. We would opt for stiffer wheels to maximize performance, as the Shimano RS-170 tended to flex more than we like.

Descending and cornering, the Teammachine is planted and stable. The disc brakes and thru-axles allow riders to brake later and rail corners predictably. The stable ride may be mistaken as a slow ride, but this isn’t the case. The Teammachine goes where the rider is looking, just without the excess road chatter that plagues many rim-braked bikes with quick releases.

With multiple Grand Tour and world titles to its name, BMC is no stranger to racing success. And for anyone who thinks that racing doesn’t improve the breed, this bike is proof otherwise. The same technology that has propelled their pro riders to victory has been grandfathered down into bikes that are more affordably spec’d and
within closer reach of everyday cycling enthusiasts.

BMC’s Teammachine SLR02 Disc Four is a modern performance road bike that, with a couple of upgrades, can compare with much higher-costing pro-level bikes. The smooth ride quality is a hallmark of the Swiss brand that
has also become mainstream in the road scene. Driven to compete from day one, BMC has been at the forefront
of frame design and continues to adapt to the changing road bike market.

• Could use a wheel upgrade

Strava’s Latest Update: What’s New? How to Favorite an Athlete and Use Chronological Feed Ordering