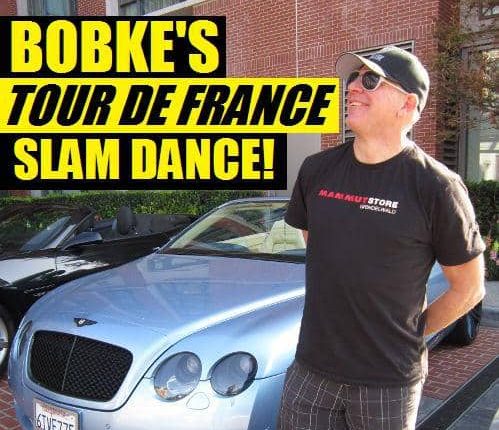 This is my motto from the Tour: If you’re authentic, the efforts are worthwhile.  How many times do we have to see these riders dig so deep and ride through pain and mishap for the chance to attain some eternal glory?  Everything about the Tour provides us with an allegory that gives meaning to our struggles in life?this sport is so compelling.  For three weeks solid the riders endure the various pitfalls thrown at them in hopes that they may have a greater reward elsewhere. Is that any different than most us who show up at work at every day?  Like life itself, the Tour is something that needs to be endured ? I love it!

The Yellow Jersey is like time itself ? it can never be conquered. It’s a beast that mankind can never kill.

I never would’ve picked Rumunas to win a stage, but it’s like we talked about yesterday, it’s all about inspiration. He beat the odds ? I mean how often is a 100:1 longshot proven to be a winner?! Ask Blel Kadri. Heading into this Tour I bet there wasn’t anyone that gave him more than a zero percent chance of winning a stage. The Belgian bookies gave Alexander Kristoff 50:1 odds and he went and won two stages. What does it all prove? That with enough inspiration the underdog has a chance to come out on top. How sweet is that?

The thing that is amazing about this Tour is the degree that the guys just don’t seem to get a break. On paper, today’s stage looked like an easy 200k jaunt in the sun with no big hills right? Suddenly it’s like an apocalyptic rain! There’s no other sport that athletes carry on no matter how much the chips are down. Cycling delivers the good like no other sport.

Despite how ancient, inexplicable and absolutely bizarre as cycling is, cycling and the Tour de France will live on and how lucky are we to be part of it?

Vincenzo Nibali didn’t have to demolish the field, but he wanted to, He raced with his heart, not his head. He couldn’t stop himself from attacking. I mean the dude had a seven minute lead and he rode as if it was just seven seconds! If you drew the same scenario in a football game, the coach would be resting the quarterback on the bench, but that’s not how it plays out in cycling and for that rest of the sporting world should tip their hat to cycling.

The randomness of the open road is always capable of knocking out any advantage a rider has in a blink of an eye and as an announcer, and a fan, that’s what keeps me on the edge of my seat year after year.  When the Tour delivers like it did today it gives hope to humanity?and there aren’t many places in the world where you can find that.
Bob Roll