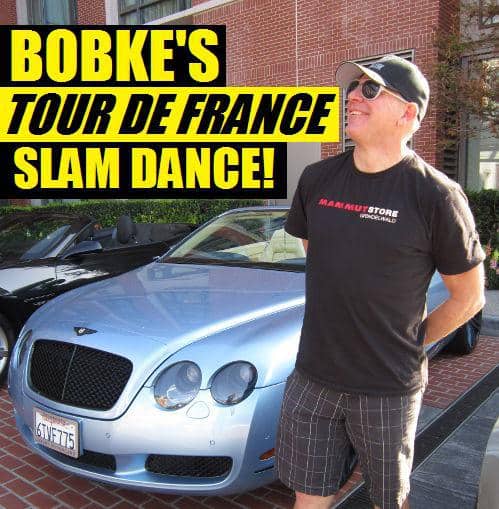 ‘Unfortunately, has we came to cross the English Channel and electrical malfunction in the Chunnel has predisposed to take a ferry from Dover to Calais ? a less than great end to an otherwise great day of racing in the UK. With the Chunnel closed down, that means the other avenues of escape are that are already wedged are over 50% worse off!

So, how about the response of England to the Tour de France? They say five million people had their eyes on the race ? you have to figure that with those kind of numbers in just the first three days, it’s a big win for cycling. I mean, if even a fraction of that many people come away enthused enough about cycling to go out, buy a  bike and start riding, how much better of is the sport because of that?  That is a huge growth potential.

Unfortunately, it’s not like that in France.  I think the host country has lost the plot and so much of it comes down to a country feeling like they have a chance to win ? and that’s definitely not the French! The people’s potential to share in a victory is a big incentive for them to the turn on the TV or to come out on the side of the road to cheer the riders on. And in that respect, France doesn’t measure up to the Brits, Belgies, Italians or Spaniards.

And just seeing Kittel in such fine form today was a thing of beauty.  This was definitely a stage finish that was made for the big German. Sure he beat Sagan handily, but that was never the kind of finish sprint that Sagan would come on top versus a power sprinter like Kittel. Peter Sagan is an amazing bike rider. He wins when handling skills take precedence over sheer muscle mass. Sagan wins when there’s a climb at the finish, if it’s twisty or wet.  Sagan is as strong as anyone, he has the ability to stay with the leaders over more of a stage than any of his fellow sprinters who usually get dropped on the first climb ? stage two,  where Kittel got dropped and lost the jersey  while Sagan finished fourth, was a good example of that.

Why was Roche and Contador working so hard at the finish? Well, it’s simple and really comes down to a single word ? safety. There are many strange reasons to explain the rhyme of the sprinters, and for the two of them, it came down to playing it safe by going that much harder. It’s kind of counter-intuitive, but that’s really the way to ride to win the Tour de France these days.  If you’re a GC guy, staying out of trouble is the number one rule to play by. Look at ‘Purito’ Rodriguez, that guy was soft-pedaling in the back row, he doesn’t care about being up front because obviously he harbors no GC consideration.

So tomorrow when we get back in France, it will be another stage for the sprinters. But stage 5, oh, stage 5?some people will have lost their Tour after Wednesday.
Bob Roll