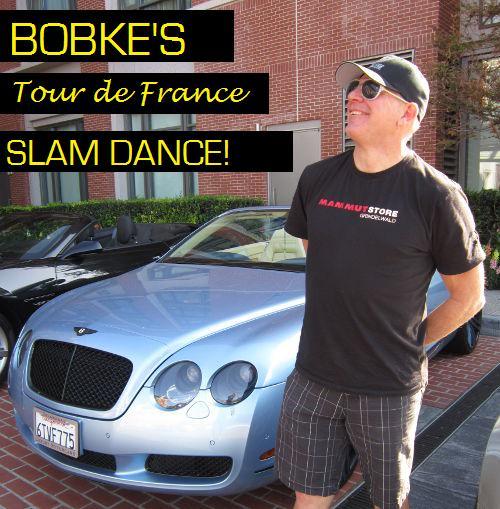 TO COBBLE OR NOT TO COBBLE?
“Without a doubt there should be a cobble section in every Tour, maybe even two. Okay, how about in 2 out of every three Tour? Those cobble sections conjure up such powerful images and look how exiting the Tour became because of that. Usually, the first week of the Tour de France is the same old sleepy cakewalk – not this year. The riders were visibly rattled, but I bet everyone of them will be looking back some day and telling the tale of their stage 5 exploits for years to come…what does that tell you?

And everyone knows that the worst carnage in the stage occurred before the riders even got to first cobble section. Without the rain it would’ve just been a great stage, but the water definitely upped the drama and in the end it was a different type of athlete who took the day. Just as there are days for sprinters and climbers, why not have a day where guys like Lars Boon can excel? You think the Belkin team wasn’t looking forward to the cobbles?! I mean, what kind of person would want to see a win like that taken away? Lars was beside himself knowing what he had accomplished – he’d become part of the Tour lore that he normally wouldn’t have figured in.

THE GRAND NIBBLES
What a great performance he put on over the cobbles…I bet there’s not a single person that could honestly say that they saw that coming. Nibali attacked one section of cobbles after another and by the sixth or seventh section he’d laid his program out for all to see and the time gap he was working so hard for was the result. Vincenzo’s ride was a thing of pure panache. After the race Eddy Merckx said he’d wished he’d had a race like that in his career – what does that tell you about how well Nibali rode?

“Chris Froome is made out of balsa wood, but Peter Sagan  is made from rubber – he bounces back!”

TEAM SKY’S BAD BEHAVIOR
“I’m not a fan of how team Sky painted Richie Porte into a corner basically just to cover for Froome’s fragility and the team management’s poor decision making. For the sake of an maintaining an obvious propaganda trajectory, I find team Sky’s behavior reprehensible. What if Porte doesn’t succeed? It just a a cheap way to avoid being responsible for making the decision to keep Wiggins off the team. Why don’t they just admit that they made a bad decision and didn’t have a good contingency plan to losing Froome? If you really care about Porte’s career, you don’t just load him with the responsibility of now winning the Tour and being the team leader.

Instead they should’ve just phoned up all the sponsors, admit that they screwed up and announced that instead of still trying to win the race that they’d instead fight for stage wins. If you want Porte to be the guy to win the Tour de France, fine, but at this stage you do it in a humane way and make it the 2015 Tour de France and build a team around him. I get irritated with Sky because too often the message is more important than the substance of the team.