When industry vet Daniel Large finally opened his own shop 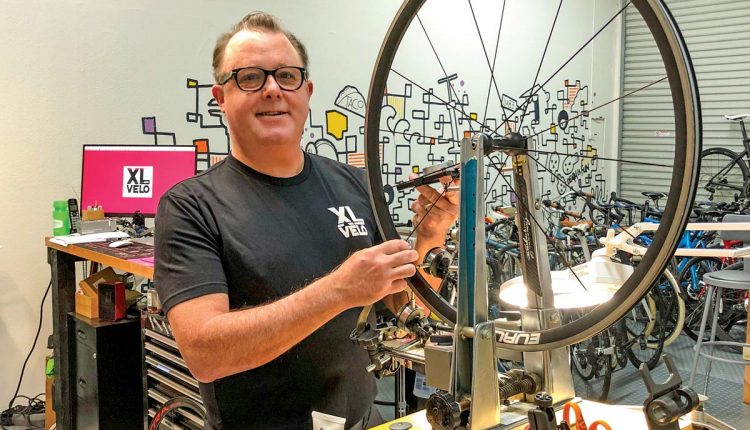 As his name implies, Daniel Large is indeed large. Large in personality, charm and, most impressive of all, bike knowledge. After serving key functions in the bike industry for over three decades, last year he finally decided to settle down and open his own bike shop. XL Velo is but a small, 800-square-foot shop located in San Diego that is huge in firsthand bike-building abilities.

RBA: How did you get started in cycling?

Daniel Large: The usual story of wanting a Schwinn Stingray back in the ’70s and having to go work for it. I swept floors in a couple of old defunct shops until I got enough money squirreled away to finally get that bike. Then I got hooked on road bikes due to the proximity from working in those shops. I ended up getting my first mountain bike in 1986, and the rest is history.

DL: When I got out of the navy in ’91, I moved to Mammoth Lakes and got a job wrenching in a local bike shop. Those were the golden years of mountain bike design with lots of stinkers and a lot of gems. I moved back to San Diego and started wrenching in several shops over the years until I landed at Alan Goldsmith’s Super-Go as the service manager of a very large shop. From there I worked for Spinergy as the head wheel builder and instructor for the wheel-building crew there. Next, I managed Adams Avenue Bikes in San Diego while at the same time driving and jumping from a moto for Mavic neutral support in the North American tours. I left Adams Avenue to take up the position of technical manager at Campagnolo. Every road geek’s dream job in my opinion! I stayed there for 12 years before leaving to work as a race mechanic for teams such as Aevolo at the Tour of Utah and the LUX junior development team. Last year I opened the franchise for Volvo Cycling Support/NRS and Events Southern California region, which was going great until COVID-19 happened.

RBA: What is it about Euro brands and designs that make them special?

DL: To me, it’s the handmade attention to detail that European craft folk put into their art—be it the design of a gorgeous motorcycle or the perfect precision of a hub mechanism. 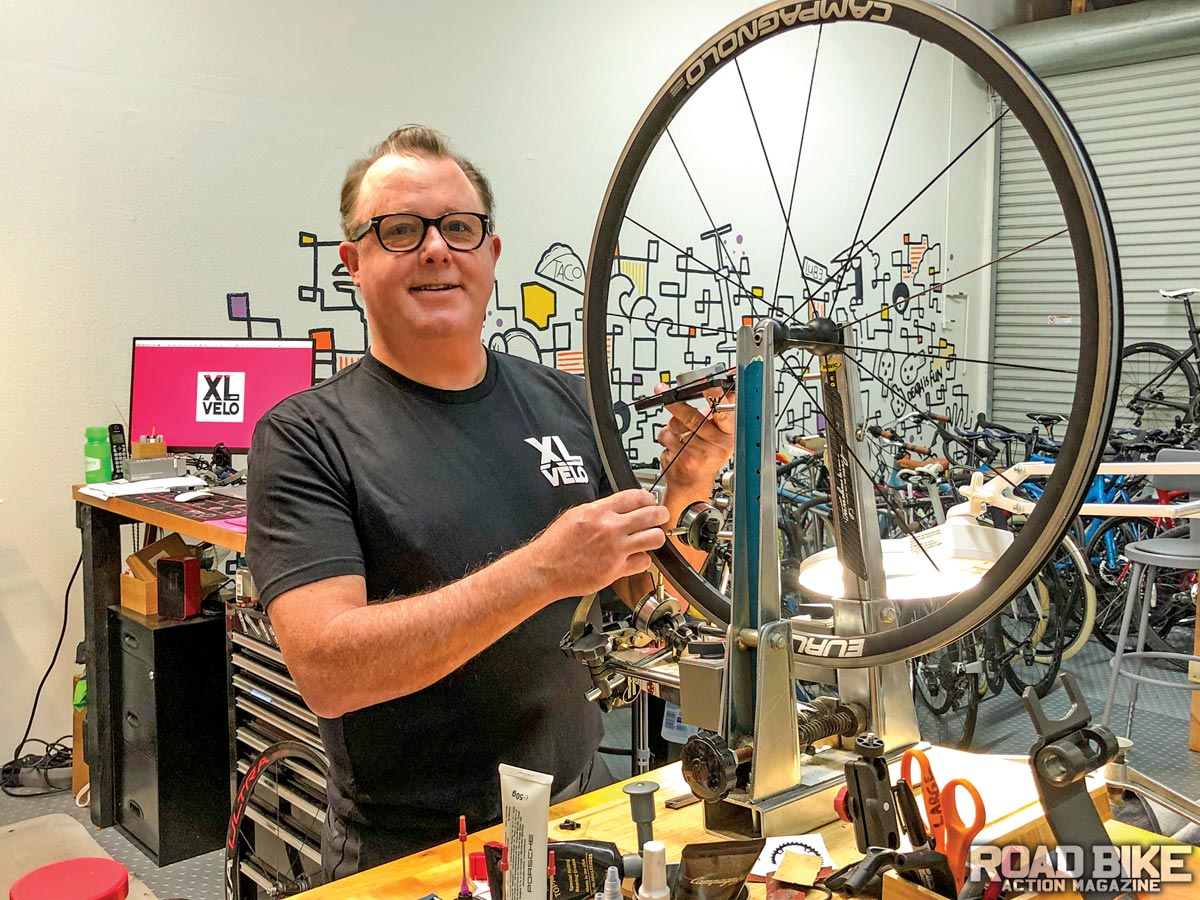 DL: It’s always great when a rider you serviced wins the race. There are so many memories of crazy times during races that the public never gets to see. One that stands out is covering George Hincapie on Moto 2 in the Tour of California descending Mt. Hamilton. Just imagine two 200-pound dudes on an 80-horsepower motorbike trying to keep up with him; it was nuts! He is an amazing descender.

DL: The Marzocchi Z1 Bomber. Campagnolo bearings are simply the best ever, and the new Shimano front derailleurs are pretty awesome as well!

DL: On the road it’s Stephen Roche, and on mountain bikes it’s our friend Missy Giove.

RBA: What was the mission statement for the bike shop?

DL: To give personalized one-on-one Savile Row service for each customer no matter what their needs might be.

RBA: What about the big-box stores in the neighborhood?

DL: They’re going to do what they do best while I need to focus on what I do best—building bikes. The only way for small shops to compete is by offering better customer service and, to be honest, a better result when you work on the bike. Not to be critical, but a lot of the factory concept stores hire people who can assemble a bike versus someone who can actually build a bike. I’m a one-man operation and, unlike the big stores, I can’t indulge a shot-gun approach fixing kids’ bikes and flat tires.

“What’s important for me when I build a bike is that it all works together. For me, it’s what the cyclist feels when they look at their bike and how they feel when they ride it that counts most.”

RBA: Your most consistent misgivings about home mechanics?

DL: The misunderstanding that modern bicycles are simple to work on and thus causing much more problems for themselves, including safety issues not only for their own selves but for the other people riding around them. 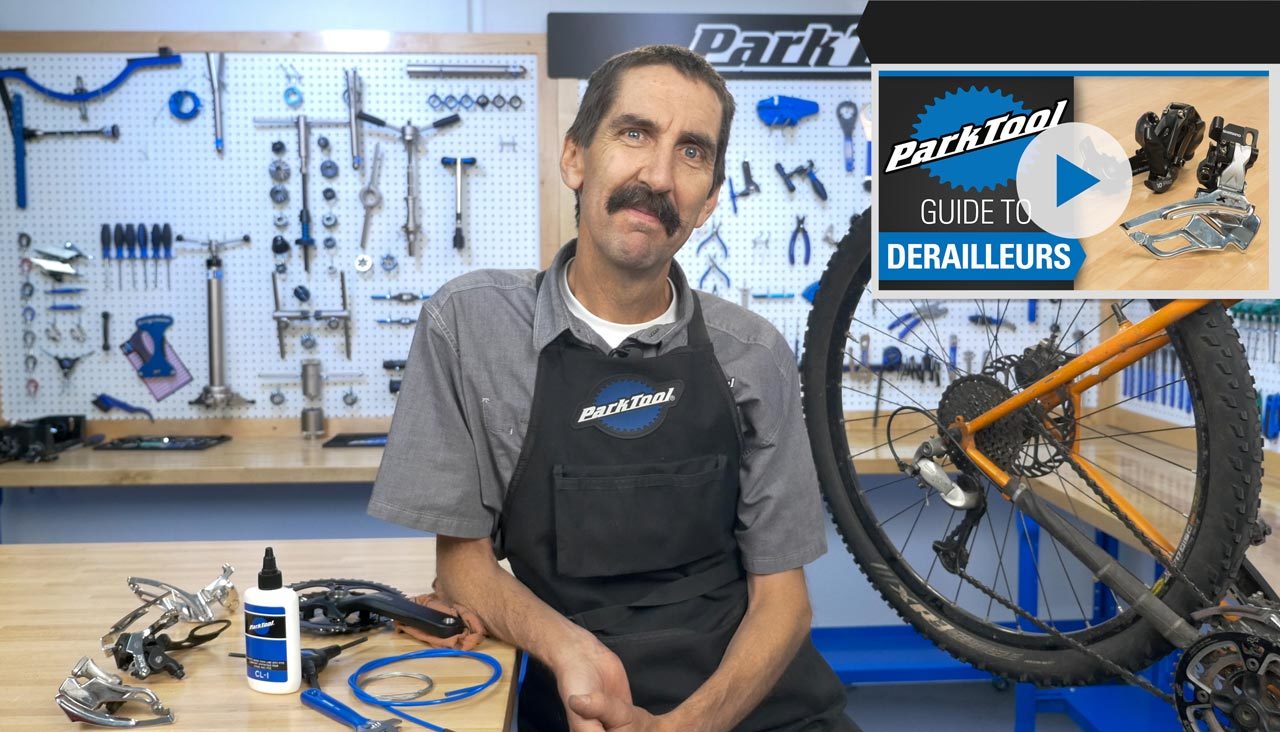 RBA: What’s your best tip for someone building their own bike?

DL: Go watch every Calvin Jones (above) video on the Park Tools website and avoid the videos on the Global Cycling Network; they are horrible!

RBA: Has working on bikes become too hard for the average cyclist?

DL: Look, a lot of us grew up in the ’70s with a real DIY culture, and that is actually what propelled much of the bike industry. But, I mean, today’s bikes have pretty much gone the way of cars and computers, and how many people are getting under the hood of either of those?! Plenty of people can fix a flat tire, but jumping into a 13-speed drivetrain is another matter.

RBA: I remember watching you pull wires on a bike with a Campagnolo ESP drivetrain, and the whole time you kept saying it was easy.

DL: When I was in the navy, we used to have to pull wire looms through F-14s—now that was complicated! I remember sitting in a Campy tech seminar in Vicenza, and they showed us these wires with magnets to pull the wires through the frame, which is what electricians had done for years, but it was a breakthrough in the bike industry, and now Park sells a ton of those things! I just wish we’d thought of that back when we were working on those Klein frames with internal cables back in the ’90s!

RBA: So what about internal cable routing, good or bad?

DL: It definitely adds some work for the mechanic, but I think it’s excellent for the end user, because it makes the bike look so sweet. I also appreciate how frame designers have come up with some ingenious ideas to make it work better. 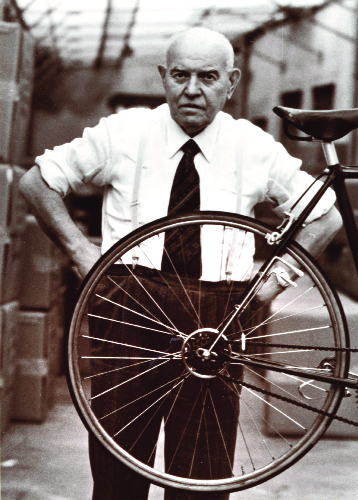 RBA: What about the increasingly popular integrated system design that a growing number of modern bikes are using?

DL: Actually, it was Tullio Campagnolo who first invented system integration when he invented the concept of a gruppo. To use a Campy derailleur you had to use Campy shifters, and to use Campy brakes you had to use Campy levers. Brilliant. I’m on board with it because it’s really forward-thinking. It’s like the European car concept I grew up loving where a BMW had to work with BMW parts, not like in America where you’d see guys putting a Chevy motor in a Ford chassis!

What’s important for me when I build a bike is that it all works together. For me, it’s what the cyclist feels when they look at their bike and how they feel when they ride it that counts most.

RBA: Most frequent need of customers?

DL: Just to be listened to and clarified for how their perception of their desired ride experience should work out. I’ve been in shops where a mechanic will pooh-pooh a customer for their choice of equipment or riding style. I hope to be able to listen and understand what the customer needs and offer them the options that I can provide. After all, it’s their bike, not mine!