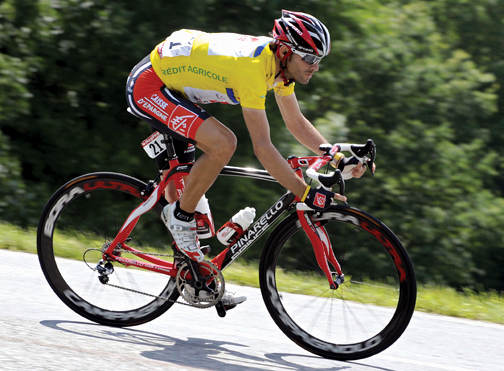 Caisse d’Epargne is one of the longest continually running teams in the pro peleton with roots stretching back to the Reynolds team of the 1980’s. Tour Champions Miguel Indurain and Pedro Delgado rode for the team as did great Tour riders Alex Zullv©, Josv© Maria Jimv©nez and even American Andy Hampsten.

The team was created in 1980, with Reynolds Alluminio as the title sponsor and Josv© Miguel Echavarri directeur sportif.  In 1982 Reynolds signed Pedro Delgado who left in 1985 but returned in 1988 and promptly won the Tour de France and Delgado followed up with a win in the Vuelta a Espav±a in 1989 for Reynolds.

In 1990 Spanish bank Banesto took over as title sponsor of the team and while Pedro Delgado was still team leader for the Tour de France, teammate Miguel Indurain was beginning to emerge. In 1991 Indurain took his first of his five straight Tour de France wins and set the stage for Banesto?s domination of stage racing in the 1990s. Indurain would also go on to win two Giri d’Italia, a World Time Trial Championship and the 1996 Olympic Time Trial gold medal in Atlanta. In 2001 the team changed its name to iBanesto.com and in 2003 Banesto ended its sponsorship. Illes Balears, the tourism board of the Balearic Islands took over sponsorship. Caisse d’Epargne became co-sponsor in 2005 and the team was renamed Illes Balears-Caisse d’Epargne., then Caisse d’Epargne took over.