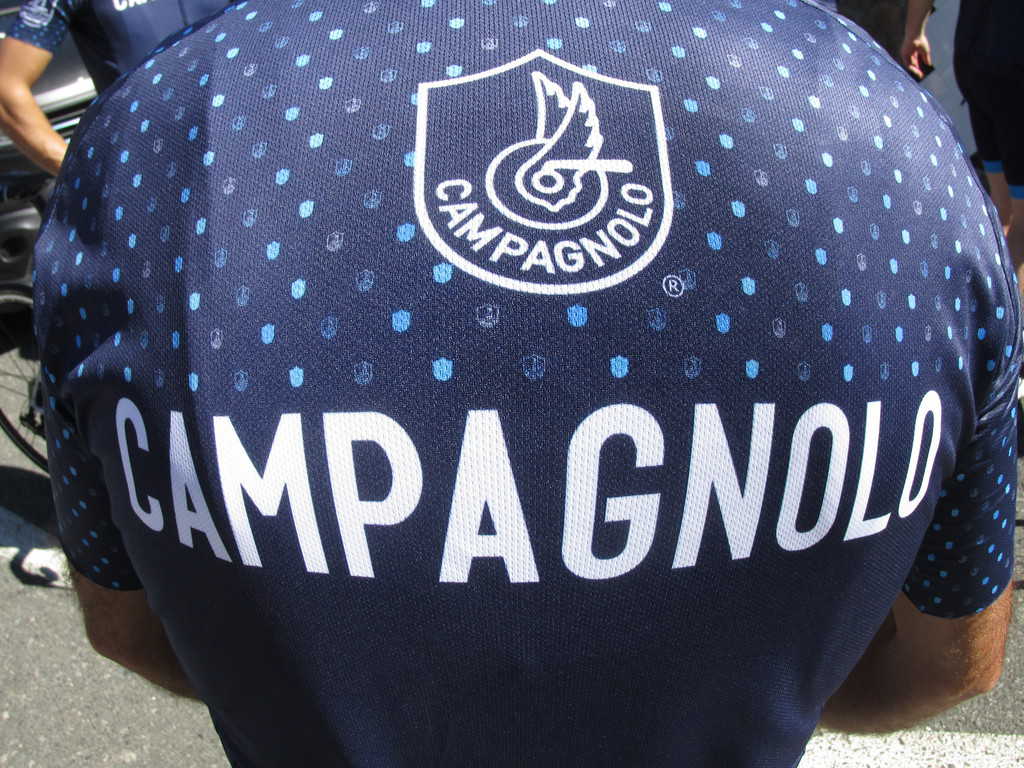 It’s a familiar refrain regarding Italian bikes, and one that we repeatedly heard last month when we tested two mid-priced bikes from Pinarello and Colnago that were spec’d with Shimano Ultegra drivetrains – “How come they don’t use Campagnolo?”

Nationalist considerations aside, in a word, it all comes down to a single issue – cost, and for years, due to their pro level racing legacy, quality construction and Italian manufacturing, Campagnolo components have been a fixture on high-end bikes only. Expecting to find Campagnolo on a $4000 bike is like expecting to find Donald Trump with a buzz cut – it’s just not gonna happen!

In one of the most important new product launches in the Italian company’s history, over a three week period Campy flew 52 journalists to the Canary Islands for a succession of meet and greets showcasing a variety of new products, but certainly with a bright spotlight on a new gruppo that they hope will, once and for all, find them some OEM spec in the ever expanding, mid-priced bike market. Let’s cut to the chase shall we? Potenza is the name of the new groupset designed to compete with OE/retail price points commonly associated with Shimano’s Ultegra group set. The Potenza (meaning “power” in Italian) gruppo includes new derailleurs, brakes and brake levers/shifters. Although the parts represent a never-before achieved lower price point, happily, they remain based on the same overall architecture and design/performance principles as their high-end Record and Super Record siblings.

And despite spending limited time on the new parts (consisting of a single 40 mile ride with ample amounts of climbing and descending) a key take-away is that the new Potenza parts are the perfect way for anyone to class up their bikes with some European (Romania to be specific) made parts at a price far below what we’ve come to expect from the venerable Italian brand.

In addition to Potenza, we were also shown a new Shamal Ultra wheel, the latest version of EPS 3.0, and the official launch of their impressive (and somewhat overwhelming) My Campy iPhone and Android app that can do just about everything except order a pizza. Oh yeah, there was also the small matter of  them showing-off a much anticipated disc brake. Crank: Of course to get the cost savings they were looking for, all the carbon parts that are found throughout the Record family are missing in action. The crank is a hollow, forged aluminum piece with a bolt pattern that mimics the ability of the Record cranks that allow you to run either standard or compact rings on the same crank. Very Nice. Aluminum chainrings (with 53/39, 52/36, 50/34 combos), a hollow, steel spindle, and a new type of extractor are also found. Trying to maximize chainrings stiffness, Campy stays away from a shared bolt pattern for the chainrings and instead relies on 4 separate bolts for each chainring.

The cranks, like the brake levers and derailleurs are available in either a flat black or a polished finish. Three crank lengths will be available: 170, 172.5 and 175mm.

Front Derailleur: The “front mech” (as the Euro-dawgs call it) is made from a die-cast aluminum body, with forged aluminum inner and outer plates. The cage is a newly designed, one piece steel unit that allows for a larger cassette and both better down and upshift performance. In comparison tests, Campy claims the derailleur is 10% more efficient in “upshift fluidity” versus Shimano or SRAM. Rear Derailleur: As for the “rear mech”, Campy has gone to great lengths to maximize its performance for a wider gear range than has historically been considered useful for serious road riders – as in a 32t cog.

Five cogsets are now available (11-25, 11-27, 11-29, 11-32, and 12-27) and each is comprised of one triplet gear with 8 individual gears attached. Campy is now using what they call “Embrace Technology” which allows for improved interface between the chain and gears which they say increases the chain/cog durability as we well as power transfer. Both medium cage (with a 32t max) and short cage (29t max) options are available.

Our Sarto test bikes were all capable of running cross-chained, and to help make that happen the front derailleur also has a trim option off the small ring.

Levers: There are two things that you need to know about Campy’s brake levers.

1. They don’t move. From the very beginning, when it’s come to integrated brake lever/shifters, Campagnolo has veered away from the shared lever concept. I’ll never forget the vehemence that Mr. Campagnolo himself used in expressing their philosophical disdain for articulating brake levers when they first rolled out their Ergo levers years ago. And, as anyone who has ever accidentally pulled the brake on while trying to make shift will attest, it is a sound opinion.

2. As with saddle shapes, lever feel is entirely subjective, but the sculpted shape of Campy’s carbon brake levers provide the bestest (yes, I mean the bestest) one-finger interface of any brake lever on the market. The good news? The same shape is used for the entry-level Potenza levers. Yes! The hood shape too is comfortable in multiple positions and for added comfort uses a special cushion design for damping road buzz.

Brakes: The Potenza brakes use the same “skeleton” arm design as its high-end siblings, obviously, with much less high-end components. However, Campy has come up with a new brake pad compound that is used on all levels of their caliper brakes. The pad provided a wholesale improvement in braking power and modulation. The Ride: Although despite their best effort to bring the price down, the Campagnolo Potenza parts will still be a tad more expensive than their Asian made competitors (especially since Shimano just lowered their prices), they are nonetheless big-time game changers in what is available for product managers who should be looking for ways to add some distinction to their bikes.

While there might be some out there who simply do not like the concept of separate shifters, especially with the inboard location of the rear shifter, but honest-injun, they can easily be reached and operated from the hoods, the drops or the flats.

Best of all, the performance of the Potenza drivetrain is simply spot on. Although rear upshifts required more throw than anyone with short fingers might appreciate, the downshifts were quick and efficient – at times literally as fast and smooth as electronic shifts. Only single rear downshifts can be made at a time, but it is possible to make up to three pre-shifts and the chain will follow suit as the cranks rotate. Three gear shifts can be made with a swipe of the rear shift lever. Owing especially to the new brake pad compound, the Potenza brakes did a masterful job slowing us down (with aluminum wheels) on a high-speed, 50 minute ling descent filled with more switchbacks than we could count (see above).

Of course, we will need much more time riding and working on the Potenza parts to provide a truly accurate opinion, but out of the gate, it is a very impressive effort and one that can hopefully bring a third player to a place in the market that has until now been comprised of a two-player cast.

With a retail price of just under $1000, you can expect a Potenza spec’d bike to still automatically be more expensive than any Ultegra spec’d bike. If your the type of cyclist who goes through life with every decision based on price, Potenza might not be for you. Campagnolo readily admits how well Ultegra works, but what they are offering with Potenza is the ability to enjoy something that offers a more distinct flavor, and experience, than table wine.

The goals that company founder Tullio Campagnolo set out over 80 years still rings true today under the watchful eye of his son Valentino. Quality and performance are what matters most. Simply put, there is no component company on earth that can rival Campagnolo’s rich, racing legacy, and with Potenza, it just got a lot easier for more cyclists to be part of Tullio’s tribe.

WAIT, DID SOME MENTION BRAKES? There is no doubt that no matter the real, across-the-world importance and impact of the arrival of Potenza that all the universal shop talk today will instead focus on the news that after months of speculation, Campagnolo has indeed thrown their hat into the disc brake ring. Although coy, no actually, downright off-putting, whenever the subject came up for the first few days, the disc brake was eventually unveiled as the last item of discussion. To stretch the mystery out even longer, the media scrum were mis-led until the last second when we were told that there “a new logo” was to be unveiled. Instead, it was a disc brake –BAM!

While the Campy folk were adamant that zero/nada/niente info about the brakes would be shared, this much was found out: they are hydraulic and will be available for either the mechanical or electric levers, despite rumors of a possible design and manufacturing partnering with Italian brake company Brembo, the Campy disc is solely a Campy product, both 160mm and 140mm rotors; standard skewer and 12mm thru-axle and flat and post mount designs were shown on the three bikes on display.

No one got to ride the disc equipped bikes, but just rolling the bikes forward and back and applying the brakes proved a very smooth and fluid modulation. More than fad, fashion or even the UCI, we were told that the real push for disc brakes came from the frame makers/Campy customers who were simply building more bikes with disc tabs.