Campagnolo 12-speed gets the electronic treatment 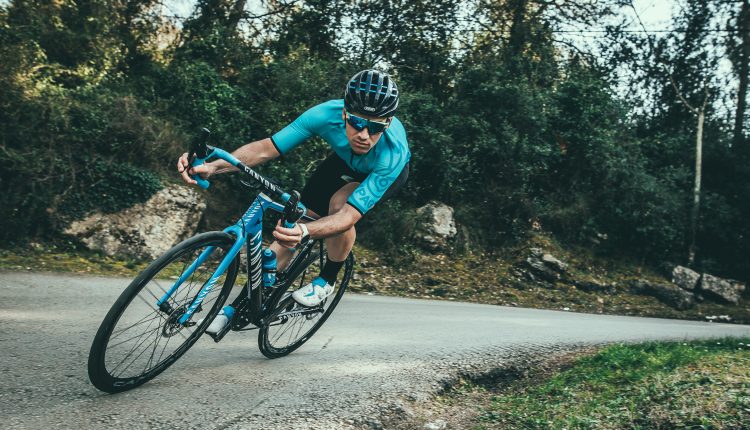 By leading the way to 8, 9, 10, 11 and more recently 12 speed, Campagnolo has always been a pioneer in the innovation of the racing drivetrain for the bicycle. The latest introduction of the movement12 Super Record and Record mechanical transmissions brought with it not only a new era in mechanical shifting technology but also superior gearing capable of improving the cycling experience. This new mechanical transmission served as the base for what would become the electronic version of movement12. No sooner had the mechanical version been launched did the engineering staff at the Vicenza HQ set forth to render the smoothest, most decisive and precise shifting ever presented by Campagnolo effortless via EPS technology. Prototyping led to lab tests, which then led to field tests, which then led to testing with athletes and finally the CampyTechLab phase of testing within the world’s most demanding laboratory of all: the World Tour. Thanks to the critical feedback and the subsequent seal of approval from the athletes of Movistar, Lotto Soudal and UAE Campagnolo is pleased to present the next step in the never-ending search to improve the cycling experience: Super Record EPS 12 speed. 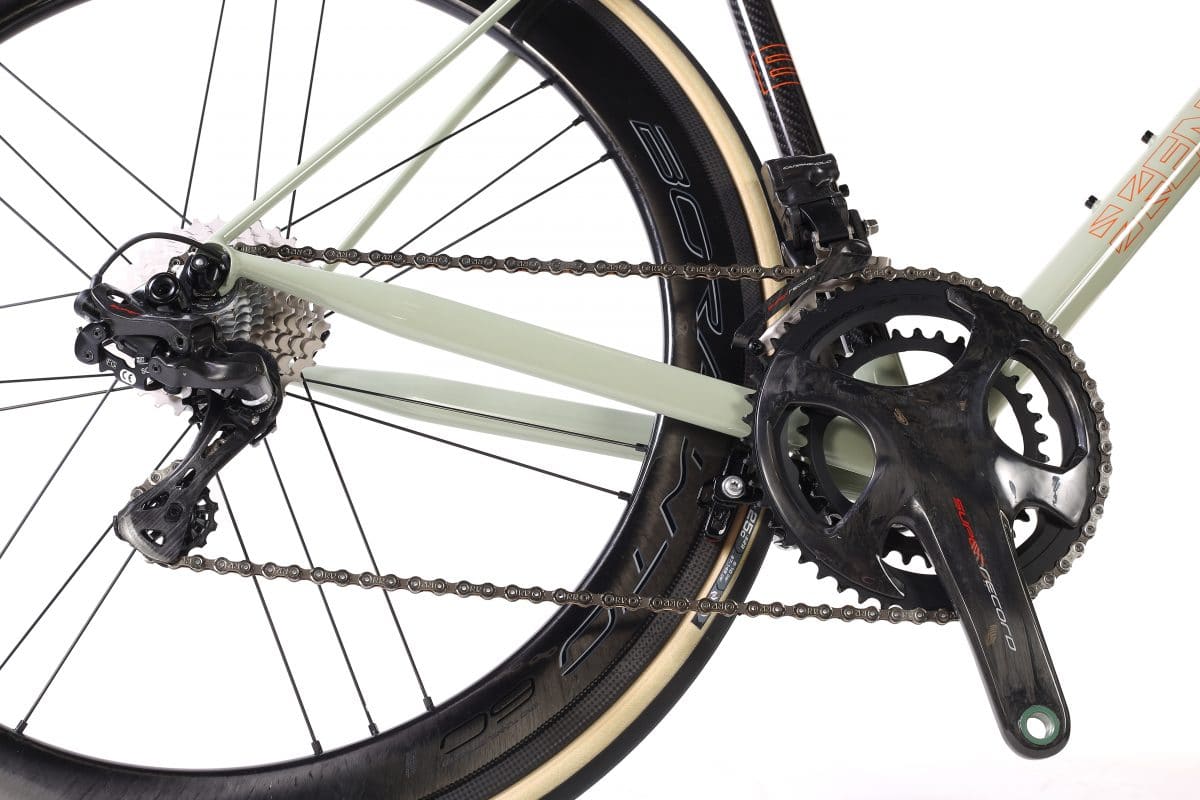 Its movement12 mechanical groupset origins are evident upon first glance at the EPS 12-speed Ergopower commands. Their form, shape and functionality were the fruit of meticulous study to ensure the most efficient ergonomic design for the mechanic versions and the same approach was taken in developing the EPS versions. The movement12 upgraded brake lever, whose form derives from lengthy studies in hand movement, together with the ergonomic form and positioning of the EPS thumb lever make for a control center modeled around the cyclists movement, comfort and needs. Maintaining the one-lever-one-action layout of those same commands ensures safe and foolproof control no matter the conditions or situation at hand. The rim brake Ergopower offers several positions in order to better accommodate different hand sizes and preferences while the disc brake version incorporates the AMS and adjustable reach system, which allows for not only personalized ergonomy but also custom performance.

New algorithms inside the system specific to the new transmission allows for the incorporation of Multi-Shift technology over 12 gears. By using the MyCampy app to customize your individual groupset, the new Super Record EPS is capable of up or downshifting up to 11 gears with one simple click. Multi-Dome technology, developed via tight collaboration between the Campy Tech Lab and Campagnolo sponsored professional athletes has made it possible to strike the perfect balance between operating force and tactile shift feedback.

Ergopowers are tasked with offering total control to the athlete and the mode button (located immediately behind the thumb shift lever on both left and right commands) makes that control complete. By simply interacting with the mode button the cyclist can check battery charge, make fine adjustments to the rear or front derailleur (even while pedaling) and perform all sorts of diagnostics. One prolonged push allows for more in-depth interaction with the MyCampy app. 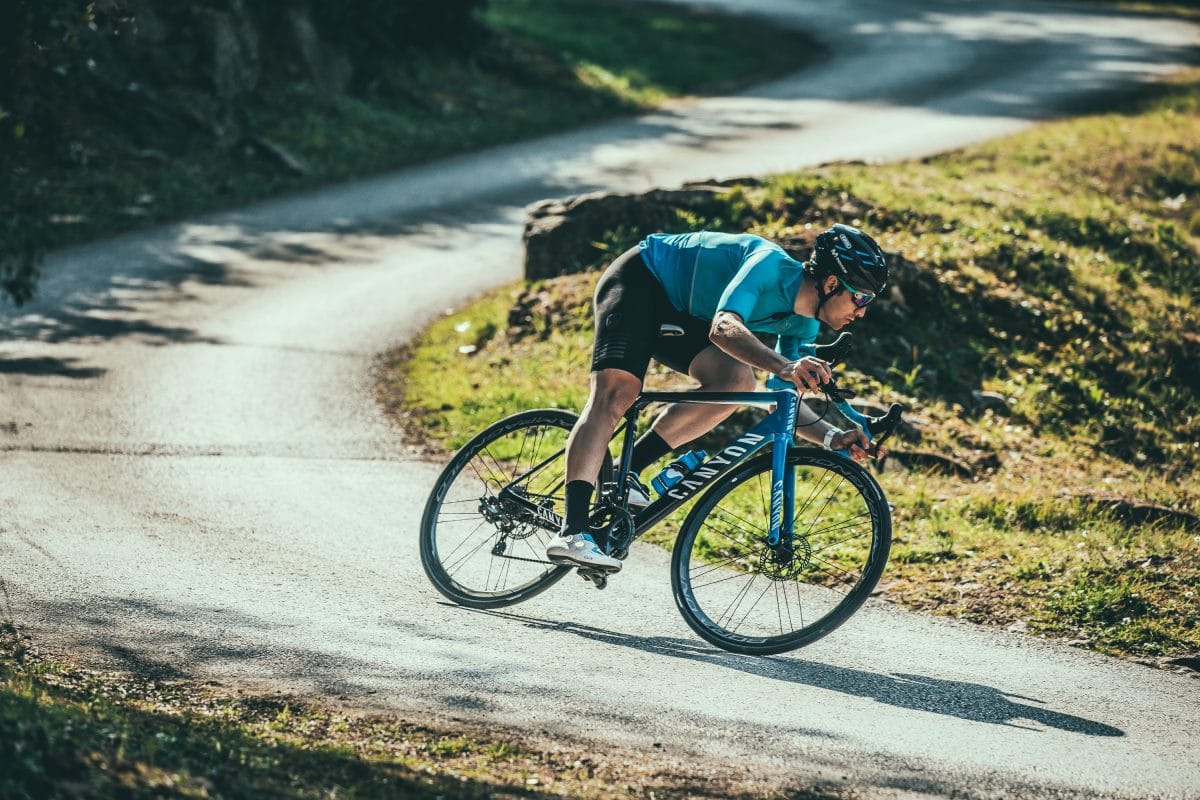 All of this communication from both the shifting levers and mode buttons is turned into specific action thanks to the new interface. Not only does it take the electronic impulses and communicate them to the front and rear derailleur but thanks to its dual antennae internals, boasting both Bluetooth Low Energy and ANT+, it is capable of real-time communication with a wide array of external devices ranging from smartphones to head units and more. While the external version bears a strong resemblance to its 11-speed predecessor a new internal interface has been developed, permitting assembly into either the handlebar or to specific frames with a dedicated interface area located on the down tube.

Equally slim and a bit longer the new power unit gives power to all of the movement of the movement12 EPS groupset. Thin enough to be compatible with nearly all framesets available on the market the new battery
is quickly mounted via two different adaptors. Industry-leading battery life is further extended with a 10% increase in charge capacity rendering the need to recharge a very infrequent necessity indeed.

The diligent work by the Campagnolo engineering staff to develop a new specific shape and form for the mechanical 12-speed front derailleur cage is put to use on the new electronic version making for some of the smoothest, most efficient and reliable derailing ever experienced. Combine an advanced and meticulously studied physical form with the sophisticated intelligence of the interface and the precision strength of the front derailleur’s motors and movement of the chain between chainrings becomes not only immediate but also extremely fluid even under load. With an aluminum inner cage, carbon fiber outer cage, long fiber carbon upper body and titanium fixing bolt it goes about its derailing duties while adding only the strict necessity in terms of weight. 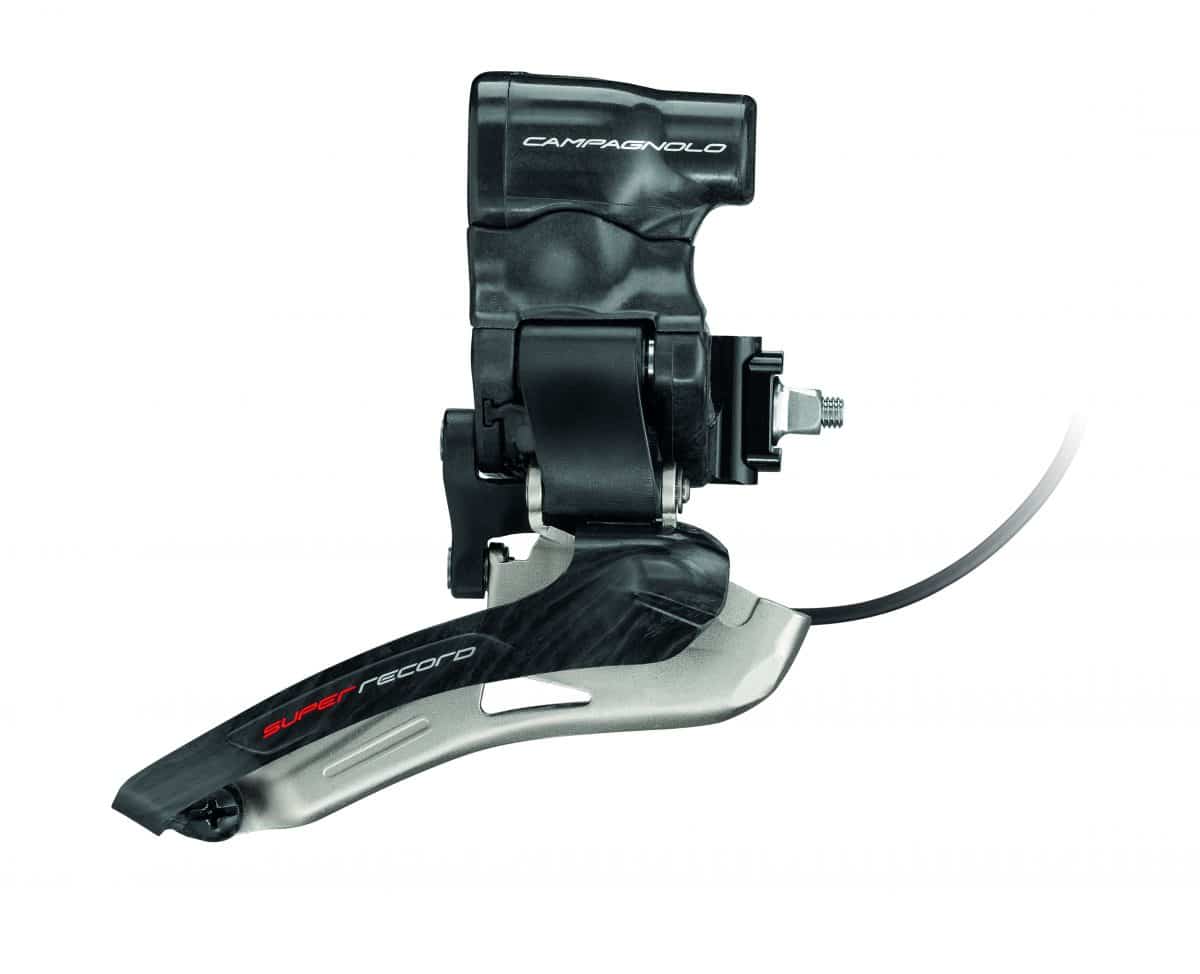 As with the front derailleur, the rear derailleur also takes advantage of many developments made for the mechanical predecessor. The same trajectory angle of 45° matches with a new shifting algorithm that electronically mimics the Embrace’s increased chain wrap specific to each single sprocket. Better power transfer and reduced wear and tear on the consumable parts of the transmission are but two of the advantages from the Embrace (be it mechanic or electronic) technology’s positioning of the chain vertically closer to the cassette. Compatible with the two currently available cassettes the two jockey wheels adopt the larger 12-tooth design and 72.5mm rear derailleur cage that ensures perfect functionality with all gearing choices without the worry of altering chain length. The cages thinner yet resistant structure allows for a larger gap between rear derailleur and spinning spokes making for an easier setup and safer all-around performance. 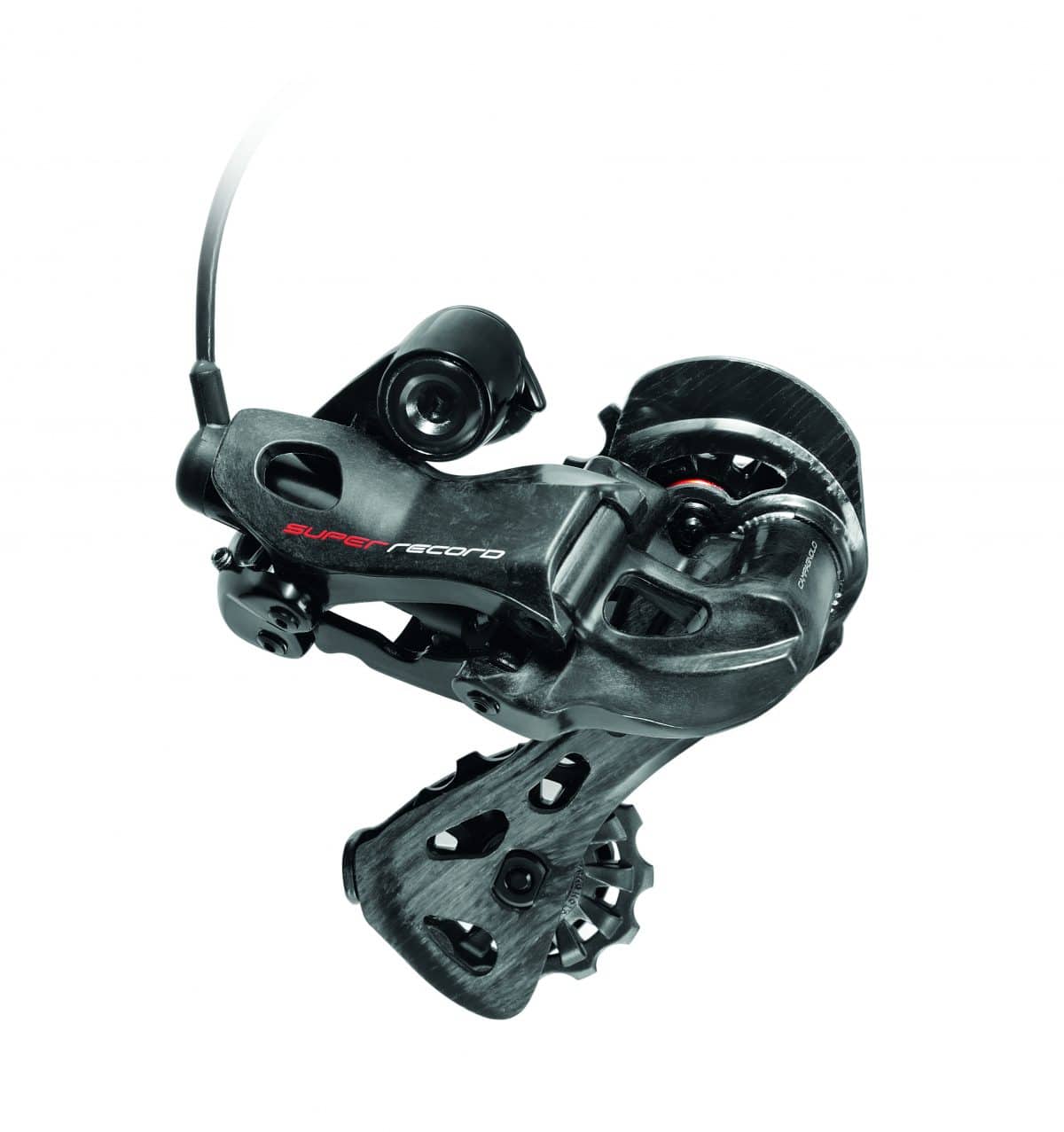 Moving the chain over the 12 sprockets of the cassette is a task that involves a greater deal of precision considering the increase of gears in the same spacing, effectively reducing the margin for error. Not only does the software handle this task with laserlike efficiency and speed but the front and rear derailleurs accomplish their task using the strongest motors available on the market. Built from a mixture of materials such as aluminum, lightweight technopolymer and long fiber carbon the EPS rear derailleur is built to live up to the Campagnolo standard of extreme durability, precision and reliability while tipping the scales at a scant 234gr.

The transmission and all of its components are the fruit of a great deal of research and development that culminates into lightning quick and amazingly precise movement, capable of winning hearts and souls thanks to its performance. However, extreme performance is worth little without reliability and while extremely lightweight the construction and craftsmanship of each and every component centers around offering precision and performance that lasts, despite the mileage, conditions or elements. Built to last, the components boast sturdy yet lightweight build and are constructed to operate flawlessly under any conditions thanks to their 100% waterproof rating. (IP67 standard)

Choosing the perfect gearing is simple thanks to the 12th gear allowing for a limited choice in cassettes that represent added versatility instead of a limit in terms of gearing. Effectively eliminating compromises in gearing selection, not only can the rider now pedal atop gearing suited for any terrain but he or she will no longer need to choose between cassettes specific to any one type of course. With 12 gears the need for a wide range of cassettes is effectively eliminated as the extra gear allows for single tooth increments all the way to the 7th sprocket! Athletes can choose between 11-29 and 11-32 with zero compromise in gearing. The new cassettes are completely compatible with current freehub bodies and rear spacing remains unchanged, allowing the rider to continue with his or her same wheels and frame without a problem.

The new 12-speed EPS groupset was developed around the new 12-speed chain, introduced with the mechanic drivetrains. While thinner and lighter also engages quicker and maintains the exact same durability of its 11-speed predecessor. A smaller, lighter and thinner solution that operates in the same spacing with the same precision while not compromising one bit the reliability of the industries longest lasting and most trustworthy chain is an accomplishment in and of itself.

The sleek and aerodynamic designs of the 12-speed Super Record crankset continue to incorporate the 4 arm, 8 bolt design that renders it both structurally more integral and reactive as well as offering interchangeability between chainring combinations. Structural rigidity is increased and lateral torsion all but eliminated in the hollow carbon fiber Super Record crankset, which adds additional carbon fiber bracing in corresponding areas of highest stress towards the outer edges of the chainring. 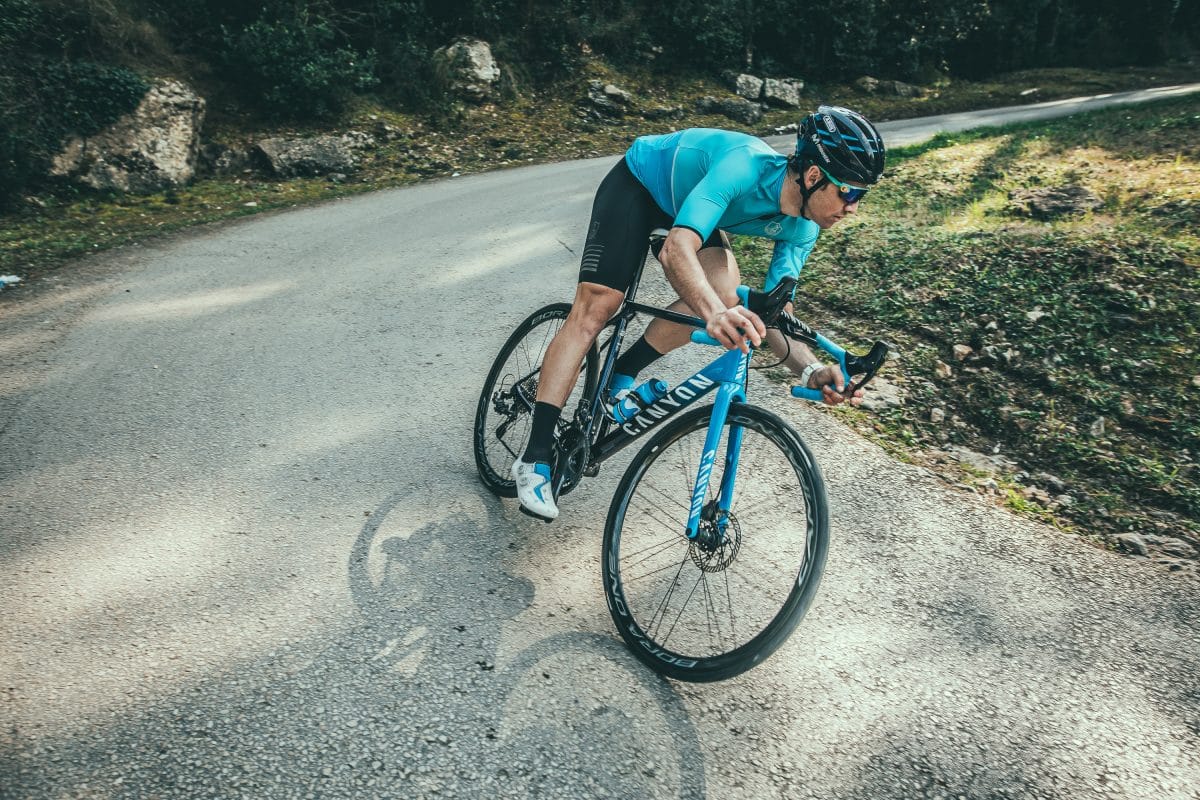 While the Super Record EPS 12 speed groupset stands apart thanks to its phenomenal capability to propel the bike and cyclist forward in the most efficient way possible it is the surefooted Campagnolo braking that gives race-winning control to extreme speed. The rim brake version of this all-new groupset will adopt the powerful traditional and direct mount solutions that were introduced with the mechanical movement12 groupsets. The disc brake version on the other hand incorporates the standard setting disc brake componentry whose fantastic modularity, power and reliability have won praise and awards across the cycling world. New however, is the pad whose top performer status is increased via new technology. The new pad receives a completely new organic resin compound that not only improves wear life but does so while maintaining both power and modularity. As such, the new compound eliminates the need to choose between durability and performance, effectively offering one singular solution without compromise to benefit the entire range. A new high-performance compound and powerful spring added to the already powerful magnetic movement make for a significant improvement of what was already considered standard-setting performance.

Made with the World Tour athlete in mind the newest groupset from Campagnolo is a pure thoroughbred drivetrain that feels most at home underneath athletes with numbers pinned on their jersey pockets. Accepting no compromises, this drivetrain seeks to offer the speed and control needed to make the technological difference needed to win at even the highest level. The Super Record EPS 12 speed transmission in its first outing, in the first race of the 2019 season gave immediate feedback of its winning pedigree as at races end it crossed the finish line in first place. Campagnolo 12 speed has already shown its ability to win at the top, let your 2019 start, and continue, on that same high note with componentry built to a different standard.