CAN YOU SEE ME NOW?

Our roads are clustered with distracted drivers more than ever before, so we are taking a look at a few ways to stand out in the sea of distractions. We are taking a look at reflection and when it’s helpful to have it. We are also taking a look at hi-vis and why it’s becoming so popular on the road. Both of these have been around for a very long time, but recently they have evolved from a level of geeky—or maybe we should say paranoid—to a level of normal and trendy.

A LEVEL OF REFLECTION

The market for reflective cycling products has come a long way from the spoke-mounted plastic bits that come stock on bikes and the leg strap that keeps your pants from getting caught up in the drivetrain. Nearly all of today’s modern cycling kits have small hints of reflection—from logos and piping to fabrics that are designed specifically for the cause and everything in between.

A key thing to know about reflection is that it’s only useful in very low ambient-light situations or darkness. It is also dependent on the light source that is bouncing off of it, so if either or both are not correct, it’s nearly useless. This may seem obvious to many, but even the brightest light hitting a reflective surface during the day will not overpower the ambient light of the sun. On the flip side, if it’s dark out and a light source bounces off the reflective surface but isn’t oriented in the correct angle of the driver, then it has very little to no effect.

Pearl Izumi has set a minimum distance of 100 meters that they use to qualify all of their products that use 3M Scotchlite reflective material. Recently, they have taken it one step further, and for each type of garment they have broken it down into zones with priority areas, useful areas and areas that have little to no effect. These zones then help them in maximizing the effect without sacrificing performance or technical aspects of the garments.

The most important take-away is that every cyclist should consider what elements of their kits are helping them to be seen by motorists. If you never ride at night, then having a jacket or accessories that are reflective will not be very useful. Instead, make a point of prioritizing items that have fluorescent colors. While most jackets and items that are fluorescent also have reflective materials, it doesn’t hurt to have them both and then not need it.

Here are a handful of some of our favorite items that feature both reflective materials and hi-vis colors that can help you stay a bit safer when it comes to weaving through traffic.

As much of a running joke as fluorescent-colored cycling kits can be, they do serve a very important function—safety. As cyclists, we all may have a million different reasons why we ride, but still, we do all share one common mandate—to get home safely after a ride.

Fluorescent colors always seem to overwhelm the colors surrounding them, but why? All colors have a level of light absorption and reflection, with black absorbing the most and white reflecting the most. The combination of the bright colors and their natural reflective properties similar to white make them stand out. There are four fluorescent colors that stand out brighter than the rest—yellow, orange, green and pink. These colors are enhanced 200 to 300 times more in light and allow for them to be seen five times further away.

So, if you use clothing that features these colors, you are more likely to be seen. This is true during the day and at night, unlike reflective materials that are only effective at night or very low-light situations. Think of it like your traditional traffic signs—during the day you see the bright orange or yellow signs, but at night those same signs almost glow silver from the reflective material that is used in conjunction with the colors. 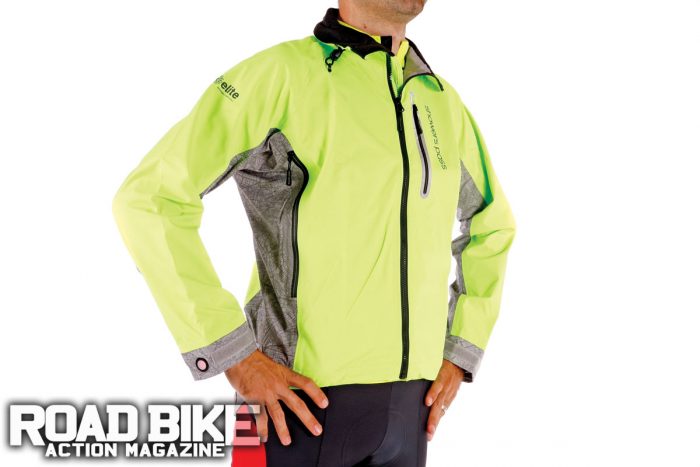 SHOWERS PASS Showers Pass specializes in keeping cyclists seen in even the worst of low-visibility conditions. The $279 hi-vis Elite jacket features three technologies for increased visibility: The hi-vis neon green color, side panels and other large portions of the jacket that are reflective and it has specifically positioned LED lights on the back and arms to even further enhance visibility. www.showerspass.com