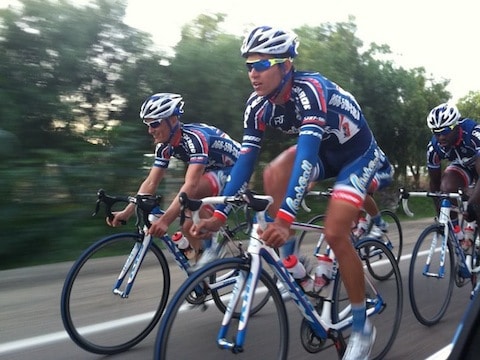 Share
Poised for success, CashCall Cycling Team enters 2012 with a roster and sponsors that match their lofty goals for the season.
Southern California’s premier Elite cycling team set the season in motion during their week-long training camp in San Clemente, CA from January 23-29. Camp consisted of big miles (400+ for the week), sponsor visits, team meetings, and of course lots of team bonding-on and off the bike. CashCall Mortgage Cycling will kick off their season with the Boulevard road race in east county San Diego on February 4th, before their turing attention to some of the season’s biggest targets: San Dimas Stage Race, Redlands Classic, Tour of the Gila, Dana Point Grand Prix, Cascade Classic and Manhattan Beach Grand Prix. Look for a rider report and a preview of CashCall’s 2012 KHS Flite Team bike to come. You can follow the team at CashCall Cycling
Video: Todd MacMillan/Not Far Now Productions