It’s safe to say that few bike brands we know of are as aptly named as Chapter2 bikes. Coming to us from New Zealand, Chapter2 got its initial start in the industry back in 2014 under the brand banner of Neil Pryde, which was also a famous name in the windsurfing world. The Neil Pryde bike effort was initiated by Michael Pryde, who was the son of company founder Neil, and the bikes were well-regarded (see our history of the company in RBA, June 2022). Unfortunately, somewhere along the way the NP effort got derailed and the Prydes departed. However, still devoted to the sport as he was, Michael was not about to go away, and he began working on his new bike brand back in 2015 following his departure from what he calls “chapter 1”.

In the time between, the Chapter2 brand was beginning to grow legs, and we even got a sneak peek at their first roll-out at the Sea Otter Classic in 2018. Since Michael Pryde has been the true inspiration for the cycling division from the start, it was a natural transition for him to start their next chapter. The company relies on a consumer-direct sales model, with much of the brand’s inspiration coming from the indigenous Maori people and culture who settled the islands in the early 1300s. 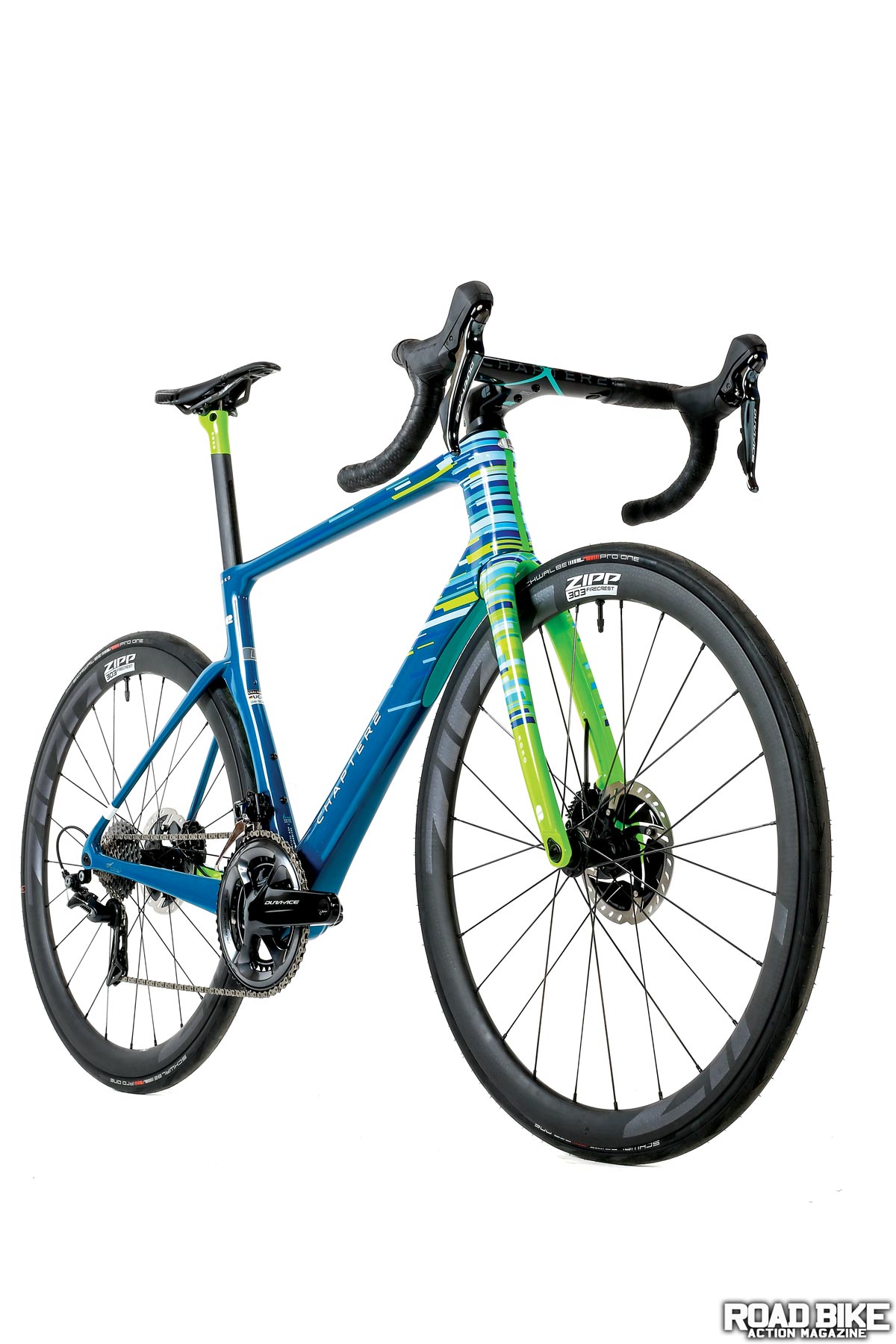 Chapter2 doesn’t sell complete bikes and believes that focusing on the frameset and allowing individual shops or regional distributors to choose the builds is the best way to serve the customer. With that in mind, the KOKO (Te Waihou) is their aero-road option that means “to soar, fly” in Maori.

The frame utilizes aero shaping and, like nearly every modern wind-cheating frame, internal routing from the shifter all the way to the brake caliper and derailleur. The frame is compatible with every type of modern drivetrain, including mechanical, electric and wireless. One of our favorite aspects is the T47 bottom bracket with 86.5mm road-width spacing. This threaded system allows one of the widest ranges of compatibility with the minimal maintenance that a threaded system offers.

Our size-L frame has a 57cm stack and 39.2cm reach that is ideal for riders 5-foot-9 to 6-foot-1. This might seem a bit long, but the forward geometry minimizes setback with the 58.7cm front-center length. The front head tube is 16.3cm at 73.5 degrees for a wheelbase of 98.4cm with 40.8cm chainstays. Even with room for 32mm tires, overall, the disc-specific frame is still as race-oriented as we would expect from such an aero offering.

Since Chapter2 uses its resources to focus on the frameset, our build was a unique one. While it’s not included, for $699, the one-piece Mana carbon handlebar/stem combo was the best pairing for a fully integrated build. Mana means “power” in Maori, and the stem/handlebar units are available in five sizes—from 80mm x 40cm to 120mm x 44cm.

Chapter2 does include the proprietary seatpost that uses an alternating wedge clamping system to allow customers tune the level of compliance they prefer. When mounted with the wedge up, the system has a stiffer in saddle feel, but for us, we chose down essentially lengthening the seatpost to offer just a little extra flex. On the same note, to achieve the short 40.8cm chainstays, the seat tube is dramatically molded around the tire, offering very little vertical seatpost adjustment (about 10cm). Topping off the post was a Selle San Marco Concor Carbon FX saddle with carbon 7×9 rails.

For our build, we opted for what might be the last top-tier Shimano mechanical drivetrain—Dura-Ace 9100 11-speed. Since the bike is speed-oriented, it had a 52/36t crankset matched to an 11-30t cassette. The hydraulic disc brakes are paired with 160mm rotors on the Zipp 303 Firecrest wheels. The wheels have a wide internal at 25mm and are set up tubeless with a pair of Schwalbe Pro One 30mm tires.

To get things set up, we first had to cut the included seatpost since the usable straight portion of the seat tube is so short. As we already stated, we also chose the lower wedge position to maximize saddle compliance. Since we have been getting more of the forward-oriented geometry road bikes lately, getting our position optimized was easy but can be difficult if you have yet to try it.

On the road, the KOKO surprised us with its comfort, and for a race bike, we were impressed. Even when we switched to the high wedge position, we still felt that the post was engineered well and offered a supportive but flexible feel. Out of the saddle, the bike is laterally stiff and hard efforts were well-rewarded. The Mana bars are very stiff in the hoods and have just enough compliance in the drops to allow us to spend a lot of time in them, even when on the rough roads outside our office.

While the aero-optimized frameset cuts through the air at speed, we were probably most impressed with its ability in the mountains. At 16 pounds it’s light, and the forward geometry keeps your weight well-balanced over the front no matter if you are climbing in the saddle or out. When you point it back down, the technical descents were as fun as they come.

The short chainstays allow the bike to transition tight corners and winding switchbacks at speed. The long front end is stable but responsive, offering what we would say is confidence-inspiring fun. Every turn felt fast but in control, leaving us wanting to spend more time in the mountains.

For us the KOKO has been a surprise, and the aero-optimized design is one of the most balanced road bikes we have ridden. The bike’s stability at speed keeps you pedaling hard all the time, but the short chainstays and overall length make it a weapon on the twisties. Further elevating our appreciation for the ride quality, between the room for 32mm tires and the outstanding compliance in the saddle, this race bike performed as an excellent all-day bike.

Overall, Michael Pryde has done a great job designing an aero-optimized road bike. As much as the ride stood out, so, too, did the very unique Maori-inspired graphics. For us, Michael was Pryde Bikes, and this new brand name only makes it easier to stand out, since the Neil Pryde name is so dominant in the water sports industry.

The KOKO is a great addition to the growing line of aero framesets on the market. The utilization of modern geometry, carbon construction and passion have delivered a bike that is for more than just those looking to cheat the wind.