Checking in with Ben Wolfe 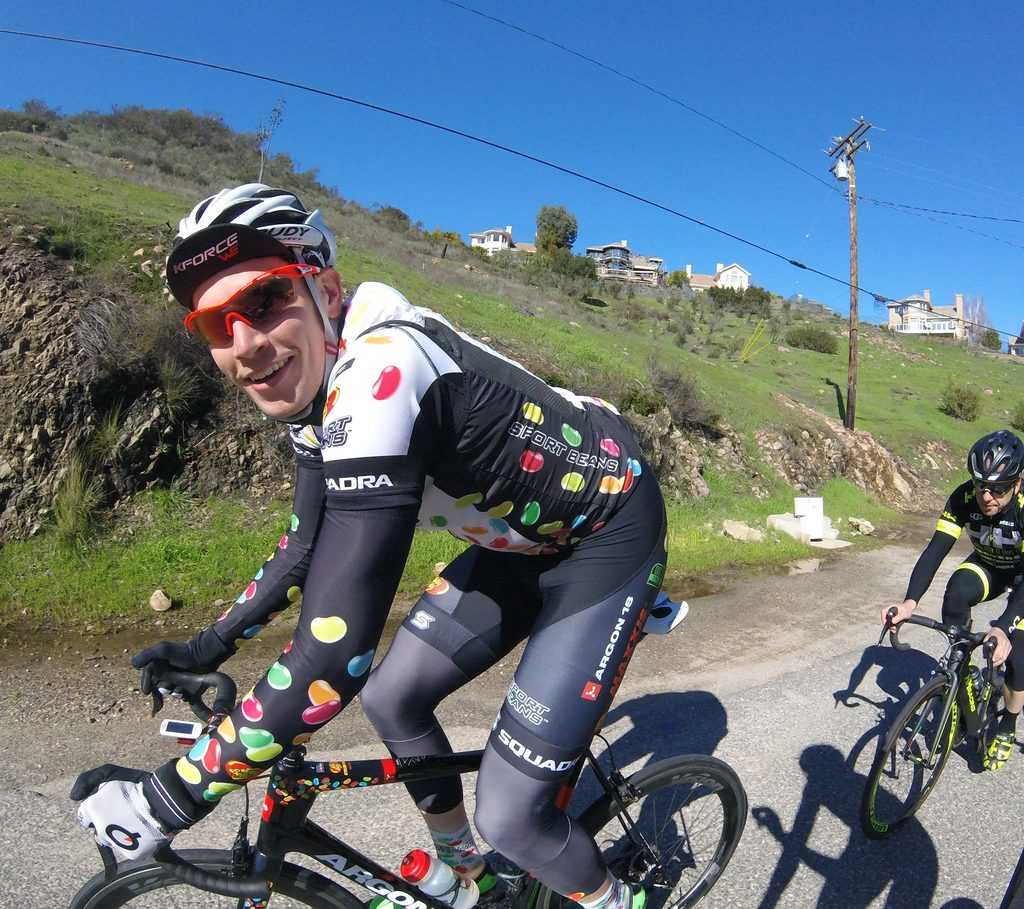 During our time at Press Camp last week we ran into Jelly Belly Pro Cycling’s Ben Wolfe. Ben is one of those gentle giants of the pro peloton who has a really great personality and is always up for a good time. He is about to begin his third year racing pro and second consecutive with his Jelly Belly team. Before we got our day started we grabbed a quick morning coffee to catch up and see how he’s doing. You can follow Ben at @BencWolfe & @JellyBellyCycling

What brought you out here to Press Camp Ben?

I came out here with FSA (Full Speed Ahead) to launch their new electronic shifting group called FSA WE, and so far so good I’ve been having a great time with them. The weather has been decent, so I couldn’t of asked for a better time.

With you being a pro cyclist, how do these appearances work out?

I think it came down to myself being a friendly type of person, a bit social with everyone. I enjoy coming out to events like these for sponsors and talking with people while showing my support for the product I’m using. I found out around Christmas time that I may be coming out here, but it wasn’t a for sure plan until about a week ago. I was actually hoping the weather would be a bit warmer out here because it’s actually really nice back home in Greenville, South Carolina so to come out here and it be a bit on the colder side is surprising.

Have you used the new FSA group? If so what are your thoughts?

The new FSA stuff is pretty awesome. They changed a lot going into this year and even their wheels had a huge improvement. I noticed they were much stiffer in the cornering and when I lay down my incredible sprints they respond really well (laughs). The new electronic group is really fast, it shifts well, and the levers have a nice feel. They also changed the paint scheme on the bars and stems which in my opinion look a lot cleaner. Their carbon wheels also have a new braking surface which is supposed to help in wet conditions. Yesterday I rode up in the mountains above Santa Monica and I got rained on a bit so I was able to give them a good test and they surprised me with how well they slowed down on those twisty canyon descents, I’m not exactly a little guy.

Another year with Jelly Belly Pro Cycling, you excited for this season?

Definitely, it was a bummer we lost Lachlan Morton (Dimension Data) but besides that the team stayed relatively the same. We have a good dynamic. It looks like I will have a bigger role to play, a bit more of a leadership position with the guys so I’m looking forward to what that will bring. I will be able to do some more of the races that I will want to do, which is mainly all of them. I just want to race as much as I can and focus on TT Nationals and the team time trial at Nationals.

You finished your season in September in Japan where you spent two weeks over there. Tell us a good story from that trip.

Well I only rode my bike four times so thats a start. Other than that though what sticks out in my mind was that the team flew over before I did since I’m based on the east coast. The team is on the west coast so it made sense for me to fly later, at least in my mind. Once I made it over there and got off my plane in pretty much the middle of no where in China, to my surprise there was a sign that said “Jerry Berry” which I thought was a joke. I was waiting for Ashton Kutcher to jump out and laugh at me. So they put me in this weird taxi to bring me to the hotel and the taxi had these loose bar stools that you would sit on, and they had techno music blaring, people were chain smoking cigarettes in their as well. To make matters worse my interpreter wouldn’t get in with me, she just said “get in and they take you to hotel.” I end up getting into this taxi by myself with nobody that speaks English and drive for about thirty minutes to get dropped off on the street with my bags and the driver just points to a building. I assume that is my hotel so I go in and hand my passport to the front desk and no words are exchanged I just get handed a room key that has 1078 written on it, but it was only a one story building so I’m thinking how is this going to work. Well much longer story short it actually just read number eight. I finally get into my room and pass out to be waken up in the morning by the front desk and all they say is “bus.” I go down stairs and hop in the bus and that ended up being an eight hour drive through dirt roads which finally lead me to the race hotel in some smaller town in China. I showed up late at night and went straight back to bed to wake up in the morning for our first race where we finished second, fifth, and eighth. It worked out pretty well.