Checking in with Robin Carpenter 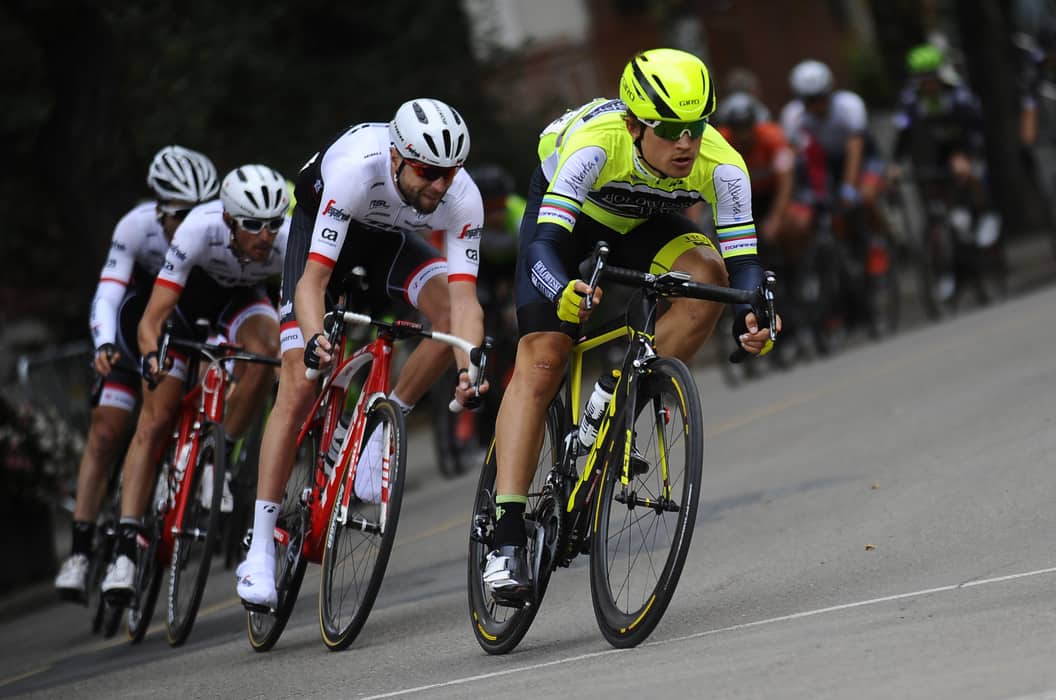 Robin Carpenter is about to enter his fifth year on the current Holowesko – Citadel p/b Hincapie Professional cycling team. He started in the continental ranks back in 2012 with the Garmin-Chipotle squad. Coming into his sixth season as a Continental pro he is still on the young side at the age of 24. Coming off an impressive year in ’16 many people may be scratching their head’s as to why he wasn’t snatched up by a World Tour team. His results were quite impressive with the Tour of Alberta GC overall, Cascade Classic overall, Tour of Utah stage win, 3rd at Tour of Beauce GC, 4th at Joe Martin GC & 15th on GC at the Tour of California. He also won a stage of the US Pro Challenge back in 2014. Outside of the US he has had win’s as well with a Pro Kermesse win in Belgium in 2013.

Through all of this success, one would think he would be an easy addition for the larger teams.  There is some interest, but at the end of the day, he chose to stay at the Continental level. This may be surprising to some as most look at the three levels of cycling teams; Continental, Pro Continental, World Tour, as stepping stones to the top. Robin has other thoughts though and isn’t quite ready to jump into a situation that isn’t ideal. We’ll let him fill you in on the rest.

What are your thoughts on why you didn’t receive a World Tour contract for ’17?

There were a couple of things I believe. I didn’t want to quite throw myself to the wolves and take anything that could’ve been offered. I think if I had cast out a wider net there could have been a better chance that I got a contract. I was a bit hesitant though to do that as I’ve seen quite a few guys recently go that route and their careers suffered. It was also a strange year with teams buying up riders with UCI points because there was supposed to be the rule change where they reduce the number of riders per World Tour team. The World Tour was supposed to drop 1 team and instead you had the inclusion of the two new teams. With most teams also signing riders in the July/August time period that hurt me a bit as my results really ramped up towards the end of the year. Other then the lack of World Tour offers you did have two Pro Continental offers. Why didn’t you choose to move up to one of those teams?

Yes, I had a couple of offers to go that route, but the reality is that situation would have only been marginally better than the position I am in now. I could have possibly done more racing in Europe, at least with one of the teams. Financially I am good with my current team so that wouldn’t have been a big step up. More then likely I would’ve had to move to Europe for a large portion of the season. At the end of the day though it was a tough decision after I weighed the pro’s & con’s because from the outside looking in, it seems to be the direction to go. Most people view cycling as a stepping up platform, and you do well at the Continental level then you proceed to move up to Pro Continental, and/or World Tour. I don’t think that most people realize though how nice of a setup we have on the Hincapie team, you can’t necessarily see the inside of the team with the amount of support we get from the team, staff, sponsors, etc. I believe we have it just as good if not better than a lot of those Pro Continental teams out there.

Let’s take a step back to a year ago and discuss your early season crash. Do you think that may have contributed to your later success in the season?

Last year at this time we were getting ready for the Tour of San Luis which was very early in the season; January. I was doing massive rides in December and not necessarily flying but was fit for this time of year. Once I came back from Argentina I kept my training going and was out doing long rides with real hard interval based structure at the beginning of February. I went down to a local CBR crit and had a much bigger rider chop me for no good reason at all which put me on the ground. I ended up walking away from the crash with a concussion. In hindsight, that crash could’ve helped my season in the big picture. If you look at many of the other racers who were flying early on in the year they really lost that fitness towards the end of the season. Possibly being forced to take this break early allowed me to stay fresh later in the season for the harder racing and training that I was doing. That crash sidelined me for five weeks kept me off the bike. I still went out to camp but wasn’t allowed to ride. Once I got finished with my break, I got back on the bike and put in four good weeks of training to head into the Redlands Classic. I was surprised with how I felt at Redlands, as I rode well. You’ve recently gotten engaged, how does your travel & racing affect the home life?

Well, my fiancé Hannah has cats, so that helps.(laughs) That’s actually why we got them in the first place. Part of racing in the US though is having the flexibility of being home when I can.  She is currently in grad school, so she doesn’t have much flexibility. She works hard with that all year, so we both have our plates full. I am hoping the right opportunity will come along with a bigger team, where they want to support me and take my needs into account, allowing me to support my wife and cats. But who knows maybe the year will come where we head over to Spain and give it a chance.

You would take the move up if the right opportunity came your way?

I would, but at the same time my priorities in life are having fun racing bikes. Part of leading a fulfilled life in bike racing is being happy, and I think that I have figured out that my happiness isn’t just derived from race results or the level of prestige you get from having a World Tour contract. I like the guys I race with and the support the team staff offers currently. So if the opportunity came it would have to be understood I wouldn’t just move overseas to slog it out in smaller races but would like to give it a proper shot in the larger races while also leading a balanced life.

How do you feel about the current Tour of California dilemma?  What are your thoughts on the race possibly going World Tour and barring the Continental teams from coming?

I hope we get to race it, but I am skeptical that we will actually get into it. I see where they are coming from with wanting to grow American cycling in the long run and I can kind of agree with that to some extent. You want races to move up and become more important. With that being said though there is already a lot of emphasis on the smaller races in the US with Philly, Joe Martin, etc. The truth of the matter though is that pro cycling in the US is a bit stunted. The continental teams weren’t supposed to be our pro teams. They were meant to be more or less the feeder teams to the Pro Continental/World Tour teams. Maybe it’s from the lack of large races and/or money we don’t have many top races in the US or top teams. We have almost gotten stuck in this area where we have a lot of Continental teams but not many others. If they decide to make our largest race World Tour then we won’t be allowed to race it, I think it’s going to hurt more than it will help. These teams will just fold up and go away; then the US will have to start all over. It would be nice if the UCI made an exception to let some teams in but unfortunately I don’t believe the UCI has a great track record of doing things that are pragmatic on a case by case basis. So at this point, I have my doubts and I’m not setting my goals around California. It’s January and we still don’t even know. Armstrong Says He Was “An Easy Target” In Latest NBCSN Interview