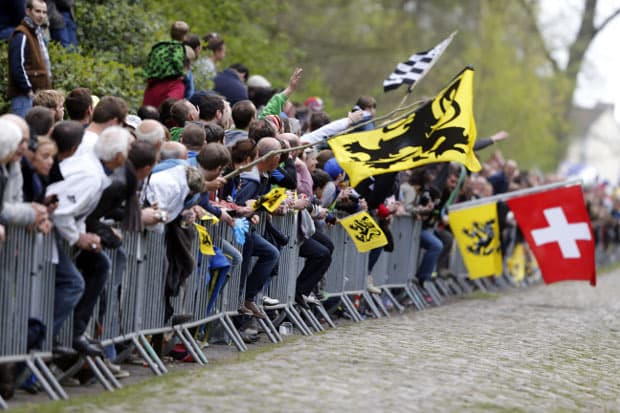 The professional cycling season is just getting started and riders are putting in the miles and early-season performances they hope will bring about the form necessary to win some of the most prestigious races on the calendar: Milan-San Remo, the Tour of Flanders, Paris-Roubaix and the other Spring Classics. I had a love-hate relationship with the Classics. I loved the history and the grandeur of those races but I was a domestique and I understood that my role was to survive as long as I could, sacrifice when it was called for, and hope to reach the finish line. Perhaps that’s why I always remember the1988 Paris-Roubaix, because it was won by a domestique not all that different than myself.

FIRST MONTH FOR $15!
CTS is 15 years old! To celebrate, your first month of coaching is just $15! Offer is valid on all coaching package levels for new coaching signups in the month of February!

In 1988 I was still coming back to form after my badly broken femur in the winter of 1986-1987. I missed most of the 1987 season due to the injury and subsequent knee surgeries, and I had more surgeries in the winter of 1988. I missed Milan-San Remo that year, a major training stimulus as well as one of my favorite races. Instead I raced Tirreno-Adriatico and the Three Days of DePanne, but with not much racing in my legs prior to Paris-Roubaix I knew I was in for a rough day.

My 7-Eleven teammate Roy Knickman made it into the early breakaway, a 12-man group that contained strong riders but no one that motivated the team leaders to mount a significant chase. The lead went out to more than 5 minutes. Knickman was the dark horse in the break. He was stronger than many gave him credit for, but he was young – only 22 – and relatively unknown. He was in a great position to have the day of his life! Unfortunately it all unraveled for him in the Arenberg Forest when a flat tire took him out of the break. In those days there weren’t mechanics stationed in the Arenberg Forest with wheels, so it was at least a minute before the team car could find him and get him a new wheel. By that time his chance of rejoining the break was gone, but he soldiered on and eventually finished 14 minutes down.

Belgium Cobbles Race Experience
Come with me from April 3-13 for the Belgium Race Experience to ride both the Tour of Flanders Cyclo and the Paris-Roubaix Challenge, with VIP viewing of both races, a Ridley factory tour, and visit to the Flanders Museum.

My day ended with much less fanfare. As much as I wanted to reach Roubaix, I didn’t have the legs and abandoned at the second feed zone. As we listened to the race radio it became apparent that the early-morning breakaway was actually going to survive all the way to Roubaix, and that meant that pre-race favorites like Sean Kelly and Laurent Fignon would be left to fight for scraps. Ahead of them, Thomas Wegmuller – a domestique who had gone into the breakaway so that the KAS team led by Sean Kelly had someone in the move – attacked with 10 miles to go and only Dirk Demol, a domestique for Eddy Planckaert (winner of the Tour of Flanders the weekend before), was able to follow him.

I had raced with both Wegmuller and Demol as we came up through the amateur ranks in kermesses across northern Europe. Demol was strong and tough as nails, but I had always felt pretty well matched with him. Wegmuller was a different story. He was a guy who could lay down the power and just ride you off his wheel, and with the two of them away on their own I was certain that Wegmuller was going to win Paris-Roubaix.

In the streets of Roubaix an errant plastic bag blew into Wegmuller’s rear derailleur. We only heard about it on the radio at the time, but in this YouTube video from the 1988 Paris-Roubaix you can see it clearly. He was able to pedal but couldn’t shift, despite the efforts of the team mechanic hanging out of the car window. Nevertheless, Demol didn’t attack him. It’s hard to second-guess a rider in that position at the end of 166 miles, and perhaps he welcomed a chance to catch his breath while the mechanics tried to fix Wegmuller’s bike on the fly.

In 1988 Paris-Roubaix didn’t finish on the velodrome in Roubaix. Instead the finish was on a flat and straight road. Demol forced Wegmuller to lead out the sprint but once it began in earnest Demol easily distanced the Swiss rider aboard his crippled machine.

Dirk Demol won Paris-Roubaix! It was a result virtually no one saw coming and the fact that it came down to a sprint between two domestiques provided the kind of hope that motivates domestiques to keep fighting in the trenches.

For most people the 1988 Paris-Roubaix doesn’t rank among the most memorable or fabled editions of the race, but for me it’s the first one that comes to mind when someone asks me about the Classics. Dirk Demol wasn’t the strongest or fastest man in the race. He won by grit and determination, by being bold enough, fortunate enough, and wise enough to put himself in the right positions at the right times – over and over again in the course of 166 miles – and by getting a bit lucky.

Grit. Positioning. Luck. These things are essential to winning races, no matter whether it’s the local criterium or Paris-Roubaix, or whether you’re the favorite or the afterthought. Even among athletes of equal physical ability these are the things any rider can leverage to put himself or herself in position to win.

Athletes – and some coaches – focus so much on the physiology of performance that they forget to learn or teach about how to compete. Your power numbers alone don’t win races. In a real competition any athlete can be beaten and any athlete can win. The key is to become a competitor, to look for opportunity and seize it, to dig deeper than the other guy is willing to dig, and hope for a little luck.