What about the riders, the fitness and the stages 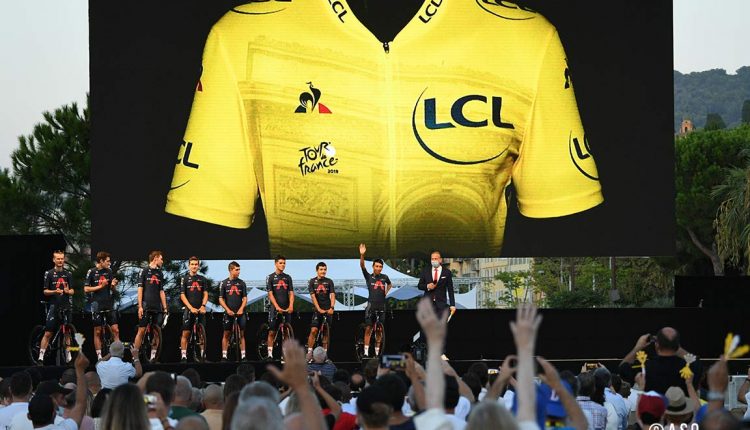 Ever since the early 2000s, when live Tour de France coverage debuted in the United States, my daily routine for July included listening to or watching the Tour each morning. Sometimes it was just playing in the background, other times I was glued to the screen, but it was always there. COVID shuffled the pro cycling season, but even if it’s the last weekend of August, I couldn’t be happier to see the Tour de France get underway. I believe this will be an exciting edition of the race, for several reasons, and throughout the race I will be writing about what I find interesting–particularly related to training and strategy–on Thursdays and Saturdays.

COVID’s Effect on Rider Fitness
A recently released study looked at training volume and peak 5-minute and 20-minute power outputs for a UCI World Tour team in the 10 weeks leading up to the COVID lockdown in Spain (March 15, 2020) and the 7 weeks during lockdown. Typical training volume for pro cyclists is about 20 hours and 600km per week. The majority of this training is at a low to moderate intensity (Zone 1 and Zone 2) with short but focused time spent at intensities above lactate threshold (Zones 5-6). During the lockdown, training volume decreased by 34% to about 12 hours per week. The distribution of time-at-intensity also changed, with a 52% drop in time in Zone 1 (recovery), and decreases of 40-52% in time in zones at and above threshold. After 7 weeks of altered training during lockdown, the pro riders’ peak 5-minute power dropped 12% and peak 20-minute power dropped 9%.

Cycling Study
The findings above shouldn’t be too surprising. Riders at the elite end of the spectrum have to maintain a high workload to maintain elite-level fitness. With no racing on the horizon and a runaway virus threatening everyone’s health, the benefits of more rest were more important than maintaining razor-sharp fitness. But that doesn’t mean the lockdowns haven’t had a lasting effect on rider fitness that could impact the Tour de France.

Less Depth of Fitness
One of the reasons the 2020 Tour de France is going to be an exciting race is that we don’t know if the fitness and performance we’ve seen from riders over the past several weeks has depth or is just a thin shell that will crack under pressure. Riders spent a chunk of the spring training indoors at reduced volume and reduced time-at-intensity, missed team training camps, and have far fewer days of racing in their legs. I anticipate this will lead to a much more open and unpredictable Tour de France, with some expected favorites who falter and some unheralded riders who surprise everyone. All the riders had to deal with the COVID shutdown, but just as there is individual variation in athletes’ response to training, there is also variation in how athletes respond to adversity and unanticipated breaks from training/racing.

One of the most surprising revelations in the run-up to the Tour was the omission of Chris Froome and Geraint Thomas from the Ineos Grenadiers squad. Already attempting to return to Tour-winning form following a long recovery from a broken femur, it’s understandable that Froome couldn’t replicate the training stress from missed early-season races. I guarantee he worked as hard as possible, but it was clear in the Critérium du Dauphiné that he didn’t have the form he needed. Geraint Thomas’s lack of form was less explicable, but no less clear. Fortunately, Thomas can pivot to make the Giro d’Italia his priority for October. Froome and Thomas’s struggles may be more high profile, but they illustrate difficulties affecting riders throughout the peloton to varying extents.

Who’s going to win?
Based on what we’ve seen so far during the truncated 2020 season, I agree with several columnists that Egan Bernal and Primož Roglič will be the primary competitors for the yellow jersey. Neither finished the Critérium du Dauphiné in July, but had strong performances in the race. Roglic was leading on the penultimate stage when he crashed, and he didn’t start the final stage as a precaution. Better to minimize the chance of making an injury worse than to win (or potentially still lose) the Dauphine and also take yourself out of the Tour de France. Bernal had strong performances in races before the Dauphine and dropped out with back problems to rest before the Tour de France.

Ineos Grenadiers and Jumbo-Visma both have tremendous teams to support their yellow jersey favorites, as well as legitimate contenders working as lieutenants. While having a designated all-for-one game plan prevents rivalries within the team, having multiple riders capable of winning gives a team more strategy options and makes life more complicated for all the other teams. Despite name changes, the team that was Sky and is now Ineos Grenadiers has won seven of the last eight Tour de France yellow jerseys, with four different riders. They know how to create a winning Tour de France squad. Defending champion Egan Bernal has a Grand Tour winner for a lieutenant, in 2019 Giro d’Italia winner Richard Carapaz. His other teammates include former World Champion Michal Kwiatkowski and young Russian Pavel Sivakov, who was impressive in La Route d’ Occitanie and the Critérium du Dauphiné.

Roglič has Tom Dumoulin, who won the Giro d’Italia in 2017 and finished second in the 2018 Tour de France. Add to that, he will be supported by Wout Van Aert, who won Milano-San Remo, Strade Bianchi, and a stage of the Critérium du Dauphiné already this year. And don’t forget American Sepp Kuss, winner of the final stage of the Critérium du Dauphiné on a summit finish.

From top to bottom, Jumbo-Visma looks like the most formidable team in the race, particularly when it comes to riders who have already had success in the shortened 2020 season. But that’s also where the potential weakness lies. The unknown variable for me is whether the riders who have been successful since July have the depth of fitness to stay at the top of their game through three weeks of racing. Or will someone like Frenchman Thibaut Pinot (Groupama-FDJ), who has been top 5 at Paris-Nice, Route d’Occitanie, and the Critérium du Dauphiné this season, come into winning form in September instead of July-August?

For a Great Race, Tune in for La Course!
I’m really hoping for a multi-stage professional women’s Tour de France in the coming years, and until then we can all tune in for the exciting La Course one-day race. Held on Sunday, August 30 in Nice, the course isn’t too hard (some riders criticized it as too easy), which means more potential contenders. When the course isn’t hard enough to create separation, the riders have to do it by making the race hard. We’ve already seen some great races from the women’s peloton this season, and I think that between Stage 2 of the Tour and La Course, the more enthralling event on Sunday will be La Course. Newly crowned European Champion Annemiek van Vleuten looks hard to beat, but you can never discount multiple World Champion Marianne Vos. If it comes down to a sprint, look for Marta Bastianelli vs. Chloe Hosking, or for Elisa Longo Borghini to ride away from the whole pack.

I hope you’ll stay tuned for two posts per week from me during the rest of the Tour de France, Thursdays and Saturdays. My hope is to provide some insights on the race that relate back to your training and preparation for personal or competitive goals. Stages I have earmarked on my calendar as “do not miss”:

Stage 4: First summit finish. Not hard enough to separate real contenders, but hard enough to expose a few pre-race favorites who aren’t as ready as we (or they) thought.

Stage 17: Climbing the Col de la Madeleine is hard, but the final climb to Col de la Loze, from Meribel, features incredibly steep pitches (18-22%) on a narrow path leading to the finish.

Stage 20: The only time trial in the event, with 30-ish kilometers of flat/rolling terrain leading into a 6-kilometer climb at 8.5%.