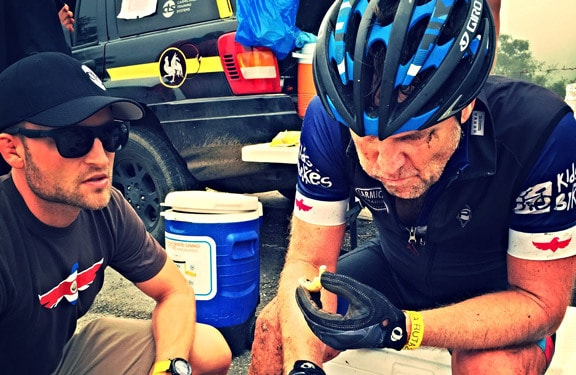 ‘This race will take all of the grit, guts and determination you have’. I can remember these words being belting out over the loudspeakers by Leadville Trail 100 race director Ken Chlouber in front of a packed gymnasium of nervous athletes. While Ken was most likely referring to one’s character, the ‘guts’ part of his speech can now take on a more literal meaning thanks to Dr. Martin Hoffman, who published a study in the International Journal of Sports Physiology and Performance. And although the study specifically examines ultramarathoners, the findings – and the pieces of advice below – are relevant to any athlete participating in long-distance training sessions or events.
FREE POWERTAP P1 PEDALS WITH NEW PREMIUM COACHING SIGNUP
You’ve been waiting for the newest power meter on the market, and CTS has it! We have a very limited number (fewer than 25 left), and new athletes can a set of these power meter pedals FREE ($1200 value!) by signing up for a 6- or 12-month Premium Coaching Package (or Ultimate). View details.
The study examined the factors related to the successful completion of the Western States and Vermont Trail 100 mile runs. Utilizing a post-race questionnaire, the researchers looked at host of factors – including training volume, maximum long run volume, the use of NASIDs, age, BMI, years of experience, number of 100 mile races completed and others – to determine what correlations can be made for those who finished vs. had to drop out (or ‘non-finishers’, as the researchers dubbed them).

As a coach and ultramarathoner, their findings were somewhat surprising and interesting. One of the most interesting findings was the havoc nausea and/or vomiting causes for both finishers and non-finishers during the events. When the non-finishers were asked what caused them to withdraw, 23% reported ‘vomiting and/or nausea’ as the culprit, more than any other factor. As a comparison, the total number of people citing injury, blisters, muscle cramps, and exhaustion was only 21.6%. This means that more people dropped out of the two races due to GI distress than injury, blisters, cramps and exhaustion COMBINED! WOW!

As it turns out, even the finishers were not immune to GI distress. In fact, both the finisher and non-finisher groups reported nausea and/or vomiting as their top 2 responses when asked to choose ‘problems that impacted race performance’ (at 36.8% and 39.6% respectively). As the researchers point out, preventing and minimizing GI distress is a critical, if not the most essential, success factor in a 100 mile ultra marathon. As a coach, this is encouraging because most GI distress is preventable with proper training and nutrition.

Here are a few tips I use with my athletes – ranging from cyclists to triathletes and marathoners to ultra-marathoners – to get the most from their guts.

Practice makes perfect
At least twice per week, preferably during your longer workouts, you should practice your game-day nutrition plan. Make sure to go through the whole plan during the training at some point. If you plan on switching from gels to real food during the race, then practice that and see how you react.

Find Your Gut’s Limitations
All competitors want to go fast and want to go long. They push their bodies in these areas. However, most of them do not push their guts to see what they can tolerate. I’ll revert to the research: only 0.7% of non-finishers reported ‘inadequately trained’ as the reason for the dreaded DNF (that’s not a typo: point-seven percent, less than 1 percent). A whopping 23 % cited nausea as the offender, nearly 33 times the amount of ‘inadequately trained’. So if you want to finish, you need to train your stomach as well (if not better) than your lungs and legs. I have my athletes do this by taking in more calories than they usually do in at least one training session per week. If you normally take in 200 calories per hour, try 300. Try to find the limit of what your gut can accommodate and perform well with, and then test those limits.

Find the exceptions
We spend a lot of time planning nutrition strategies for athletes, but rarely does an event-day nutrition plan happen exactly as you’ve drawn it out on paper. That’s why part of the “planning” has to include what do when the plan goes awry. You better know what types of foods and fluids you can switch to. Do this by experimenting with different foodstuffs and drinks during training. What you are looking for are the things that definitely won’t work. That way, when you come up to the aid station buffet line at mile 80, you’ll know what one or two things to pick up out of the hundreds of options normally available. My favorite way to do this is to buy calories and fluid from grocery and convenience stores along my long workout route

Rolling On Wheels Of Wood