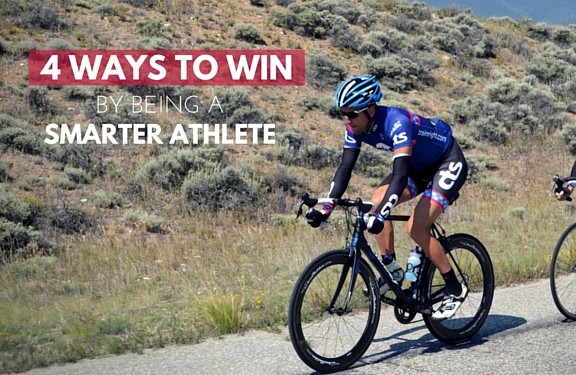 The end of March is a great time of year for endurance athletes. There’s so much enthusiasm in the air, so many incredible goals being set, and so many early-season triumphs to cheer about. For coaches, this is the time when we get to talk about race tactics and strategies, in addition to power numbers and fitness markers. For me, that’s the fun stuff. I like the science of training, but I love the passion for winning.

Here are a few of the things I’ve been telling athletes over the past few weeks. It doesn’t matter if you’re lining up for a business park criterium, the Saturday Morning World Championships, a 70.3 triathlon, a marathon, or just an important training session. There’s something in here for everyone.

1. If You’re Taking Pulls at the Front and You Get Dropped, It’s Your Fault

This was drilled into my head when I was in a breakaway in a small race in Europe about 30 years ago. My director pulled up alongside me in the car and told me to stop taking pulls. I didn’t listen. He pulled up alongside me again a little while later and told me that if I kept pulling and got dropped from the break because of it, then I was just an idiot. That got my attention. I thought I was being smart and doing the honorable thing by continuing to pull through. But it was a race, and the finish was what mattered.

Coaching Special: Use Your Tax Refund as an Opportunity to Invest in Yourself
Save $199 when you sign up today for 6 months of Select Coaching for a one-time fee $995 or save over $350 when you sign up for Premium Coaching for a one-time fee of $1795.
If you’re sitting on and still get dropped, then the riders with you were just that much stronger and there was nothing you could have done to change the outcome. But if you get dropped from the break, or the peloton, by your own doing, that’s just bad tactics. I’m not saying you should just suck wheels all day and then sprint for the win, but you have to find that balance between contributing to the pace making and saving enough energy to be a contender at the finish.

This has been a mantra of mine since I was a kid. And people seem to grasp the concept when there’s a stiff headwind or crosswind, but then they forget about it when the wind is at their backs or the pace slows down.

Drafting is about conserving energy so you have more power for crucial moments later on. Don’t drift out of the draft in tailwind sections; stay on the wheel and coast. Save energy. Don’t get lazy when the pace is low, stay on the wheels. When you stick your nose into the wind, make sure it’s for a good reason.

3. Stay Focused All the Way to the End

Whether you’re in the middle of a hard training block, a stage race, a weekend omnium, or even a training camp, it’s important to continue to stay focused on nutrition and hydration in the final hour. Too many athletes start “smelling the barn” about an hour out from the end of a long ride or race.

2016 Camps Are Selling Out! Book Your Spot Now!
CTS All-Inclusive Spring Training Camp is SOLD OUT! Don’t miss your chance to join us for an early-season Spring Training Camp or Climbing Camp! Make your reservations and travel arrangements early, and rest assured your early-season fitness is taken care of. Camp Calendar
They stop eating and drinking, figuring they’re almost home and they can just handle it later. And sometimes it’s an economic decision; functional foods like gels cost money, so people figure they’ll save that last gel for tomorrow’s ride instead. It’s a mistake.

The final hour is when you’re glycogen stores are likely depleted, your hydration status is compromised, and your core temperature is likely to be elevated. By keeping that food in your pocket and bottle in the cage, you’re just adding to the recovery work you’re going to need to do in order to perform well the next day.

4. Be Honest About Your Weaknesses

I recently had a long conversation with an athlete who favors himself to be an excellent climber. But he’s a terrible descender, and he’s not doing the work required to improve. So he leads the peloton over the summits of the first few climbs and chases back after the descents, but later in the race he can’t chase back to the lead group anymore and his race is over.

Ride Colorado with Best of USA Pro Challenge Race Experience!
We’ve worked with the USA Pro Challenge to create a 6-stage, nearly 600-mile route that encompasses the best climbs from iconic stages of the race. Keep the spirit of the USA Pro Challenge alive as we look forward to the race’s return in 2017! Details
Training your strengths is easy. It’s fun, and it feeds your ego. Winning is never easy, but it’s the most fun and even better for your confidence. If you want to win, you can’t just do the fun stuff in training. You have to do the work that pushes you outside your comfort zone and builds the skills and fitness that will support – and even elevate – your strengths.

Always remember that performance is more than power numbers and that while fitness is a necessary component of winning, it’s your passion and intelligence that matter even more.

Train Right: The Pros and Cons of Protein Powders

5 Tips for Riding with New Cyclists