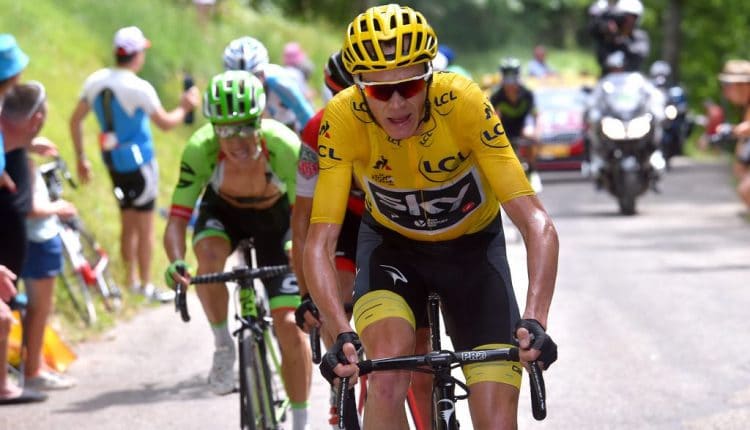 Tour de France organisers have formally blocked four-time champion Chris Froome from competing in this year’s race, Le Monde reported Sunday, but his team promptly vowed he would be at the start line.

Cyclingnews.com quoted Team Sky as responding to Sunday’s report that they are “confident that Chris will be riding the Tour as we know he has done nothing wrong.

The Team Sky star has been under a cloud since he was found to have twice the permissible amount of asthma drug Salbutamol in his system during September’s Vuelta a Espana, which he won.

Five-time Tour winner Bernard Hinault, who worked for the Tour organisation for many years, last month called for the peloton to strike if the British rider lines up at the start of this year’s event next Saturday.

Froome responded on Wednesday that he will compete in this year’s race despite the shadow cast by the case hanging over him and his team confirmed as much on Sunday with their statement.

The decision on the organizers’ attempt to prevent the Kenyan-born Briton from taking part is expected to be made by the French National Olympic and Sports Committee, which is to make a ruling Tuesday, Le Monde said after the last-ditch bid to exclude him. Technically, while Froome awaits the result of an ongoing investigation into his Salbutamol case, he can still ride on the Tour.

Amaury Sports Organisation (ASO), the organizers of the iconic Tour, refused to comment on the report although AFP has had confirmation of information they say backs their view that the defending champion should not be allowed to race.

According to the letter of the rules, Froome is authorized to ride until a final decision from the anti-doping tribunal of the International Cycling Union regarding his ongoing case.

Le Monde says Froome will not necessarily attend Tuesday’s meeting by the French committee with their ruling due Wednesday.

He is to be defended by British sports lawyer Mike Morgan, a French speaker, before the UCI tribunal.
Sky, ASO and the French Olympic Committee will each choose an arbiter to decide whether Froome should be allowed to start the Tour.

According to Tour statutes, organizers may ban a rider or a team if their presence is seen as liable to damage the image or reputation of the organizers or the event.

UCI president David Lappartient reacted to the story on the sidelines of the French national championships.”For the moment we have here a leak in Le Monde. I have always said we would make known the general position of the UCI before the Tour and that will be the case. It begins next Saturday so we shall explain our position during the coming week,” Lappartient said.

Tour de France race director Christian Prudhomme said Friday that in the absence of a ruling against the rider the organizers “evidently expects to see Chris Froome at the start line on July 7,” adding that, “legally, he can. “Team Sky have yet to unveil their eight-strong team.

Froome, who denies wrongdoing in the wake of his “adverse analytical finding” on September 20 last year, is out to emulate five-time winners Hinault, Jacques Anquetil, Eddy Merckx and Miguel Indurain.

A win this year would make Froome the second racer after Merckx to win four straight Tours.

American Lance Armstrong finished first seven straight times, but those results were retrospectively scrubbed out because of drug use.

Hinault, whose 1985 win gave the host nation its last title, sees Froome as a “cheat”, a stance Team Sky decried.
Froome’s Giro win in May made him the first man to hold all three Grand Tours at once since Hinault himself in 1983.

But Le Monde commented that “the Tour de France wants to avoid at all costs finding itself in the same situation as at the recent Tour of Italy where Froome’s final win is now marked with an asterisk.”

Spanish rider Alberto Contador, stripped of his 2010 Tour de France and the 2011 Giro after testing positive for clenbuterol at the former to earn a 2012 ban — he blamed the result on contaminated steak — has lamented the slowness of the case.

“It would have been better for everyone if the Froome affair had been resolved much more quickly,” he told French sports daily l’Equipe on Friday.

AN AUSTRALIAN MAY BE FRANCE’S NEXT TOUR DE FRANCE HOPE