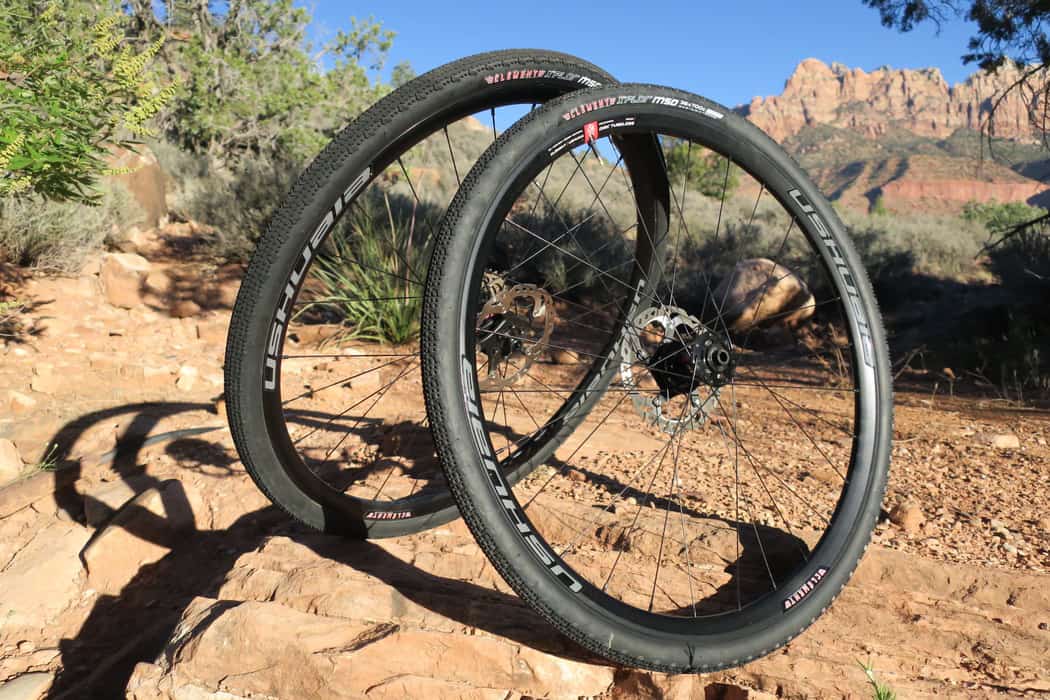 Maker of some of the most popular adventure/gravel tires on the market, Clement is now extending their reach beyond rubber and are launching two new wheelsets named Ushuaia and Ushuaia SL. Both wheelsets use aluminum construction and are specifically designed with mixed-surface riding in mind.

Clement gave us an opportunity to get some big miles on the $650 Ushuaia during a media event called the Beehive Ride, which over the course of three point-to-point rides traveled from Fruita, Colorado through Utah to finish outside of Zion National Park. We’ll have much more about the ride itself soon, but for now we’ll stick to the wheels.

There were a few key elements that Clement wanted the Ushuaia to bring to the market: a tubeless-ready design, wide rim profile for large tires, and finally, offer these things at a lower price point than what’s currently available. Clement Product Development Manager Johs Huseby told us, “We felt there was a hole in the market for a wheelset at this price on the consumer side and the OE”.

The Ushuaia uses a hookless rim design with a full 23mm internal width and 26mm external width, along with a 25mm depth. Claimed weight is 1620 grams for the set. For the hubs, both front and rear use 28 spokes with angled flanges that are designed to decrease stress on the head of the j-bend spokes. If a spoke does break down the road, there is nothing proprietary about them, so any bike shop can make the fix.

Compatibility is wide ranging, as long as you’re not using rim brakes since disc is the only option. Both Centerlock and 6-bolt disc options will be available, and no matter if you have a quick-release, 12mm or 15mm front thru-axle, you’re covered. On the rear, either 12×142 or quick-release can be used. Those wanting to use an XD body are in luck since that option will also be available. Even though Clement would surely like to see their customers using the wheels along with their tires, there is nothing about the rim that keeps any other brand’s tires from being a perfect fit as well.

The lighter-weight Ushuaia SL will be coming later next spring and should weigh right around 1500 grams for the set and have a price tag of $850.

FROM PARK TO PARK
Clement set us up on the 36mm X’LPOR MSO tubeless-ready tires mounted to the Ushuaia for the three days and 200 miles that went from one National Park to the next over dirt roads that few cyclists have ridden. Having this much time on the product provided the opportunity to play with air pressure and see how low we could go for the rougher dirt sections without flatting.

Each day consisted of around 30% of pavement while the rest was on varying conditions of dirt, from ultra manicured smooth stuff to make-your-spleen-bleed violent washboard. For most of the riding we went with 40 psi, but as the conditions deteriorated the pressure went down to as low as 25 psi for the first day’s main descent that had half-buried, softball-sized rocks just waiting to bounce you off your line and have you making a dirt angel in the red clay.

Between the extra-width of the Ushuaia, along with going tubeless, the setup made a considerable difference in warding off flats at that low of pressure. We did have one contact of rock on rim, and we expected it to result in a flat, but it turned out that it would take more than that to stop us. After three big days the wheels came out of things still true and spinning smooth. We never experienced tire burping when running low pressures or loss of pressure during the ride.

At a rather respectable weight, and a very respectable price, the Ushuaia delivered everything we could hope for in a wheel designed around mixed-surface riding. It brings all the features that some of the latest carbon wheels have that are targeting this segment, just at a more reasonable price.

A CYCLING ROAD TRIP THROUGH UTAH: THREE DAYS OF ADVENTURE IN THE SADDLE