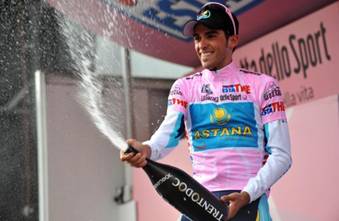 After the race Contador was congratulated on the podium by Jaime  Lissavetzky, Spanish Minister of Sports, and by Kazakh Minister of Defense  Daniel Akhmetov. A Kazakh delegation followed Alberto Contador’s performances during the last week of the Giro. Tomorrow in Spain there will be a series of  festivities to honor Contador with a warm reception by the authorities of  Madrid and Pinto.

‘Incredible.’  Alberto Contador must have used this word a  thousand times during this Giro d’Italia. It is indeed difficult to believe  what he accomplished, knowing only eight days in advance that he and his  teammates would participate in this demanding event. He showed himself  vulnerable and  did not win a stage but was simply overall the best. ‘I  never saw Indurain on the bike, as I was still a child when he rode, and in  that time I played football and athletics, but yes, I am super proud that I  follow in his footsteps.’

Team Manager Johan Bruyneel was more than proud as well.   ‘No one in their right mind would think that a professional cycling team with  one week’s notice could even participate in a Grand Tour, let alone come out  on top.  My hat is off to our whole team, and to all our staff that came  together on such short notice to make this possible.  As for our riders,  well they saw opportunity where others saw no chance whatsoever.  We  will toast this victory tonight, not only for Alberto Contador, but for the  Astana Team as a whole.’

Alberto Contador added: ‘It is amazing what the others did for  me. Riders like Levi Leipheimer and Andreas Klden, who are potential Grand  Tour winners themselves, worked for me like all other teammates did:   Assan Bazayev, Toni Colom, Vladimir Gusev, Maxim Iglinskiy, Andrey Mizurov  and Steve Morabito. A sick Andreas Klden did so much for me. I didn’t know  him well before this Giro. I think I have found a new friend.  It is amazing how we all grew close to each other during these weeks.’

Johan Bruyneel: ‘Many fans and pundits rightfully wondered if  Andreas Klden would be our featured rider following his recent victory in the  Tour de Romandie.  I say he was a champion here because he willingly  took on the roll of ?super domestique’.  Unfortunately he came down with  a respiratory infection mid-race, but managed to play a decisive role for  Contador in Stage 19 before having to abandon.  We could not have won  without him.’

The sports directors Alain Gallopin, Sean Yates and Alexandr  Shefer always hoped that the team would eventually be allowed to race in the  Giro, but to be told just one week prior was definitely not on their wish  list. Johan Bruyneel:  ‘ We have faced many challenges over the years,  but none as difficult as putting together a squad with just seven days  notice.  This, coupled with a very difficult first week’s racing, tested  our team in ways we could never have imagined.  To say I am proud of our  staff and riders is truly an understatement; they accomplished the impossible  and yet did it in the most professional manner I can think of.’

2008 seems to already be a perfect year, even without the Tour de  France. ‘No I don’t think Tour the France will change their mind,’ said  Alberto Contador. ‘Now I hope to finally take my holiday. Anyway I hope that  the Tour directors have watched this race. And this pink is maybe nicier than  yellow, as I didn’t expect this. On the other hand, the Tour is definitely a  harder race.’

‘It is often said that actions speak louder than words,’ said  Johan Bruyneel.  ‘Today I hope that the ASO takes firm notice of the  actions of the Astana Professional Cycling Team, not just in our victory at  the 2008 Giro d’Italia, but also how professionally we have conducted  ourselves throughout the entire season. This is the proof.  We have  taken a team of riders and staff and under the most arduous of situations won  one of the most important bike races in the world.  I cannot be prouder  of any of them, nor can I understand why we cannot be allowed to defend our  title in the Tour de France.  Alberto Contador is our champion, and he  is supported by an amazing group of people.  This is a victory for the  ages, and we will continue to build upon it ? that you can be sure of.’

The Team Manager witnessed the evolution of a great  champion.  ‘Alberto Contador literally went from opening a beer on the  beach while on vacation a few weeks ago in his hometown to popping the cork  off a bottle of champagne in Milan atop the final podium at the Giro  d’Italia.  This is unprecedented.  He didn’t preview the stages, he  didn’t ride the mountain passes, and neither he nor his team were close to  top form when the race began.  And so they raced with their heads as  much as their legs, knowing when they needed to lead and when they needed to  conserve their energy.  We knew it would be close, but yet we also knew  we had the reigning Tour de France champion.  As we saw with Lance Armstrong,  great riders can bring out the best in their teammates.  Alberto  Contador did just that in the 2008 Giro d’Italia, and we look forward to the  days ahead.’

‘I remember when I first called Alberto while on holiday.   After telling him we needed him to ride the Giro, he said honestly, ?OK,  we’ll wait and see’.   And that’s just how we ran the race.   We waited, raced into form, and now we see him atop the podium in Milan!’

‘This year has been very interesting to me and Team Astana.  Coming off of multiple years before when we won the Tour de France with our  formula, we have now had to face a lot of adversity and challenge upon  challenge in 2008.  And yet here we are, with 16 victories this year, as  well as the #1 and the #3 finishers in the most recent Tour de France.   And now we have won the Giro d’Italia in a true team effort, with Alberto  Contador leading the way.  Where do we go from here? Regrettably we do  not have much say in that decision.  But wherever it is, know this: we  will come to win, period.’

Effort Kicks Off With 1,000-Bike Donation For Both Republican and Democratic National Conventions