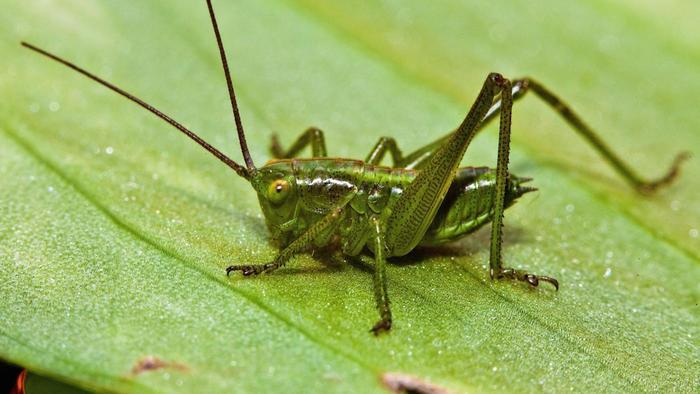 Have you ever eaten crickets? Does that fall into the vegetarian category? Did you know there are new protein bars made with cricket flour that supposedly taste really good? Sports Nutrition is ever evolving and new protein bars made with cricket products are now popping up on store shelves all over the U.S. Bring up the subject of eating insects, and people immediately think of a scene from the television show Fear Factor. So who really eats insects and where is this cricket thing coming from? Approximately one-third of the world’s population sits down to enjoy a meal of insects on a regular basis.

But you know what? You’re ingesting insects, too… you just didn’t know until now. U.S. citizens end up eating more than a pound of insects per year. What? How? Because they are in the processed foods, fruits and even the Starbucks coffee you are ingesting. Tomato soup, peanut butter, chocolate, noodles, Starbucks Strawberry Frappuccino’s — anything processed. How is this possible? Because the FDA makes certain allowances for so many insects per so many food products. But why would they do that? Because insects are here, all around us, sometimes they make their way into food processing plants and end up in our food containers. In the case of Starbucks, the red dye comes from a bug called cochineal. 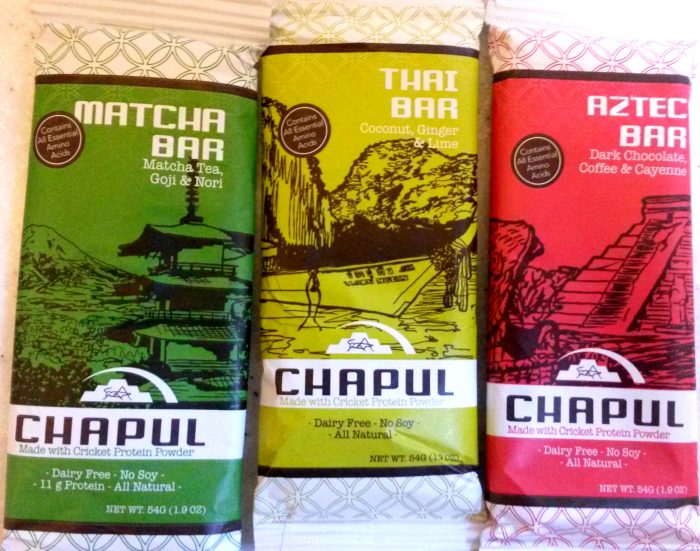 Most protein bars are made with proteins from cow’s milk – either casein or whey protein. There are some issues with milk proteins, including allergies, expense and most vegetarians will not eat them. Vegan bars have been popular as of late: NAKD, RAW BITE, VEGA SPORT, PALEO CRUNCH, etc. The makers of these bars must source alternative proteins for these bars: pea protein, vegetable protein, rice protein, soy protein, chia protein, hemp protein and the list goes on. The disadvantages of vegetarian sources of protein are that they are more expensive to manufacturer and lack a complete amino acid profile. Cricket protein, on the other hand, is very comparable to dairy and chicken protein.

CRICKETS TO THE RESCUE
Energy and protein bars represent a large segment of the sport food market. The evolution of sport bars in the future will involve alternative protein sources. There is a lot of interest in using insect protein in our commercial products. Many countries like the Netherlands are leading the way. Sport bars such as Gyro, Exo-Protein, Chapul bars, Crowbar protein, Bitty Cricket flour cookies, are already on the market. The cricket flour used to make protein bars is composed of 65% protein, which is on par with beef and chicken meat. Even more, they contain 6.3 mg of iron per 100 grams, and B vitamins as well as essential fatty acids. Cricket flour has a neutral taste that makes it ideal for not altering the taste of whatever it is mixed with.

Another cricket caveat is that these crickets are not rounded up in the wild, rather they are domestically farmed much like poultry and fed a grain based diet. They’re dried or roasted and then milled into a fine flour. Finally, if you have a shellfish allergy, however, beware! Crickets are genetically similar to crabs and shrimp and could also spark an allergic reaction.
TOP TEN REASONS TO EAT CRICKETS
1. Eco-responsibility. Consuming insects contribute less to global warming as they spew out less greenhouse gases. Insects for commercial use are raised on specialized farms, rather than taking them from the wild. And these farms take up far less space than animal farms.
2. Insects constitute an alternative source of industrial protein powder and can decrease the amount of milk protein used.
3. Insects possess an exceptional nutrient density: vitamin B12, iron zinc, magnesium, proteins, essential fatty acids (omega 3 and 6 and 9), and fiber.
4. The consumption of insects are compatible with most vegetarians (not vegans).
5. The extraction of proteins from insects is done via “soft technologies” such as pulverization, centrifugation, and cooking at very low temperatures in order to not disrupt the protein structure.
6. Cricket flour possesses a neutral taste that does not generally alter the taste of the food product.
7. No significant health problems have arisen from the consumption of edible insects. Insects are far more distantly related to human beings than pigs and cattle and it’s far less likely that the pathogens that affect insects would affect us.
8. Protein quality. The big question in this whole discussion is whether or not the quality of insect protein is a good substitute. In fact, it is very good, nearly comparable to meat or dairy. One kilograms of grasshoppers has about the same number of calories as hamburger meat.
9. People who are allergic to dairy and soy can tolerate cricket flour just fine.
10. Innovative companies have recently been pushing to add insect protein into our foods. Insect protein represents a hope for resolving the problem of protein consumption in the world.
WHY EAT INSECTS?
Why not eat insects? Well first, what are insects? Insects are animals that walk around on six legs. There are easily two million species of insects on this planet, outnumbering humans 200 million to one. In fact, of all animals on Earth, eighty percent walk on six legs. We’re not on a planet of men, but we’re on a planet of insects. Insects are not only there in nature, but they also are involved in our economy, usually without us knowing; think pollination. A third of all fruits that we eat are a result of insects facilitating the reproduction of plants. Insects control pests, and they’re food for animals. Small and large animals eat insects. Even larger animals eat insects. But the small animals that eat insects are being eaten by larger animals…; the cycle of life.
Now the situation in the world is going to change for you and me, for everyone on this Earth. The human population is growing very rapidly. Currently, we have somewhere around six billion people, anticipated to grow to nearly nine billion by 2050. That means that we will have a lot more mouths to feed. We would need an agricultural production increase of more than 50 percent. Even more, we’re also getting wealthier, and anyone that gets wealthier starts to eat more meat. It’s possible that we could better balance the amount of protein we eat by adding in insects.
The Limits of Consuming Insects
• There does exist a psychological phobia of eating insects (even though we consume them all the time).
• Protein bars made with insect protein are not recommended for people with allergies to shellfish as they may have a similar reaction.
• The consumption of edible insects on a very large scale could affect insect biodiversity. This is the reason some countries, like France, have not yet permitted insect-containing food products (even though they eat a lot of frogs and snails).
• Most meals made with whole insects taste very different than what we are used to eating. Using insects for things like cricket flour seems to be the best option for increasing protein in our food while not affecting taste.
• Protein quality depends on what the crickets eat. When they eat grain, like most factory-farmed chickens, the protein quality increases compared to when they eat their natural diets.

Being There: Roval Wheel Launch