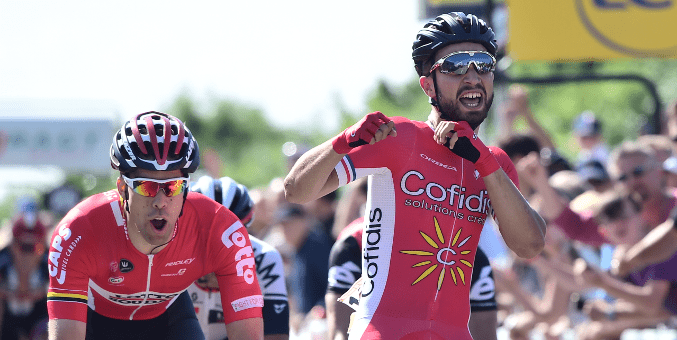 Frenchman Nacer Bouhanni won a sprint finish on the opening stage of the Criterium du Dauphine on Monday, and
dedicated his success to deceased boxing legend Muhammad Ali.  The 25-year-old is a keen amateur boxer and his first thought after crossing the line at the end of a 186km trek from Cluses to Saint-Vulbas was
for Ali.
“It’s important for me to dedicate this victory to Muhammad Ali,” said Bouhanni, who took up boxing at six years of age, although his hero back then was another American heavyweight great, Mike Tyson. “Mike Tyson was my idol but Ali’s was the only poster I had in the house,” said the Cofidis rider. “They’re two legends. I have a lot respect for the person Ali was. And on a sporting level, he was pure class.”
Ali died on Friday at the age of 74 after a long battle with Parkinson’s disease.
Bouhanni still trains in the boxing gym when he’s not on his bike.  “I’ve done it since I was small. With cycling, they’re two completely different sports. But they’re warrior sports, for me they’re the two toughest in the world.”

Bouhanni had a robust battle before claiming victory in a mass bunch sprint as Sunday’s prologue winner Alberto Contador held onto the leader’s yellow  jersey. Belgian Jens Debusschere finished second with Ireland’s Sam Bennett third. But there was a worrying wait after the stage before Bouhanni was declared the winner after he and Norway’s Alexander Kristoff bumped into each other during a physical final couple of kilometers.

GIFTING NOT ALLOWED
The two sprint rivals — Kristoff was considered the favourite for the stage win, but ended up 11th — made contact with body and helmets at one point as they jostled for the racing line.  “It’s the sprint, you don’t give out presents,” said the fiery Bouhanni, whose parents had come to the finish line to watch him. “I wanted to keep the wheel of my lead-out man, Kristoff wanted the same thing! ut I saw that we were using up a lot of energy. I prefered to hold off
and tuck in behind Kristoff. Bennett launched the sprint, he went on the right-hand side. I made my
effort and I passed him in the last 100-metres.”

Kristoff complained that he lost his momentum in the sprint finish when touching wheels with his own lead-out man.
Bouhanni also won two stages of the Dauphine last year but then crashed out of the Tour de France on the fifth stage. He has never won a Tour stage, although he has five Grand Tour stages to his name — three at the Giro d’Italia and two from the Vuelta a Espana, all in 2014.  It was the 25-year-old’s eighth victory of the season and fourth in World
Tour events.

A two-man breakaway comprised of Australian Mitch Docker and Frederik Backaert of Belgium had spent a long time out in front but were reeled in 13km from the finish of a largely flat stage.

Tuesday’s second stage takes the riders over 168km from Creches-sur-Saone to Chalmazel-Jeansagniere in the Loire.
The finish comes at the end of a 6.8km climb with a modest 3.7% average gradient. Contador took the race lead by winning Sunday’s 3.9km uphill time-trial ahead of Australian Richie Porte in second and reigning Tour champion Chris
Froome.