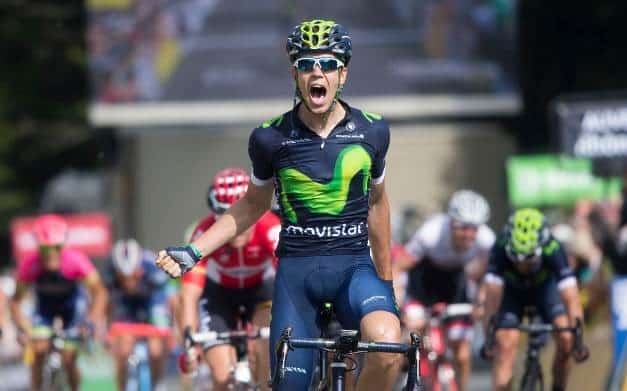 Spain’s Jesus Herrada patiently waited and then pounced to win Tuesday’s Criterium du Dauphine second stage as
his compatriot Alberto Contador held on to the overall lead. Movistar’s Herrada overhauled France’s Tony Gallopin and two other riders in the closing stages of the 168km ride from Creches-sur-Saone to Chalmazel-Jeansagniere in the Loire.
The 25-year-old champion of Spain in 2013 bided his time before usurping Gallopin, who hung on to take second, and fellow escapees Fabrice Jeandesboz and Serge Pauwels (third). “I had to wait on their wheels until the end. I didn’t want to waste my energy before, I stayed calm until the final 500m,” he said.
While Herrada can race freely in the Dauphine, unhindered by the absence of his team leaders Alejandro Valverde and Nairo Quintana, the Tinkoff team and Sky concentrated on their respective headmen Contador and Chris Froome. Sky pressed for control of the stage with two of its riders, Michal Kwiatkowski and Sergio Heano, kicking clear of the pack in the final climb to try and catch the breakaway group. But the plan failed, with Poland’s 2014 world champion Kwiatkowski quickly running out of gas.

Froome finished eighth, gaining four seconds on leader Contador, leaving the two-time Tour de France winner third overall at 9sec, with Australia’s Richie Porte in second at 6s. Herrada, sixth overall almost half a minute adrift, hailed his Movistar team as “the best in the world with Nairo and Alejandro. “But when they aren’t around, we’ve got chances. As for the overall win, we’ll take it day by day.”

REBECCA RUSCH: WHY THE QUEEN OF PAIN IS OUR HERO