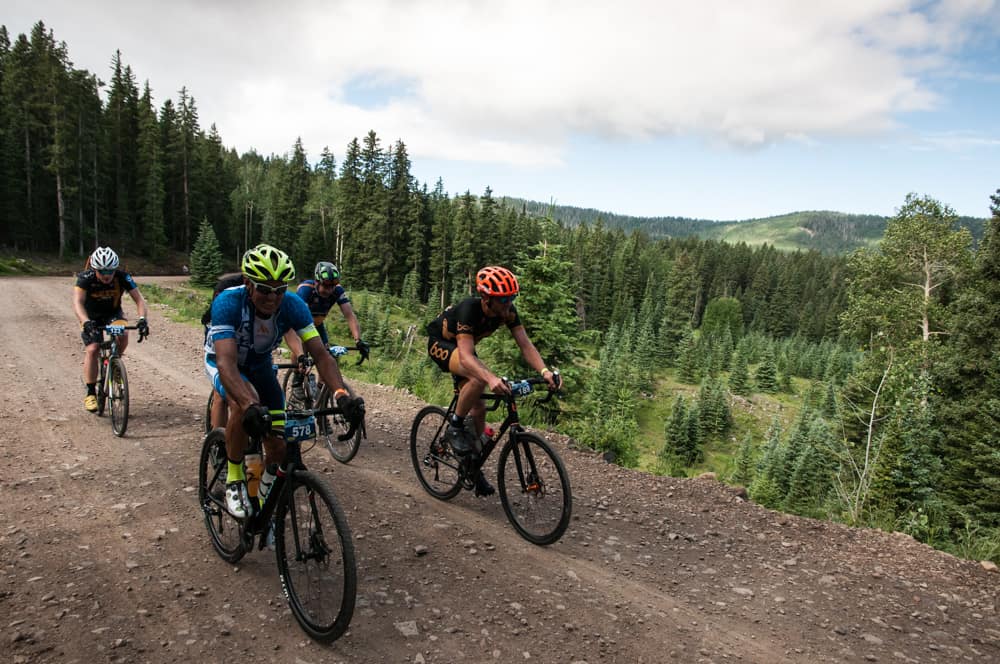 Sure, 69 miles is a long way, but come on, how hard could the Crusher In The Tushar really be? It’s far shorter than the magical 100-mile mark that seems to be the measuring stick for most cycling events. As I rode along remembering my pre-race thoughts, just 20 miles in and having already climbed 4,000 feet, I would have chuckled at my “it’s too short” notion. Of course, I couldn’t chuckle because that would have been a non-essential use of oxygen, and at 10,000 feet of altitude all oxygen is essential just to keep riding straight.

For the fifth consecutive year, Crusher In The Tushar has taken over Beaver, Utah, a small town nestled up to the massive Tushar Mountain range. This is the very place race promoter and former road pro Burke Swindlehurst grew up and sharpened his own climbing prowess. Although unbeknownst to him at the time, he concocted a route that would create an event strikingly different than anything else out there. The Crusher’s course is made up of a 60/40 split between dirt roads and pavement, with essentially two massive climbs that provide nearly 10,000 feet of vertical gain in just 69 miles. Wicked fast descending and long, often steep climbing sections end up creating big time gaps in the 600-rider field that ranges from top road, cyclocross, and mountain bike pros, all the way to first-time racers.

“Essentially, I just tried to take all of the elements I liked from road, mountain, and cyclocross racing and combined them, while also being very cognizant of trying to remove some of the elements from each of those disciplines that I didn’t like. Basically, my vision for the Crusher was to create something that would appeal to riders of all stripes and test one’s ability both on- and off-road in a single event”, said Swindlehurst.

As challenging as the course is, the hardest part is actually getting one of the 600 spots in the event. Because of limited lodging in and around Beaver, adding enough entries to keep up with demand isn’t possible, and the race fills up within hours of registration opening. Part of the draw for the elite-level riders is a hefty payday for the top-10 men, and top-5 women, but for the majority of the riders it’s the fact that the Crusher is different from anything else. “I think people are simply craving something new that challenges them in a way they haven’t been challenged before”, said Swindlehurst. He went on,”For me, what makes these events really cool is that each promoter can take their own creative liberty where they want to ensure each race can be unique and retain their own flavor”.

Part of my fascination with the Crusher In The Tushar and other events that use a combination of pavement and dirt is which bike to choose and how to set it up. There are sections of the course where a road bike with 25mm tires would be highly advantageous, but other places where it could be disasterous. A mountain bike could indeed rip down the 45+ mph washboard descent with ease, but its weight could quickly turn those time gains into losses when climbing back up the 3,000 foot ascent. Then there’s gravel/’cross bikes, which end up being the most popular option because they are the “jack of all” on a course like the Crusher’s.

Course conditions this year were some of the best in the race’s five-year history. The descent, and subsequently the climb out of the valley, can sometimes have braking bumps so large that you worry about strength of equipment as you barrel into them at dizzying speeds on the way down, and then they suck every bit of energy out of you as you struggle to maintain momentum over them on the way back up. This year though, smooth roads made it one of the fastest years yet and the first time someone riding a road bike has ever cracked the top-10.

Who was the rider that decided the bike of choice would be a road bike? None other than Sky’s Danny Pate who had decided to check out the Crusher (yes, on his team road bike) since he didn’t get a Tour de France start this year, which would have been his fifth time racing the Tour. Incredibly, his team spec Pinarello Dogma F8 with 25mm tires had not only endured the course, it flourished on it. Pate put the front group to the sword on the long descent, the very place we had all expected him to struggle the most. Knowing that he was at an equipment disadvantage and still keeping those of us with much fatter tires in check is a true testament to the skill set the former Under-23 World Time Trial Champion possesses. Even though Pate struggled from being over-geared on the steep climb late in the race, he was happy with his descending performance. “It was just like a Giro d’ Italia stage—some of those are crazy!”, Pate told me on the way to the finish.

Pick up the October issue of Road Bike Action Magazine for full coverage of Crusher In The Tushar, and our review of the bike we raced it on. To find out about registration for the 2016 event go to www.tusharcrusher.com, and follow the Crusher on Facebook.

ALL ABOUT BIKE FIT WITH PARAIC MCGLYNN