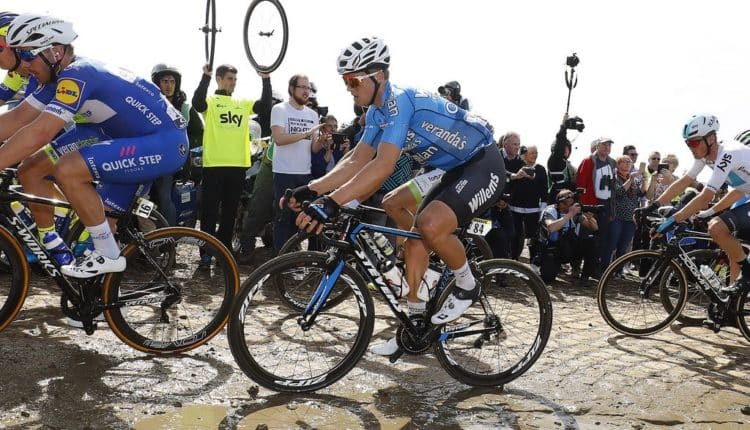 RBA/AFP – The world of cycling on Monday mourned Belgian cyclist Michael Goolaerts after he died of heart failure at the age of 23 during the grueling Paris-Roubaix one-day classic race in France. Goolaerts was found unconscious and not breathing at the side of the road on Sunday, after racing along one of the course’s famous cobbled sections.

Doctors were unable to revive him at the scene and he was flown to hospital in the northern city of Lille where he died of “cardiac arrest” surrounded by his family, his Veranda’s Willems team said. A video on YouTube which has been authenticated by AFP showed Goolaerts failing to negotiate a curve and shooting into a grassy bank at high speed. A post-mortem will take place in the next few days to determine the precise cause of death.

“According to preliminary reports it was an illness, no doubt the heart which caused the fall, it’s not the fall that caused his condition,” the prosecutor’s office in Cambrai, which is investigating the tragedy, told AFP. It added: “It’s not a criminal inquiry, it’s an investigation which aims to shed light on the circumstances of an unexplained death, as is the case when a young man of 23 dies suddenly, without the presumption of the existence of wrongdoing.” Police have asked Veranda’s Willems to make available the fallen rider’s bike and helmet to investigators.

Goolaerts came to grief at around the 100-kilometer mark of the 257-kilometer race.

“It is with unimaginable sadness that we have to communicate the passing of our rider and friend Michael Goolaerts,” his team said on Twitter. “He died of cardiac arrest, all medical assistance was to no avail.” His loss was felt especially keenly in Belgium, where the Flemish VRT broadcaster said cycling was “in mourning”. David Lappartient, president of the sport’s governing body the UCI, said on Twitter: “I would like to extend my deepest condolences to the family, team and friends of Michael Goolaerts, who left us too early today. We share their immense sadness.”

The organisers of the Tour de France, who are also in charge of the Paris-Roubaix, said race doctors had managed to reach Goolaerts within “two to three minutes”. “They tried to bring him back to life. In this type of race they administer the first treatment and then they call the local emergency services,” race organizer Pierre Yves Thouault told AFP.

Tour de France race director Christian Prudhomme said Goolaerts’ team had been delighted to receive an invitation to Sunday’s race. “They so wanted to be on the start line,” he said. “We are united in compassion for them.” The winner of the race, Slovakia’s three-time world champion Peter Sagan, paid tribute to Goolaerts on Twitter, writing: “All the thoughts and prayers of the @BORAhansgrohe team and myself are with Michael Goolaerts. Such sad news…”

Paris-Roubaix is known as the “Hell of the North” because a large section of the course is made up of uneven cobbles and the riders have to contend with thick mud in some parts. Goolaerts became a professional rider in 2014 aged just 20, and had taken part in 20 days of racing in 2018, including starting the Tour of Flanders earlier this month, although he did not finish that race. He was yet to win any major honors in the sport.

His death echoed that of another young Belgian rider, 22-year-old Daan Myngheer, who died in hospital two days after suffering a heart attack on the Criterium International race in Corsica in 2016. In 2011, Belgium’s Wouter Weylandt was killed in a crash during the third stage of the Giro d’Italia.