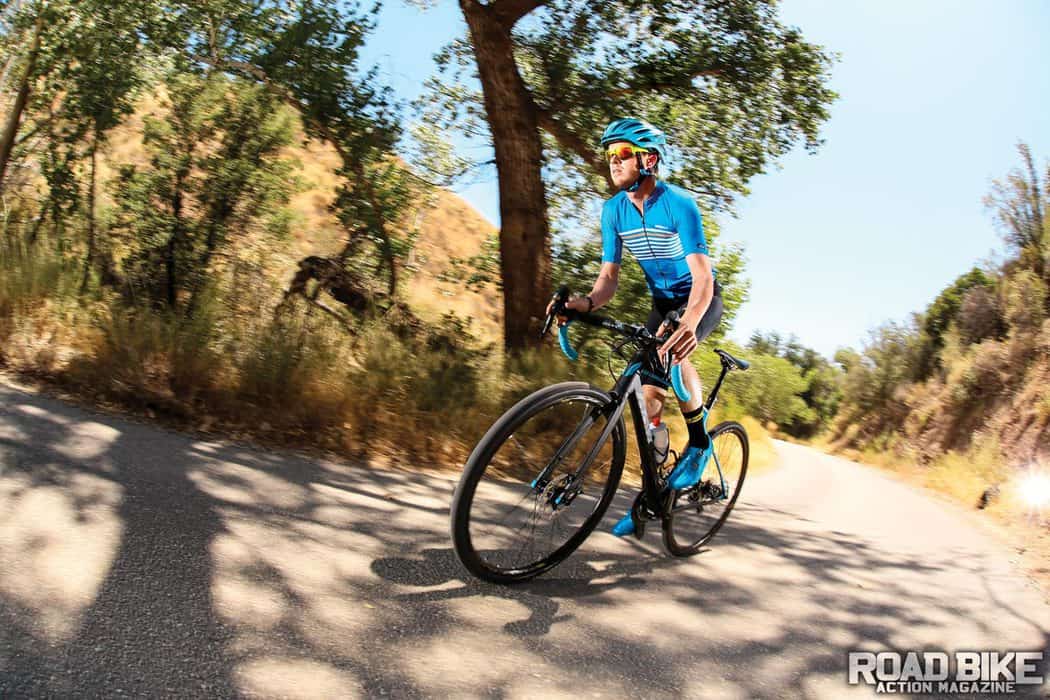 Best known for their long-travel mountain bikes, the Canadian brand Devinci has over the years begun making a move into the world of drop bars. And as the category definition of a skinny-tire road bike has begun expanding to include fatter-tire dirt bikes, it would seem that Devinci is poised for the evolution of adventure and gravel bikes to arrive at their door.

And that’s where their line of Hatchet bikes begins. The Hatchet was first launched in 2016 with three aluminum models, and for 2017 they’ve added four carbon models to their lineup. With as strong a heritage in mountain biking as they have, the brand’s dirt origins are visible in their frame geometry, as well as their aggressive off-road-oriented marketing.

The Hatchet frame is made with Devinci’s own Dual Core Fusion carbon fiber. The top tube has a graceful slope to it that is part visual and part function, with Devinci’s design plan to allow some flexibility to the top half of the frame while minimizing the flex on the bottom portion to keep the performance high.

Our 54cm bike hit the scales at 19 pounds. We were a bit surprised to find the combination of a longish 55.5cm top tube paired with a short 90mm stem (a rider-positioning trend gaining massive popularity in the mountain bike world). Also worth noting is the longer wheelbase than the average at 104cm.

The Hatchet has a very clean look to it, as all the cables are routed internally through an intake port in the downtube. We like that Devinci makes six different covers for the port to accommodate all types of cables (mechanical and electric) and routing. The fork has internal routing as well for the flat mount brake line.

As the road market continues its welcome embrace of bigger tires, the Hatchet is ready and waiting for the big rubber to come with enough front and rear clearance for tires up to 40mm
(still with room to spare).

Our Hatchet test bike was outfitted with a Shimano Ultegra mechanical drivetrain that included a compact (50/34t) crank  mated to an 11-32t cassette. Stopping duties were capably provided by a pair of flat-mount Shimano hydraulic disc brakes. In the cockpit you have an aluminum FSA stem and handlebar combo with the bar width at 44cm and the stem on the shorter side at 90mm.

For the saddle, Devinci chose to go with the high-end, Italian-made Fizik Aliante R5. For wheels, Devinci chose to go with Mavic’s Aksium Disc Allroad hoops, that were set up tubeless with 40mm Maxxis Refuse tires. The tires offer little to no tread, so we did most of our riding on paved roads or smoother dirt paths. The Hatchet comes equipped with 12mm thru-axles with an easy-to-use  lever that makes forgetting to bring a multi-tool an acceptable ommission. Other notable parts are the BB86 bottom bracket and hidden fender mounts.

With both road and off-road conditions, the Hatchet has a comfortable and capable feel. The longer top tube with shorter stem gives you more of that mountain bike feel, which Devinci is known for with their background. Riding on paved roads with other road riders, the Hatchet had a very endurance feel to it, but once getting out on the dirt, it felt more comfortable and more set up in the race category for that type of terrain. Ripping downhill on paved roads with the larger tires and longer wheelbase inspired as much confidence as needed with nary a hint of twitchiness. When it came to dirt roads, the slick tires brought with them an air of needed caution.

Owing to the weight and wheelbase, when it comes to climbing, the Hatchet tells a tad different story, as riders felt like the bike was carrying more weight than you would like to. Due to the long top tube and odd spec of a 44cm-wide handlebar, some test riders thought the bike felt big for a 54cm frame.

If you plan on entering the world of mixed-surface riding, the Hatchet can get you there at a good price. The Hatchet is a comfortable-riding bike, and Devinci did a good job with their frame geometry and overall styling. For the price you get a good group of parts, though you could upgrade the aluminum wheels to shed some weight and find more performance.

There were some odd sizes, which we haven’t seen much of on a 54cm-sized bike (a 42cm wide handlebar would be an improvement), but with Devinci’s background in the mountain bike world, this could make up for some of those decisions. The tire clearance on the Hatchet is one of the largest that we have seen come on a bike, which is never a bad thing for the growing terrain that is becoming more accessible these days.