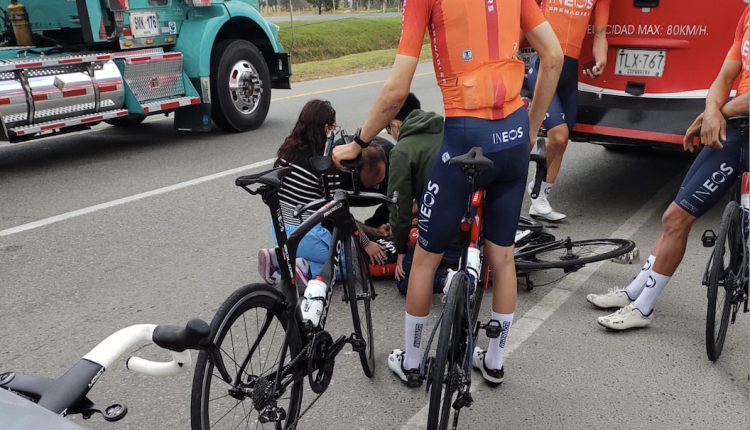 Former Tour de France winner Egan Bernal was “conscious” and “stable” in a hospital following a training accident with a bus in his native Colombia, the Ineos Grenadiers said on Monday. Pictures shared on social media showed the 25-year-old Giro d’Italia champion lying on the ground surrounded by teammates. The back of a bus with a huge dent in it is visible in the picture.

“Bernal… was accompanied to hospital by Team medical staff and was conscious upon arrival. He is stable and undergoing further assessment,” said Ineos.

The 2019 Tour winner suffered “multiple lacerations” and was receiving treatment in a clinic, the local transport police said, adding that he ran into the back of the vehicle as it pulled up at a bus stop.

The accident happened in the town of Gachancipa, around 18 miles from the capital Bogota. Just a few days earlier, Bernal posted a video on his social media accounts showing a near miss with a car while out training with teammates, and criticized the driver.

Bernal became an instant star in 2019 when he upstaged British teammate and then champion Geraint Thomas to win the Tour — cycling’s most prestigious prize. He also enjoyed a stellar season, winning Paris-Nice and Tour de Suisse. But his 2020 season was hampered by a back injury and he failed to finish his Tour defense as Slovenia’s Tadej Pogacar dazzled. Last year, Bernal switched focus and won the Giro on his debut in the pink jersey race, before also finishing sixth at the Vuelta a Espana later in the year.

He recently signed a contract extension with British team Ineos until 2026 and will return to the Tour in July.

“I feel it has been a long time since I rode the Tour. I’m really excited about going back,” said Bernal when his contract extension was announced.