Terme Luigiane, Italy, May 11, 2017 (AFP) – Italian Simone Andreetta said his embattled Bardiani team are focused on capping their controversy-hit Giro d’Italia with a stage win after he finished fourth in a sixth stage thriller on Thursday.

Second division Bardiani, invited as one of four ‘wildcard’ entries to the
100th edition of the race, were rocked a day before the start when Stefano Pirazzi and Nicola Ruffoni were thrown out after failing out-of-competition tests for growth hormones. They were sent home pending the results of a ‘B’ sample that could lead to their sacking after the race finishes in Milan on May 28. But Andreetta said Bardiani are keen to make amends, after he finished fourth on a dramatic sixth stage from Reggio di Calabria to Terme Luigiane that saw Switzerland’s Silvan Dillier, of BMC, prevail.

“We showed that, despite the shock at the start of the Giro, we’re reacting. We’re a very close group,” said Andreetta, who was part of a
five-man breakaway that outfoxed the chasing peloton. “We’ll try again, for sure”. Andreetta, racing his maiden Giro d’Italia, saw his own bid peter out six kilometres from the finish when he failed to respond to an attack by Trek’s Jasper Stuyven, who finished second. The Belgian later explained: “He (Andreetta) wasn’t doing a lot of work with us, so it was best to get rid of him in case he’d kept his energy for the finish.”

The 23-year-old Italian, however, pushed hard to keep the chasing peloton at bay by 13secs, finishing fourth to seal Bardiani’s best finish of the 100th edition. “I’m exhausted, but satisfied because I gave it my all,” he said. Italy have yet to win a stage, but Andreetta added: “Personally I feel good, but we’re all really motivated to try and win a stage at this race.” 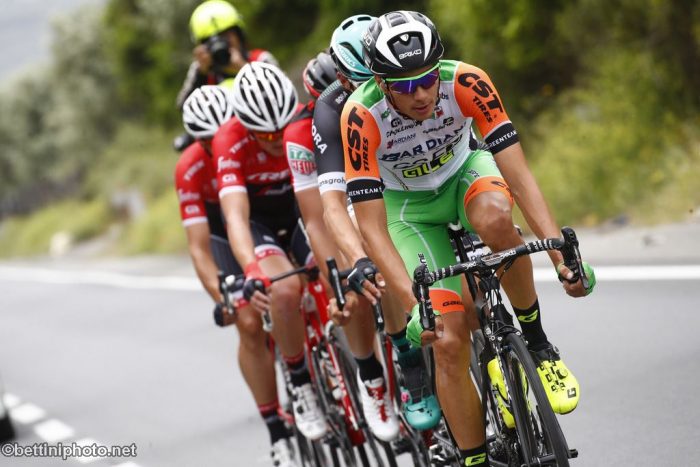