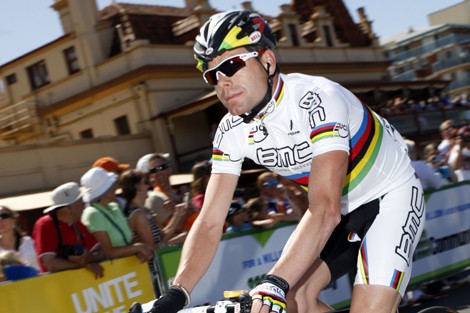 Evans Targets ?Unfinished Business’
Australia’s world champion Cadel Evans on Sunday targeted “unfinished business” in the Giro d’Italia and Tour de France after a surprise sixth place in the Tour Down Under. Evans, a two-time runner-up in France, had not expected to figure strongly in Adelaide but he shot up the standings with a third-place finish in searing heat on day three and a daring break on stage five.

“I didn’t come here with any expectations because putting pressure on yourself to perform when you haven’t done the preparation isn’t healthy,” he said. “Hopefully it’s a sign of things to come.”

Evans finished behind German winner Andre Greipel but ahead of Tour of Spain title-holder Alejandro Valverde, who is appealing a doping conviction, and Tour de France champions Lance Armstrong and Oscar Pereiro. He said he was gearing his season around May’s Giro, where he briefly wore the pink leader’s jersey during his last appearance in 2002, and another tilt at the Tour de France in July.

“There’s unfinished business at the Giro and Tour (de France) for me, and that’s been years of culminating and whetting my appetite,” he said.

Evans appeared here with new team BMC and as the first Australian to wear the road race world champion’s distinctive “rainbow” jersey. “I didn’t know what effect the rainbow jersey had on people within cycling, because I’d never had one,” he said. “It really does have a pretty amazing effect. It certainly stands out in the peloton. I just want to honor the rainbow jersey for what it is.”

However, he played down his chances of defending the title in October, when the world championships head to Melbourne, saying the course did not fit well with his riding style. “It’s a big ask. It’s not a course that suits me well enough to gear my whole year around,” Evans said. 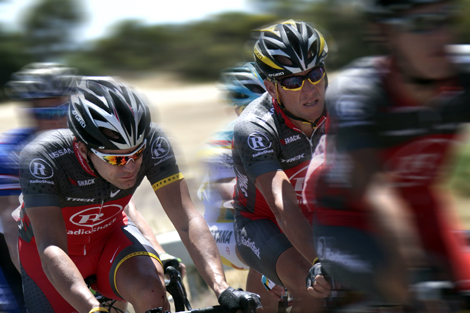 According to Bruyneel, Armstrong “feels good in the team”
(Photo: Yuzuru Sunada)

Bruyneel Says Armstrong’s Form is Better than Last Year
Armstrong finished his stage race of the season, the six-stage race around Adelaide in 25th place, a slight improvement on last year’s 29th as he gears up for his attempt on an eighth Tour de France title in July. “Having a beer with Team RadioShack,” he tweeted. “Good week here at Tour Down Under.”

Armstrong joined the new RadioShack outfit from Astana, moving with team boss Johan Bruyneel who masterminded all of his record seven Tour de France victories between 1999 and 2005. Bruyneel said Armstrong was in better condition than last year, when he returned from a three-and-a-half-year retirement, and also happier with his new team. Armstrong famously fell out with Astana teammate Alberto Contador last season in a feud that came to the boil during the Tour de France, when he placed third behind the Spaniard.

Armstrong earlier said he was happy with the trip, although it was too early to make any predictions for the rest of the season. “It’s still so early. Not much can be taken from here in terms of what happens in the summer, in fact nothing,” he said. “The main thing is we got good racing in, which equals good preparation mixed with no bad luck: illness, injuries, crashes. Smooth trip, good weather.” 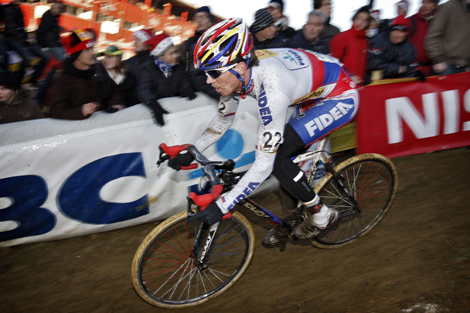 Stybar held on to his existing lead over a charging Niels Albert who closed to within 4 points of Stybar. Albert who is returning to top form from injury took victory in the final round ahead of Stybar. By finishing  second, Stybar held on to his overall lead in the World Cup. Despite not winning the overall, Albert’s win in Hoogerheide saw him finish with a 4 to 3 advantage in terms of World Cup race victories.

In the women’s World Cup, long time overall leader Katie Compton was forced out of the final two rounds due to leg cramps. This opened the door for Dutchwoman Van den Brand to take a solid lead in the competition. In the final round Van den Brand finished third behind her compatriot Marianne Vos. By finishing third Van den Brand was able to take the title by 5 points over Vos.

Final Beijing World Cup Results
Results from the third and final day of the track cycling World Cup in Beijing on Sunday: