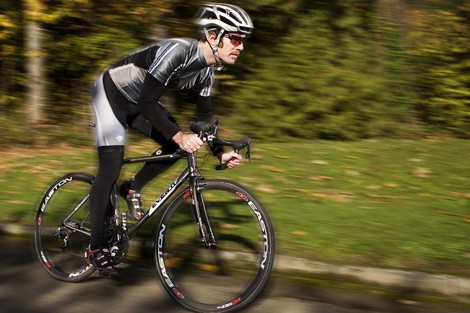 Kurt Knock has been racing and building bikes out of British Columbia, Canada, for a long time. He first started racing BMX in the 1980s before moving to mountain biking, where he raced against former World Mountain Bike Champion Roland Green. Everti was started in 2000 under the name of Epic Bicycles, but in 2005 was forced to change its name due to legal issues with the Epic name. After that brief setback, the name Everti was chosen. Everti is Latin for ‘conquer’ or ‘overthrow.’ Today, most of the production of Everti has moved to out-of-house builders in Taiwan to keep prices at a reasonable level. 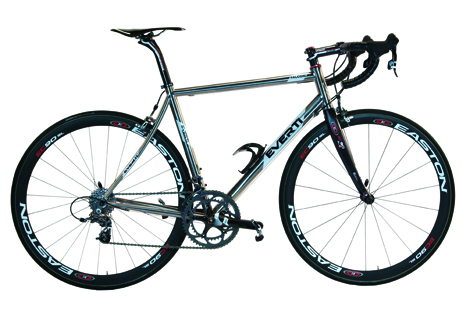 THE FRAME
Our large Everti Falcon frame was constructed using cold-worked, double-butted seamless 3/2.5 titanium tubing. At first glance, the Falcon appears to have fairly conventional round tubes. It is only upon closer inspection that one sees that every tube on the Falcon has been shaped to optimize performance. The front triangle features oversized and ovalized top tubes and down tubes mated to an integrated head- tube that has been CNC-machined internally and externally to save weight. The 68-millimeter bottom bracket shell supports an oversized 34.9-millimeter seat tube, while the chainstays taper from oval at the bottom bracket shell to round at the Breezer-style dropouts. To complete the frame, the Everti uses radius bend, tapered seat stays to take the edge off. The weld quality on the Everti is extremely good with small, even welds, and quality detail work like machined cable stops and rear dropouts. Our frame came in at 1297 grams with a brushed satin finish.

THE PARTS
Since the Falcon is only available as a frameset, we built ours to double as a test mule for a 2010 SRAM Force group, complete with a full carbon EC90 fork and EC90 SL tubular wheels wrapped in the Vredestein Fortezza Tricomp Pro Tubular 23c tires. The EC90 SL wheels feature 38-millimeter deep carbon rims, laced to Easton R4SL hubs via Sapim double-butted, black, straight pull spokes. The front wheel features 18 radially laced spokes, while the rear contains 24 radially laced on the non-drive side and one cross on the driveside. The R4SL hubs spin on Grade 3 ceramic bearings. FSA outfitted our Falcon with a complete carbon cockpit including a 110-millimeter OS-99 CSI Stem, 31.6 K-Force Light seatpost, K-Force Light Compact handlebars with Lizard Skin bar tape, K-Force Carbon saddle and even a Orbit IS ceramic headset.

THE NUMBERS
Our Large Falcon featured a 73-degree head tube and a 73-degree seat tube angle, connected by a race length 57-centimeter top tube. Chainstay length measured out at 40.5 centimeters, with a 16-centimeter-tall head tube. The Everti Falcon weighed in at 15.5 pounds without pedals.

THE RIDE
The titanium frame, Easton EC90 fork and EC90 SL tubular wheels combined for a super-smooth and enjoyable ride. The Falcon’s ride is pure titanium, and while not as stiff as some carbon offerings, the titanium frame has a lively and responsive feel that carbon and aluminum frames simply can’t match.

Climbing is where the Falcon really seemed to shine. Spinning a high cadence up climbs was the Falcon’s preferred method and allowed the rider to take advantage of the bike’s nimble feel and quick acceleration. Out of the saddle efforts were met with snappy acceleration. Descending on the Falcon was equally impressive. Not one for late braking or diving hard into corners, the Falcon’s smooth ride and long top tube made for a stable ride that asks for a more refined approach to going downhill. Counter-steering and wide arcs through corners suited the Falcon best. Sprinting seemed to be Falcon’s only Achilles’ heel. While the bike accelerated well, riders found it hard to maintain their top speed, and in the heat of battle would likely trade the ride of titanium for the stiffness of oversized carbon. Our only other complaint about the Falcon was its graphics. The raised decals easily collect road grit around the edges and are virtually impossible to clean.

The SRAM Force group worked great and will definitely give Shimano and Campagnolo a few sleepless nights. (Turn to page 50 for a complete review.) The Easton EC90 SL wheels are super light, roll incredibly smoothly and provide the required stiffness for climbing and sprinting out of the saddle. Mounted on the EC90 SLs were Vredestein Fortezza TriComp Pro Tubular tires. The Vredestein Fortezza TriComps are some of our favorite tires, and for good reason. The tires provide excellent traction in corners, not to mention they have the subtleness and smooth ride that only tubulars can provide. The FSA cockpit worked flawlessly and did a great job of shaving weight from the bike. The OS-99 CSI Stem and K-Force Compact handlebar provide a stiff and comfortable setup that drew no criticism. The K-Force Light saddle is as minimal as they come, consisting of little more than a carbon shell and titanium rails. While not for everyone, it was surprisingly comfortable, especially for those used to minimal racing saddles. The only noticeable drawback was its slickness when wet.

THE VERDICT
When we first saw the price, we thought it was a mistake. $1595 for a titanium frame is virtually unheard of, let alone one with as many high-end features and quality of workmanship. The Falcon is ideal for a racer or aggressive club rider who is looking for an alternative to carbon. Frame weight is competitive, handling is spot-on, quality is superb and the ride is pure titanium.